Tim Kaine has a refreshing (and bipartisan) approach to financial reform.

Tim Kaine has a refreshing (and bipartisan) approach to financial reform. 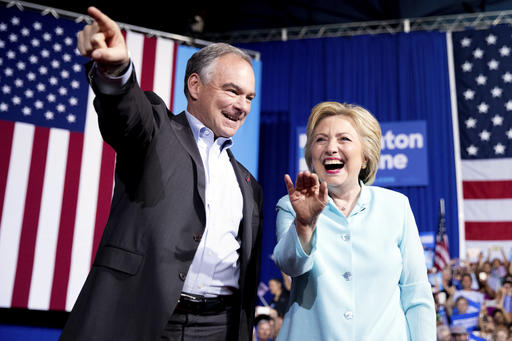 Hillary Clinton's choice of Tim Kaine as a running mate is an affront to the youthful, vibrant, leftward challenge she faced in the Democratic primary from Bernie Sanders. To those who supported Sanders, as I did, it's a bummer, and it shows something of Clinton's true colors. Yet on one of the issues Kaine is currently being pilloried for, he may come as a blessing in disguise, especially in light of his background in Catholic social teaching.

The matter in question is the big, bad banks. According to The Intercept, Kaine "goes to bat for banks"; miming essentially the same material, Common Dreams frets that Kaine "lets big banks know he's in their corner." But the material in question is not actually about "big banks." It's about two recent letters he signed that implored officials to ease the regulations designed for too-big-to-fail mega-banks on community banks and credit unions (joining a largely Republican set of legislators) and on regional banks (along with fellow Democrats).

The financial regulations rightly imposed after 2008, it is true, did not adequately distinguish between Goldman Sachs and your neighborhood credit union, which had little or nothing to do with the meltdown. This, in turn, has made it difficult for community-based finance to emerge as viable competition, which may have been the purpose of the Wall Street agents who had a hand in crafting the legislation. Fostering widespread, smaller-scale competition for Wall Street is a constructive counterpart to Sanders' call for breaking up the big banks into pieces; it also has the virtue of being highly bipartisan—it's something even Jeb Bush talked about back when he had a shot at the Republican nomination.

The problem, as The Intercept contends, is that deregulated smaller banks could become funnels for abusive practices, using financial instruments from Wall Street to inflict damage on their communities. It's probably true that this is what some bankers, and their politician friends, would like to do. But it's also true that credit unions and smaller banks are more accountable to their communities and their customers; their incentive is fundamentally less strong to screw people over. So, where do Kaine's sympathies lie?

These recent letters, so far, are being presented as almost the sole basis for Kaine's sympathy for banks, but he has a longer track record to consider. On the one hand, a regional bank he has vouched for in the Senate is Capital One, a controversial Northern Virginia-based outfit whose executives have contributed generously to his campaigns. On the other hand, he has been an ongoing supporter of democratic, member-owned credit unions, garnering an endorsement in 2012 from the Virginia Credit Union League.

"I have great respect for credit unions and their ‘people helping people’ philosophy," he said at the time. "Washington needs to ensure the nation’s ‘Main Street’ financial institutions can remain strong, innovative and vibrant for the good of working Americans and our communities." The Credit Union National Association, which represents U.S. credit unions, put out a press release to welcome the news of Kaine's new role.

Much has been said about the role of Kaine's Catholic faith in guiding his positions on abortion and capital punishment, as well as in inclining him to do missionary work in Honduras and learn Spanish. But what about his economic positions?

U.S. Catholic economic thought in recent decades has been mostly indistinguishable from U.S. economic thought in general. But that has not always been the case. Before World War II, many Catholics were strident supporters of distinctive, solidarity-based forms of economy, representing a kind of third way between robber-baron capitalism and authoritarian communism. Economist Msgr. John Ryan, whose ideas contributed to the development of the New Deal, was a proponent of credit unions and other forms of cooperative enterprise. The first credit union in the United States, in fact, was St. Mary's Bank, born out of a Catholic parish in New Hampshire.

I don't know how much this tradition of Catholic credit unionism has impacted Kaine, but I doubt the connection is entirely coincidental.

All this is to say that the very reasons frustrated progressives are attacking Kaine may be precisely the reasons they should consider supporting his bipartisan, highly plausible strategy of support for community-based alternatives to Wall Street. If Sanders had been successful in being elected president and breaking up the big banks—say, by re-instituting the Glass-Steagall Act that Bill Clinton dismantled—it would result in smaller financial institutions, like those Kaine's recent activities support. Of course, it's essential to ensure that community-based financial institutions are bound to regulations that prevent them from manipulation by Wall Street against the interests of their constituencies. But in order for such institutions to be viable at all, they can't be held to the kinds of intensive regulatory requirements that were designed for much larger and more dangerous institutions.

If we're going to create an economy that is truly democratic, and truly in service of human needs, we have to begin by distinguishing one kind of finance from another. There are real differences between a bank designed to extract money from customers to enrich its shareholders and a bank whose customers are its shareholders; a bank firmly grounded in a community will behave quite differently from one that reaches effortlessly across borders. Tim Kaine appears to recognize these distinctions, as does the Catholic tradition that formed him. His critics should too.

Show Comments (
4
)
Comments are automatically closed two weeks after an article's initial publication. See our comments policy for more.
William Rydberg
3 years 6 months ago
In my opinion, one could not have better described the position of the American Catholic "Vendu" Class. Never straying far enough from the federally funded "teat" that has compromised authentic Catholic teaching in America since the 1950's. One wonders if the author drives a BMW...;). It never hurts in American Politics to be a friend of big money, unlike Bernie Sanders... P.S. Maybe the author should remind Americans with Latino roots that Hillary's VP Nominee speaks Spanish fluently in the opinion of the New York Times... Unlike Bernie Sanders (who is not a Kaine Catholic).....Its important to note that Mr Senator Bernie Sanders IS NOT an atheist... Finally, after reading some of the DNC Wikileaks revelatory emails, one wonders about the timing of these positive articles. Some might say, that in their opinion they might be "crafted". Just my opinion...
Lisa Weber
3 years 6 months ago
If Hillary Clinton and the Democratic party can put together a reasonable platform that includes reform, they could possibly win over some of those enamored of the populist movement. The Tea Party and their adherents are so inarticulate and uninformed that making sense of the movement is difficult. It does make sense when seen as a protest against widespread corruption that has left many Americans poorer than they were. Banking and finance, the healthcare industry including Big Pharma, and the energy industry all have a significant degree of corruption that government has failed to address. If the Democrats can plausibly address the problem of corruption, they will be hard to beat for the decades that it will take to fix the problem.
JR Cosgrove
3 years 6 months ago
If one wants to learn about the banking system in American History a good source is a very dry but comprehensive book. It is titled "Fragile by Design." http://amzn.to/2a4yXP0 The US has had an incredible number of banking crisis since its inception 240 years ago. Canada to our north has had almost none. It also contains an interesting history of the founding of the country and why small farmers became the political backbone of the country long before its beginning because they all had guns and were the real protection for the colonies and then the states. These small farmers demanded local banks in order to suit the needs of their area but because of the arbitrary nature of weather on farming would often fail.
Chuck Kotlarz
3 years 6 months ago
Senator Elizabeth Warren notes “President Obama delivered. He signed into law the toughest Wall Street reforms and strongest consumer protections in generations.” The financial industry’s $284 billion in fines over the past eight years justify reforms and protections to help ensure financial law and order.
Advertisement