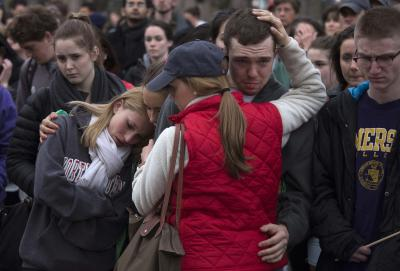 Daveed Gartenstein-Ross is a visiting research fellow at the International Centre for Counter-Terrorism—The Hague and a senior fellow at the Foundation for Defense of Democracies in Washington, D.C. He responded by e-mail to a few questions in the aftermath of the apprehension of the second suspect in the Boston Marathon boming, 19-year old Dzokhar Tsarnaev, on April 19. The other suspect in the attack, Dzokhar’s 26-year-old brother Tamerlan Tsarnaev, had died in a shootout with police in the early hours of the same day.

This attack, apparently intended to bring attention to the ongoing conflict in Chechnya, seems to have come out of left field. With all the focus on the Arab world and Al-Qaeda, have U.S. security experts paid too little attention to the various other threats in homegrown terrorism and from less prominent terror groups and networks?
It's too early to conclude that the attack was intended to bring attention to the conflict in Chechnya. The attackers could have a different radicalization trajectory and a different purpose. I think we will know more soon, but it's always perilous to have an overly static conception of what motivated an attack when there are still so many possibilities.

I wouldn't say that U.S. security experts have paid too little attention to the potential for "homegrown" terrorism. The potential for attacks from homegrown as opposed to international terrorists has been widely discussed, and the FBI's sting operations have largely focused on homegrown extremists. This case may ultimately point to aspects of transnational terrorism that security experts have overlooked and less prominent violent non-state actors may be one of them. But, again, we can't say that with any degree of certainty: while the time Tamerlan Tsarnaev spent in the Caucasus is known, it's not clear that he liaised extremist groups while there.

Is an open, democratic society able to defend itself against such individual actors?
Yes, but it cannot guarantee 100 percent security from terrorist attacks. That is why the emphasis some commentators placed on societal resiliency in the wake of the Boston attack was not misplaced (although much of what was said about resiliency was rather trite).

In addition, democratic society or not, it is inherently difficult to protect large public gatherings like the Boston Marathon—and even more difficult to do so at a cost that isn't prohibitive. Being able to conduct effective anti-terrorism policing without going broke is one of the big challenges we need to do a better job of addressing.

A good cautionary tale in this regard is the July 7, 2005 suicide bombings of the mass transit system in London. Two ofﬁcial British reports released in 2006 described that cell as autonomous and self-actuating rather than tied to al-Qaeda. But the idea that the London bombings were completely unrelated to al-Qaeda was deﬁnitively refuted by a commemorative video that the jihadist group released in July 2006. That video included not only praise for the attacks from bin Laden and Ayman al-Zawahiri, but also footage of a martyrdom tape recorded by that plot's ringleader, Mohammad Sidique Khan. Al-Qaeda's leadership simply could not have obtained this footage had the plot proceeded completely independently of them, as the official 2006 reports erroneously concluded.

Is it possible to become self-radicalized? How have the Internet and social networks contributed?
We shouldn't consider radicalization that occurs over the Internet to be "self radicalization": thinking of it that way will cause us to fundamentally misunderstand why the Internet can serve as such a powerful medium. Relationships formed over social media are real relationships; and an individual who radicalizes through social media without meeting any of his influencers is in no way radicalizing alone. In fact, some social science studies suggest that online bonds may form more quickly.

Several studies and reports have examined the effect of the Internet on radicalization patterns. Of particular note is the a 2012 report produced by the U.S. Senate's Homeland Security and Governmental Affairs Committee, which concluded that "the interactive online experience can accelerate the radicalization and mobilization process." It cites a couple of examples, including Umar Farouk Abdulmutallab (the would-be underpants bomber in December 2009) and Zachary Chesser, a young man who has pleaded guilty to attempting to provide material support to the jihadist group al-Shabaab.

Daveed Gartenstein-Ross is a visiting research fellow at the International Centre for Counter-Terrorism—The Hague and a senior fellow at the Foundation for Defense of Democracies in Washington, D.C. A specialist on violent non-state actors, and the al-Qaeda network in particular, Gartenstein-Ross is the author or volume editor of eleven books and monographs, includingBin Laden's Legacy(Wiley, 2011). He holds a J.D. from the New York University School of Law and an M.A. in world politics from The Catholic University of America, where he is currently a Ph.D. candidate in the same discipline.

Kevin Clarke
@clarkeatamericaclarke@americamagazine.org
Show Comments (
2
)
Comments are automatically closed two weeks after an article's initial publication. See our comments policy for more.
Christopher Rushlau
8 years 5 months ago
Use of the term "terror" as Kevin Clarke does here is a badge of racism and I will not read further. It arbitrarily divides the population into "we" who are allowed to use strategic force and "they" who are not--the criteria for the distinction never being spelled out.
David Smith
8 years 5 months ago

eing able to conduct effective anti-terrorism policing without going broke is one of the big challenges we need to do a better job of addressing.

That seems to be a problem with this representative democracy at this moment. There's a popular idea that everything possible should be done to fix every problem, no matter how much time and money and other resources are necessary to do it. A headline-news mentality sees every problem as more important than every other problem, and the resources of the government as unlimited. Another issue here - and one I'm a little surprised to not see discussed in this very brief interview - is freedom. How much freedom is it responsible for a country dedicated to the idea that individual freedom is always paramount to do away with, and for how long, when an emergency has been declared? We're hearing very little from officials about their responsibility to avoid protecting the populace by putting them, effectively, in prison. A curfew, remember, is effectively imprisoning the entire population of a large area in their own houses. That may be necessary, in very unusual and very specific and narrowly defined situations, but it must never become routine. Nor must unlimited surveillance. Security people have become accustomed lately, it seems to me, to believing that they should be given free rein wherever they feel they need that, and it also seems that government officials are loathe to oppose them, perhaps for fear of seeming to soft on criminals. That's simply bad. In democracies, soldiers and police need always to be under close civilian control. There's a price in that, of course: you don't get the one-hundred-percent-protection against crime that you do in a dictatorship.