In Synod Working Document, A Realistic Picture of the Family Today 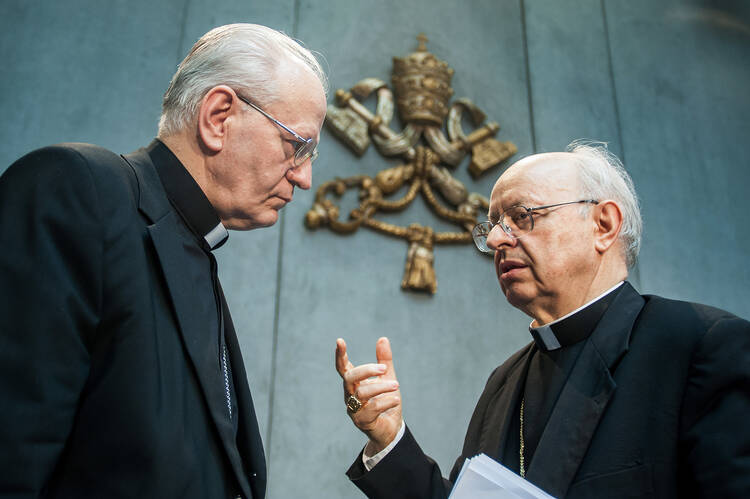 The Working Document (WD) for next October’s Extraordinary Synod of Bishops on the Family provides a clear picture of the real situation of families today.  Based on input from the consultation in dioceses across the world, it offers a good basis for an open and lively discussion at that synod.

It not only reveals that the crisis in the family is profound, complex and global, but also that the Catholic Church itself is in deep difficulty, not to say crisis, as it realizes that much of its teaching is neither understood nor accepted, and that it currently lacks an adequate pastoral response in this whole field.

The 75 page document summarizes the responses received from over 85% of the world’s 114 Catholic Bishops Conferences, as well as from the Oriental Churches, the Roman Curia and the 800  responses from associations, communities or individuals,  the Italian Cardinal Lorenzo Baldisseri, General Secretary of the Synod of Bishops, told a press conference in the Vatican, June 26.

Baldisseri was one of a seven-person panel presenting the text. Other participants included Cardinal Peter Erdò (Hungary) and Archbishop Bruno Forte (Italy), General Relator and Special Secretary respectively to the October synod.  The panel’s presentation took 90 minutes, which left only 30 minutes for questions from the many reporters present.

The WD pinpoints sharply the various dimensions of the crisis both in the family and in the Church’s current pastoral approach to the many challenges that have emerged here.

Reading it one realizes how much the world and the situation of the family has changed since John Paul II published “Familiaris Consortio”  (The Christian Family in the modern world), 22 November 1981, after the 1980 synod on the family.  Same-sex unions and the impact of the new information technology, for example, were not factors then, nor had cohabitation, ‘de facto unions’ or divorce reached anything like the proportions they have today. Moreover, the sexual abuse of minors’ scandal was not known then, and immigration had not yet reached present day dimensions.

Reading this summary of the consultation’s findings one can also see the wisdom and far-sightedness of Pope Francis in deciding to open a synod process on the whole question of the family.  His own pastoral experience in Buenos Aires has enabled him to perceive clearly that this is not a subject that can be resolved in one synod, it requires time and reflection, input from many quarters and an openness to the Holy Spirit such as happened at the Second Vatican Council.

The WD text is divided into three parts. Part I- “Communicating the Gospel of the Family in today’s world”,  summarizes the teaching from the Bible and Church documents on the family, the knowledge and acceptance of this teaching, the natural law, the vocation of the person in Christ.

Part III – “An openness to Life and Parental Responsibility in Upbringing”, returns to the question of the question of Church teaching, especially  Paul VI’s  Humanae Vitae (1968) which, it says, “had a prophetic character in reiterating the unbreakable link between conjugal love and the transmission of life”.

The consultation, summarized in the WD, confirms that this teaching is not widely understood and not generally accepted.  That issue had been raised at the 1980 synod but was sidelined then.  This time it has to be seriously discussed. At the press conference,  Archbishop Forte described the Church’s presentation of Humane Vitae as “a communications failure”.

A reading of the WD suggests that something similar could be said about the use of “the concept of natural law”. The text reports that  this concept is surrounded by “large scale perplexity”, and  “a vast majority of responses and observations” from the worldwide consultation reveal that “the concept of natural law turns out to be, in different cultural contexts, highly problematic, if not completely incomprehensible. The expression is understood in a variety of ways, or simply not understood at all.”

Cardinal Erdò said the consultation had revealed that the Biblical teaching about marriage and the family “is widely known and grasped by the People of God” but the same cannot be said of the Church’s documents.

Referring to the presentation of the Church’s teaching on marriage and the family, the Italian archbishop-theologian, Bruno Forte, told the press, “We’ve been using language people no longer understand, or answering questions they are not asking”.

Moving on from the question of biblical and Church teaching, Part II of the WD examines the various pastoral proposals underway and the crisis of faith in the family. It looks in particular at the critical situations “within the family”, including ‘break-up and breakdown’, violence and abuse.

It highlights this violence and abuse and says the responses from the consultation “unanimously make reference to psychological, physical and sexual violence and abuse in families which has a particularly damaging effect on women and children”. Such violence and abuse “is neither occasional nor isolated”, it states.  It also draws attention to “the appalling phenomenon of the killing of women”, as well as “sexual promiscuity and incest in the family”, pedophilia and child abuse, trafficking and exploitation of children, together with ‘sexual tourism’.

The WD says responses from the consultation “constantly allude” to various addictions – old ones like alcohol, drugs, gambling, pornography but also new ones linked to video games and the internet. “Television, smart phones and the Internet can be a real impediment to dialogue among family members”, it says, and  in the end “the means of communication and access to the Internet replace real family relationships with virtual ones”

Turning to “external pressures” on the family, the WD names many: those resulting from work, migration, poverty, consumerism,  wars, and inter-religious marriages.

Significantly, it says that reports “from almost every part of the world” frequently refer to the sexual scandals within the Church and pedophilia in particular. It charges that these scandals “significantly weaken the Church’s moral credibility”, as does “a conspicuously lavish lifestyle by some of the clergy”.

Ten of the 75 pages in the WD are given to the “situations in families” that range from cohabitation – “on the increase”, to de-facto unions,  and divorce – “a very high number of people are divorced or separated” in Europe and America,  but less so in Africa and Asia.  It notes however that the problem of divorce is becoming “less important” because more people are living together and not marrying.

The consultation and WD highlights the plight of  single mothers, including “teen mothers”, who have no husbands or partners and struggle courageously to bring up children.  It emphasizes that the Church must give them special attention.

The synod WD  devotes five pages to “the situations of canonical irregularity”, and the vexed question of the reception of the sacraments prohibited to those who divorce and remarry. Here it recalls that Pope Francis said, “Clearly, in these cases, the Church must not assume an attitude of a judge that condemns, but that of a mother who always received her children and nurses their wounds so they may heal”  . The WD notes that many pastoral proposals had emerged in the consultation regarding ways of approaching these “irregular” situations, including a better annulment process. It simply puts these various proposals on the table for future reference and discussion.

The WD speaks about the same-sex unions in non-judgmental five-pages.  It reports that while “every bishop’s conference” opposes “redefining” marriage between a man and woman through the introduction of legislation permitting a union between people of the same sex,  at the same time they “are trying to find a balance between the Church’s teaching on the family and a respectful, non-judgmental attitude towards people living in such unions”.

The WD adds that “extreme reactions to these unions, whether compromising or uncompromising, do not seem to have facilitated the development of an effective pastoral program which is consistent with the Magisterium and compassionate towards the persons concerned.”

Here and elsewhere the WD offers some pastoral guidelines, and insists on responding positively to children in such unions in regard to the administration of the sacraments.  Indeed the WD here and elsewhere gives considerable attention to children and how the Church should show particular pastoral care for them, irrespective of the situation of their parents.

On the flight back from Rio last summer, Pope Francis Pope emphasized that this is the “kairos” – the God given moment – for mercy in the Church. In the WD, one sees that this idea is strongly present in the search for pastoral ways of showing the mercy of God to people in difficult or irregular situations, looking for ways to heal wounded people, and showing them that God loves them.

“There is a presentation of requests in the document”, Cardinal Baldisseri said at the press conference, making clear the October 2014 synod’s task is to go into great depth in the analysis of the present situation of families and come up with proposals, not solutions.  The solutions are for the 2015 synod, which will have many more bishops as participants.

“The WD gives a panoramic view, a description of life as lived, not just of suffering, but also suggestions to resolve problems”, he added.  This will be reflected on and discussed at the October 2014 and 2015 synods.  The results of the 2014 synod will provide the basis for the Working Document of the 2015 synod, he said.

Archbishop Forte emphasized the importance of the  discussion and reflection that will take place in the local Churches between the two synods. He recalled that major developments took place between the sessions of the Second Vatican Council, and he thinks the same can happen in this synodal process if bishops, priests and lay people remain open to the Holy Spirit.