Synod Must Be About More Than Just the Hot Button Issues 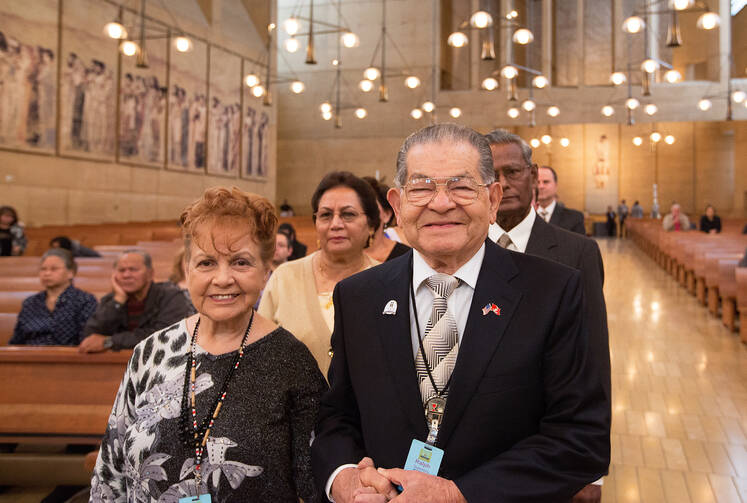 As the Vatican prepares for the Synod of Bishops on the Family, Oct. 4 to 25, various individuals and groups are offering input on issues they want the synod to address. I asked several U.S. Catholic pastors and other experts to note issues on which people go to clergy for help.

Most emphasized family relationships more than the theological questions that certainly underlie the issues. The need for permanence in marriage stands out, for example.

Priests report that when marriages seem to be unraveling, individuals head for a priest, though now, more often, to a marriage counselor, to save the union they entered into in the warm glow of love. Surely the church has a role to play in prevention of the dissolution of marriages, perhaps through programs like Marriage Encounter that strengthen marriages and keep them alive. This may be easier than putting marriages back together. The church has programs for that as well, however. Think Retrouvaille, a sort of Catholic marriage repair shop.

A Virginia woman with long experience in studying marriage issues in the church notes that people don't expect their pastors to be counselors, but they do expect that pastors will know how to refer them to appropriate counseling and resources. A big problem can be when couples in trouble turn to their priest, but he neither knows how to counsel them nor can recommend marriage-friendly counselors.

A Minnesota priest wrote that his experience, sadly, is that people don't approach priests as much as they used to. One of the biggest surprises to him in the last five to ten years is the decreasing number of couples who are getting married in the church. Does the church need an outreach program to emphasize the value of a church marriage?

When couples do seek marriage in the church, the Minnesota priest said there can be the challenge of one of the couple being married already and not seeing the need for an annulment.  His diocese (and many others) has a very strict approach to annulments, he said, and applications are few and far between. The issue of annulments needs to be addressed. The church has invested numerous resources in development of the annulment process and training of canon lawyers to work on annulments. Surely realistic and up-to-date use of annulments must be a part of the Synod. A bit of current data on annulments: Only about 15 percent of divorced Catholics apply for an annulment. About 50 percent of annulment petitions are granted. Plainly we need to do a better job of explaining and simplifying the annulment process.

All the priests cited communications issues, both in communication of what theological jargon means and how individuals in intimate relationships need to communicate with one another. A saying by church wags is that more people have been excommunicated by Aunt Minnie than by the church. For the record: A Catholic who is civilly divorced and remarried is not excommunicated. See http://www.foryourmarriage.org/is-a-divorced-person-excommunicated/.  In their pastoral letter on marriage the U.S. bishops wrote: "Although the Church cannot recognize such subsequent unions as valid marriages, she hopes that people in this situation will participate in parish life and attend the Sunday Eucharist, even without receiving the Sacrament."

A Long Island priest said a frequent complaint is “My spouse doesn’t communicate.” I recall a story of a young woman who was concerned about her new spouse’s worries over finances. She thought he meant having enough money to get through the week. He meant which investment portfolio to pursue for a solid retirement plan. Help with communication got them over that hurdle. Understanding finances can be a vital part of marriage preparation.

Other concerns of older people, the Long Island priest said, include that their children do not go to church nor have their children baptized, as well as their children’s marriages ending in divorce. “Mostly the people want a friendly shoulder to cry on,” he said. “They don’t expect solutions.” The church, however, while offering the pastoral solution of a crying towel, also must invest in resources to prevent and address such pain. Perhaps this is something that remote and immediate marriage preparation classes can address. Marriage preparation issues can make for interesting and good homilies as well as parish education programs whenever young adults can be brought together.

A Brooklyn priest suggests the church has more opportunities when it comes to reaching Hispanic communities. “In Hispanic parishes people will approach the priest more frequently on a wide number of issues (marital infidelity, teens on drugs or in gangs, jobs, immigration, exorcism, blessing of homes, illness, money) because the priest is seen as the best and last hope, the only resource they really have because they can’t approach government agencies because of language and immigration issues.” Plans for Hispanic outreach in the United States might want to concentrate on marriage preparation, where the soil is especially ripe.

The synod will be only a month long but there is more than a month’s worth of issues for it to address. The hot button issues such as gay marriage and reception of Communion by people who are divorced and remarried without an annulment are vital and will grab headlines but there are many more issues with far-reaching consequences to address. They include realistic marriage preparation programs, support for young couples in the early years of marriage and programs on how older couples with can help younger ones face problems that can seem frightening in the early years of a marriage.

The XIV Ordinary General Assembly of the Synod of Bishops considers the theme, “The Vocation and Mission of the Family for the Church and Contemporary World.”

Mary Ann Walsh
Show Comments (
2
)
Comments are automatically closed two weeks after an article's initial publication. See our comments policy for more.
John Barbieri
7 years 11 months ago
This article points out another sad situation for the church. So many of its clergy simply don't have the training to be able to offer effective council. If they don't have appropriate training, they ought to remember Hippocrates dictum; "First, do no harm." They need to know and should know to whom couples ought to be referred. There is no substitute for competence.
ed gleason
7 years 11 months ago
The Church, both laity and priests allowed too many marriage ministries to wither away. CFM, Marriage Encounter, Engaged Encounter and Retrouvaille are and were not given diocesan/parish support. My take was that lay movements were suspect and allowed to atrophy because they could not be rigidly controlled;, this, along with the shortage of clerical support. Some movements struggle on with the help of retired priests. The newbie ordained cannot ever be expected to help as most believe laity are wide receivers only and are never to be quarterbacks in the Church game. Want to Chalk up another reason for a married priesthood? : it will help these lay movements survive.