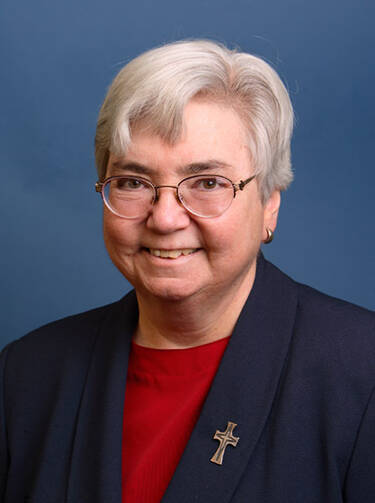 New York, N.Y. (July 11, 2014) – Father Matt Malone, S.J., editor in chief of America, announced today the appointment of Sr. Mary Ann Walsh, R.S.M., as U.S. Church Correspondent. Sister Walsh is the current Director of Media Relations for the U.S. Conference of Catholic Bishops and will step down from that post this summer. In her new role, Sister Walsh will be responsible for planning and producing America’s coverage of the U.S. Church. In addition to feature writing, Sr. Walsh will make contributions to America’s blogs and other digital platforms and will write a column on the U.S. Church for the print edition.

Sr. Walsh’s appointment is the latest development in the most dramatic expansion of America’s domestic and international coverage in 30 years.“We are delighted to welcome Sr. Mary Ann to America,” said Father Malone. “Her unique experience and unparalleled knowledge of the U.S. Church will be a great boon for our growing readership. And her appointment is a significant ‘first’ in another way: Sister Mary Ann will be the first religious sister to serve on America’s editorial staff in our long, storied history.”

Sister Mary Ann Walsh, R.S.M., is a member of the Sisters of Mercy of the Americas, Northeast Community. She holds a master’s degree in English from the College of St. Rose and a master’s degree in pastoral counseling from Loyola College of Maryland. She served as a correspondent for Catholic News Service in Rome and Washington and as director of communications for World Youth Day in Denver in 1993. She then began her work in media relations for the U.S. bishops. She is an award-winning writer and has been published in The Washington Post, USA Today and Editor & Publisher, among others, and is the editor of three books: Pope John Paul II: A Light for the World; From John Paul II to Benedict XVI: An Inside Look at the End of an Era…; and Benedict XVI: Essays and Reflections on His Papacy.

America is the leading national Catholic weekly magazine, a smart Catholic take on religion, politics and culture. Founded in 1909 by the Jesuit order and directed today by Jesuits and lay colleagues, America is a resource for spiritual renewal and social analysis guided by the spirit of charity.

The Editors
Show Comments (
5
)
Comments are automatically closed two weeks after an article's initial publication. See our comments policy for more.
PATRICE TUOHY
7 years 10 months ago
What a coup for America! Congratulations! Be prepared, America editors, you will learn a ton from this powerhouse communicator. I know I have. Best wishes, Sister Mary Ann.
Vince Killoran
7 years 10 months ago
I don't mean to be unkind and Sr. Walsh is an accomplished person but I do wonder why AMERICA has brought two new staff members recently who come from the ranks of officialdom (Helen Alvare is the other). I look to this magazine to read thoughtful debates and articles from a wide range of Catholic perspectives. Is AMERICA becoming an arm of the USCCB?
Jeanne Linconnue
7 years 10 months ago
These two women are very disappointing choices - neither hold views that are representative of the large majority of Catholic women. Both do seem to be simply mouthpieces for the views of the bishops. As a woman, I was hopeful when America announced that it was going to add women to the editorial and writing staff, assuming that the silenced and voiceless female majority in the church might finally have at least a small voice in the world of Catholic publications. It was a vain hope, since these two women are not representative of the full range of views of Catholic women, but only of the relatively small group who agree with the bishops on gender issues and modern birth control methods. It seems they have been chosen simply because they are women who are "safe" - they are in accord with the male celibate hierarchy who run the church and won't say anything that rocks the boat. I find less and less of interest in America. It is predictably in line with the bishops - "liberal" on political issues such as immigration and economic issues, and "orthodox" on church matters, especially those related to women and gay issues. Why bother reading it? I skip it more and more. It has become so conforming to the bishops' agenda that one might as well skip America and simply read the USCCB website. I miss the days when Fr. Reese was editor. He would often invite authors with differing understandings and viewpoints to write articles on the same subject and present them side by side. It was wonderful to read the "best" of both. However, I guess he did that once too often when he invited a "progressive" theologian to write on the same subject as Cardinal Ratzinger and published the articles in the same issue. Once Cdl. Ratzinger became pope, Reese was forced to step down. The magazine has gone downhill ever since Reese left, especially in the last year or so when it has become so predictable. It is sad, because it was once a vibrant and challenging publication that featured the best thinkers in the church. As Drew Christiansen noted at the time Reese was forced out - "Father Christiansen said May 6, "Father Reese greatly improved the magazine...., "By inviting articles that covered different sides of disputed issues, Father Reese helped make America a forum for intelligent discussion of questions facing the church and the country today." The church needs more "intelligent discussions" that present "different sides of disputed issues". However, "intelligent discussions" and different viewpoints are no longer welcome in the church it seems, not even in America.
Joshua DeCuir
7 years 10 months ago
I couldn't disagree more. America is becoming the epitome of what a Catholic magazine should be: issues are explored without easy resort to the reductive categories of "orthodox" or "liberal", "left" or "right". It is a place where real encounter & dialogue is increasingly occurring! Kudos to the editors! Keep up the good work!
Tim O'Leary
7 years 10 months ago
Some comments below reveal a rarely spoken truth of some religious agitators on the left. They say they want women in positions of authority, but they really mean that they want dissident women. Faithful women need not apply. It reminds me of a line re the NYT - in their view, the only good Catholic is a bad Catholic. This tactic comes from the political sphere, where so many pro-life women are reviled (and even ridiculed) even more than pro-life men, small government blacks are called uncle Toms, and non-union blue-collar workers are called scabs. As to statistical representation, it is well known that, outside the rarefied world of academia, women are more devout than men, more pro-life than men, more anti-divorce than men, and more conservative on family values than men. I haven't seen figures, but I bet that more men even favor contraception than women.