On Speaking Out as a Jesuit 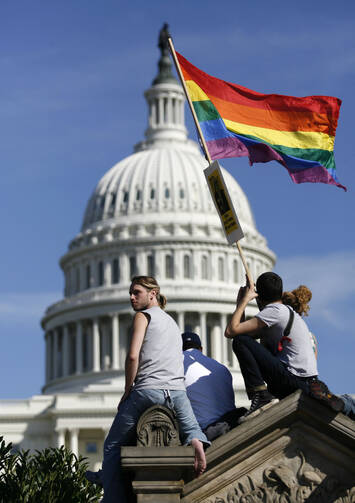 I’m so proud of my brother Jesuit, Damian Torres-Botello, SJ, for speaking out on an important issue in our church: the welcome of LGBT men and women. I’m also proud of him for openly admitting that he himself is gay. While such an admission is commonplace in some circles, Damian’s public statement—in this case online—is rare. Why? Not because of any aversion to honesty in the religious orders and the priesthood. Many priests and members of religious orders who are gay (and celibate) are honest about this part of their lives with friends and family. Rather, the vast majority of religious superiors and bishops will not allow seminarians, scholastics or priests to publicly declare that they are gay.

So there is another reason to take note of this article: Damian’s religious superiors explicitly approved his publishing it. Most crucially, his provincial superior approved his openly discussing his homosexuality.

A little background: Jesuits, like members of other religious orders, take vows of poverty, chastity and obedience. For most Jesuits, obedience is often the easiest of the vows: basically, carry out the job to which you have been missioned. But in some cases obedience is brought to bear on more sensitive topics. And over the last few decades no Jesuit, as far as I know, has been permitted by his superiors to “self-identify” as gay in a public way.

The reasons are not hard to understand. Provincials may fear that the Jesuit will be less “available” for different ministerial assignments (say, in countries where homophobia is a stronger barrier to acceptance among Catholics). Provincials may feel that a Jesuit will be unfairly identified mainly as a gay man, rather than as a Jesuit. That is, there is a perceived danger that some people will conclude that the man’s identity centers on his homosexuality, rather than in membership in the Society of Jesus. Finally, provincials may fear that the man might be the subject of hatred and contempt.

Provincials in general want to protect the men in their care, as well as to ensure that they are “missionable.” Thus, there has been--until now—universal reluctance to grant permission to men who have asked for permission to “self-identify.” And in such sensitive matters, Jesuits must seek such permission. Again, this is part of our vow of obedience. Indeed, everything a Jesuit publishes (whether in articles or books), especially on sensitive or controversial matters, must be approved by superiors. This is even more the case with a Jesuit in training, or “formation,” as Damian is.

So the decision of Damian’s superiors to grant him permission is notable. It is the first time that I can think of that a Jesuit has been permitted to do write about being gay. So I’m proud of two things today: Damian’s courage and honesty, and that of his superiors.

James Martin, S.J.
@jamesmartinsj
Show Comments (
4
)
Comments are automatically closed two weeks after an article's initial publication. See our comments policy for more.
Clemens Suen
6 years 6 months ago
The fact that Damian's open admission of his sexual orientation is not incompatible with the Church's teachings about homosexuality, because the Church does admit that gay or lesbians are genetically caused. It is the "love the sinner but hate the sin" cliche that is controversial in the minds of many thinking Catholics. If DNC is part of nature, why homosexual behavior is "intrinsically disordered"?
ed gleason
6 years 6 months ago
Thanks;;A good move for Damian, the Jesuits, the Catholic Church, these steps into the future are necessarily difficult and need courage,
Krishna Bains
6 years 6 months ago
There is absolutely no basis for a "gay" gene. It doesn'T exist. The human genome has no such gene. Curren thinking suggest this develops during gestation.
Terrance Wagner
6 years 6 months ago
I always wake up each day knowing that I have received many blessings and love from God. Today that love was reaffirmed. The message from Damian with his superiors approval was so over whelming. It brought me to tears of happiness and joy. I am 73 year old gay Catholic male. Attraction (non-sexual) to other males began at the age of 5. What does 5 year understand at that age. I remember around the age of 10 one of my uncles made a remark about me comparing me to a transgender person of that time. I left the house and went across the street to my St. Peter's church. I sat in the pew and cried. I was a boy. I did not want to be a girl. I can remember Jesus coming down from the altar and sitting in the pew next to me. Putting his arms around me telling me that I am okay,and that He loves me and always will be there for me. Some would say this was a figment of my imagination. I cannot prove it, but I do know that He and his Mother Mary have been at my side all of these years. As I became older I had many struggles with my life. I got married had two beautiful daughters. Sometimes it was very difficult. Ten years later came out to my wife and family. Most accepted me. Nothing was discussed and. life just went on. After going to Lourdes for the "cure" I finally accepted myself. According to my wife, The Blessed Mother loves you just as you are. I am now in a 33 year relationship, still a Cahtolic active in my parish.I have to hope that someday I will be accepted by all in my church.