Social Justice Ministry in Chicago: From Bernardin to George to Cupich 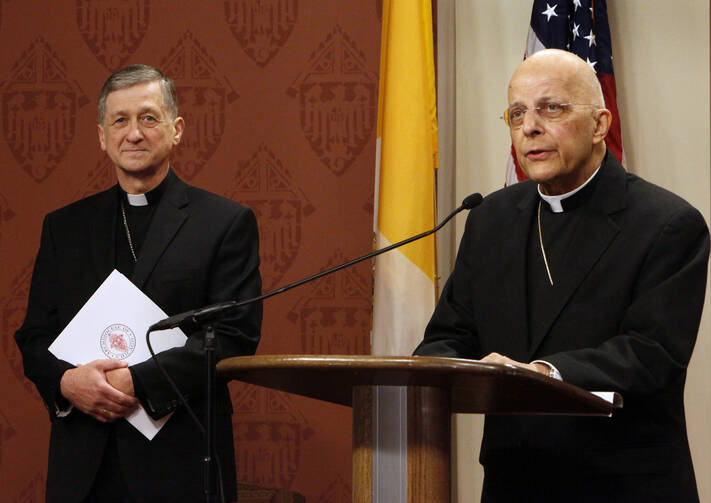 Many iPhones lit up the night Bishop Blase Cupich of Spokane was announced as the replacement for my former boss, Cardinal Francis George, O.M.I. The appointment of Bishop Cupich as the new ordinary for the Archdiocese of Chicago has been presented by many in the media as a discontinuance of “George the Corrector.” It did not take long even for the infrequent follower of religious politics to weigh in about the differences between Cupich and George. While there are differences, many may be surprised by the deeper, abiding continuity from George to Cupich connected to the Chicago archdiocese’s legacy of social engagement.

As the third largest archdiocese in the country, the Catholic Church in Chicagoland has been a major player in social reform in the United States for decades. This was no different under George’s leadership. As his former director of the Office for Peace and Justice for seven years, I believe one of George’s most notable legacies will be his consistent promotion and support of the Catholic social tradition. While his predecessor, Joseph Cardinal Bernardin, was portrayed as a peacebuilder, Cardinal George would forge his own way on questions of social injustice, guided by his missionary charism. George stands as a bridge to the socially conscious Cupich, with his empirical development of social justice infrastructure, just as Pope Emeritus Benedict was a continuum of the Catholic social doctrine between Saint John Paul II and Pope Francis with social encyclicals such as “Caritas in Veritate.” Their personal styles may have differed, but more surprising is the continuity of social doctrine pastorally applied.

I was in college during the halcyon days of the economics and peace pastorals of the U.S. bishops. I took social ministry positions in the Archdiocese of Washington and then the Campaign for Human Development (before the Catholic was added, CCHD) at the U.S. Catholic Conference. Cardinal Bernardin and the Archdiocese of Chicago provided a model for engagement in social action that was well deserved. The image is ingrained in my mind of a cancer-ridden Joseph Bernardin rising from his wheelchair to give an impassioned plea for human dignity and solidarity at the 25th anniversary of Catholic Campaign for Human Development in downtown Chicago.

Taking over the Office for Peace and Justice in Chicago a year and a half after Cardinal George arrived was a gamble worth taking. Under his stewardship, the Chicago justice legacy of social engagement continued to develop. The cardinal led the Illinois bishops in releasing “Moving Beyond Racism” in April 2000. With the decision by the federal government to tear down the notorious public housing projects in Chicago, George provided the vision to create a “Welcoming Our Neighbor” program for parishes to adopt the displaced families. Probably one of the most powerful elements of the cardinal’s legacy will be his own racism pastoral, “Dwell in My Love.” It addressed systemic racism in deep, comprehensive ways, including significant attention given to the issue of white privilege. No other Catholic ordinary had gone this far before. He also created an Office for Racial Justice, and developed a comprehensive pastoral plan to dismantle racism within the Chicago region. Many of Pope Francis’ pleas for mercy, one could argue, are foreshadowed in “Dwell in My Love.”

In 2009, Cardinal George created the Office for Immigrant Affairs and Immigration Education to implement the goals of the Catholic Campaign for Immigration Reform of the USCCB. The major launch of this effort took place in the summer of 2005, and grew with the empowerment of priests, sisters, brothers, parish leaders and immigrants. The cardinal also overhauled and strengthened the Parish Sharing program, which was created in the 1970’s to build bridges between parish communities separated by race, ethnicity and culture. This program annually provides $3.5 million dollars in cash and $3.5 million in services to strengthen inner city parishes.

Community organizing was birthed in Chicago, and Cardinal George fueled its growth through his support of the Catholic Campaign for Human Development. CCHD exists as the U.S. Bishops official antipoverty program and was created by the vision of Chicago leaders like Bishop Dempsey, Msgr. Jack Egan, and a young priest at the U.S. Bishops conference, Joseph Bernardin. CCHD is the largest faith-based support for community organizing in this country. The Archdiocese of Chicago grew to consistently become one of the largest financial stewards of CCHD under Cardinal George raising as much as $800,000 during the annual collection in November.  Cupich easily can build on this legacy of community organizing growth and comprehensive immigration reform.

The purpose for laying out this Chicago continuum is not an apologetic for Cardinal George’s time as leader of the archdiocese. But there are important connections between Bernardin and George, and now Cupich, that have been overlooked. Three bishops in a row came from elsewhere as missionaries and found home in Chicago, where the church’s engagement inspires. Cardinal George’s most positive legacy will be his prophetic work in social ministry, just as it was for Cardinal Bernardin, and hopefully it will be for the future archbishop, too.

Bill Purcell is the associate director for Catholic Social Tradition at the Center for Social Concerns at the University of Notre Dame and the former director of the Office for Peace and Justice of the Archdiocese of Chicago.