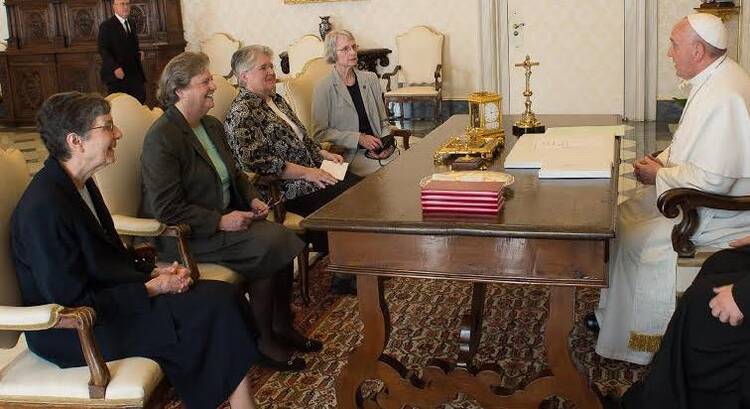 The Vatican’s “mandate,” in which it oversaw the running of the Leadership Conference of Women Religious, has ended—two years earlier than anticipated.  In a joint statement today from the Congregation for the Doctrine of the Faith and the LCWR, both parties said that the goal of the oversight had been “accomplished.”

When the Vatican’s investigation of the LCWR, the umbrella organization that represents the majority of women’s religious orders in this country, was announced in 2012, some of the language coming from Vatican officials was harsh.  As a result, there were widespread concerns that the following outcomes were possible: the outright elimination of the LCWR; a virtual gutting of the organization, rendering it a shell of what it had been; and a longer-term Vatican oversight, perhaps extending for many years.  Those fears have proven unfounded.  The main terms of the joint agreement state that the LCWR will be more attentive that its official publications are in “accord with church teaching” and that any speakers at its annual conventions are “appropriate to the Conference’s mission.”  The LCWR will continue, and will surely continue to be a powerful voice in the Catholic church in this country.

The two groups have come to a mutual understanding, and, as the document say, their dialogue “has borne much fruit, for which we give thanks to God and the gentle guidance of the Holy Spirit.”  Archbishop J. Peter Sartain, the American bishop charged with the temporary oversight of the LCWR, called the conversations a "blessing from the Lord."  And today, as the joint statement was being released, several members of the LCWR leadership met with Pope Francis, and afterwards said in a statement that they were “deeply heartened” by the Pope’s “expression of appreciation for the witness given by Catholic sisters through our lives and ministry and will bring that message back to our members.”

Now that the investigation has concluded, what can we say?

First, the LCWR entered into this dialogue prayerfully and faithfully, but also conscious of their unique role in the church.  In the best tradition of religious men and women, they were both obedient to church authority and to the promptings of the Holy Spirit.  This is a delicate balance for religious: the need to be faithful both to the institutional church and true to the unique role of religious life, as well to the individual charisms of their orders.

Second, the surprisingly early ending of the investigation, and the amicable agreement, may be a sign of the more merciful approach in all areas under Pope Francis.  Last December, the “Apostolic Visitation” of the “quality of life” of all American women religious (that is, Catholic sisters) also ended amicably, with unexpectedly fulsome praise for women religious from the Vatican congregation that deals with religious orders.  Indeed, as almost all of the Pope's biographers have noted, the former Jorge Mario Bergoglio, SJ, had several run-ins with Jesuit superiors after he served as Jesuit provincial in Argentina.  Though it is unclear to what extent the Pope was involved in these deliberations, his experience may have give Pope Francis greater sympathy for religious men and women under “investigation.”

Third, dialogue works.  The process has involved extensive, and honest, exchanges of perspectives on matters involving faith and its practice, the roles of church leadership and religious life, hopes for the life of the Catholic church, and so on. As the Pope pointed out in the Synod on the Family, when these exchanges are carried on in a spirit of mutual respect, deeper understandings of differing perspectives can better be heard and appreciated. Both sides seemed to have genuinely heard the concerns of the other and tried to understand the context of those concerns. As Sharon Holland, IHM, the president of the LCWR, commented about the Apostolic Visitation, the commonalities between the sisters and the Vatican were much greater than any of their differences.

Fourth, the stakes were high. Both sides were concerned with the life of the church and the People of God.  The CDF’s investigation in particular had ramifications beyond just the LCWR and the state of religious life, since it dealt with matters of conscience, faith, belief, which impact, in different ways, everyone in the church.  The commitment to dialogue, especially on matters like this, is difficult and time-consuming, but it is probably one of the most important works we can engage in at a time when the whole world is struggling with polarization and differences, and when the church is trying to move beyond internal division.

Fifth, this investigation might have been just as easily, and perhaps better, handled on the local level.  Essentially, many of the concerns about the LCWR originated with questions about their choice of speakers at their annual conventions.  And frankly, to my mind, while the vast majority of the speakers were outstanding, a few of the topics were questionable. On the other hand, is it fair to ascribe to the LCWR the views of all of the speakers at a convention?  (To use another example: Is the archbishop of Los Angeles responsible for everything that every speaker says at the Los Angeles Religious Education Congress?) Still, that a complaint about annual conferences needed to be taken up by the Vatican seemed hard to understand. It might have been easier, and less work for everyone involved, had the U.S. Conference of Catholic Bishops, or a delegate, simply asked the LCWR for answers to some questions.  Here an application of the Catholic principle of “subsidiarity” could have helped.

Sixth, the Apostolic Visitation and CDF investigation of the LCWR, which were announced around the same time, were needlessly painful for thousands of American sisters.  One elderly sister told me sadly, after learning of both of the investigations, and hearing the condemnatory language from various church leaders, “Why don’t they just let us die?”  It was a painful period for many of my women religious friends, and for their friends.  Much of this could have been avoided by avoiding hurtful language about sisters overall.

Seventh, and most happily, the two investigations provoked an outpouring of gratitude for women religious in this country.  And, in the end, both the Apostolic Vistitation and the CDF’s investigation of the LCWR ended with expressions of gratitude from the Vatican.  This is appropriate. For no one has done more for the church for so little.  Perhaps it was fitting that, after three years of sadness, dialogue and investigation, the final image of the Apostolic Visitation and the CDF’s investigation was a photo of Pope Francis smiling with the leadership team of the LCWR.  It seemed to say what many have long wanted to say to these amazing women:

James Martin, S.J.
@jamesmartinsj
Show Comments (
5
)
Comments are automatically closed two weeks after an article's initial publication. See our comments policy for more.
Prateep Ghose
7 years 3 months ago
Well said, Father Martin. We owe a considerable debt of gratitude to our Sisters, who have done so much for our faith and who have inspired us through countless acts of mercy and sacrifice.
Stephanie Barrett
7 years 3 months ago
I am so very pleased that this long drawn out question mark, regarding our sisters has been put to bed. As a child who was taught by sisters, had relatives who were Urslines, I felt the pain of all woman religious as a woman and friend of many. Some may say not far enough. My thoughts are this Church was created by Jesus Christ, and He never directed that we have woman priests. Let us love one another and move forward in joy that this stain on the reputations of many has been removed.
Robert Killoren
7 years 3 months ago
I doubt this will silence the critics, but at least now no one in power will do anything about the complaints of the reactionaries.
Tim O'Leary
7 years 3 months ago
It is indeed a great thing when controversies can be resolved and deficiencies reformed in such a amicable way, and the agreement certainly seems to ensure that the Catholic faith will not be diluted and evangelization will be strengthened. The quick resolution is also evidence of the persuasive power of Pope Francis and his charismatic genius. Very sad quote from the elderly sister who said, “Why don’t they just let us die?” She was no doubt referring to her old age and end of a life of service as she prepares to meet her Maker, but it does have an ironic second meaning - referring to the likely death of many of the religious orders that make up the LCWR, unless something dramatic happens to vocations.
alan macdonald
7 years 3 months ago
Father Martin, ever supportive of socialists and homosexualists makes it seem like there was no need for a CDF intervention. That the nuns supporting abortion, homosexuality and female ordination were merely sowing wild oats. That having Barbara Marx Hubbard as their main speaker at several conventions was merely a quest for truth. These nuns will soon be gone and so will their kooky views. Read what Father John Zuhlsdorf says about them on his blog.