Ritual of Sincerity: A Response to 'Worship at Willow Creek' 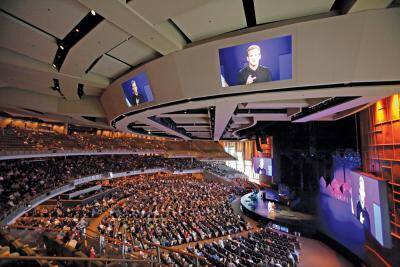 Laurie Ziliak’s article for America (“Worship at Willow Creek”) identifies the impressive ways that Willow Creek Community Church has innovated, through technology and planning, a model of worship that the Catholic Church can learn from. I heartily agree with her generous way of seeking the best in what is different, and not recoiling in some knee-jerk reaction to new styles of  “kids these days” or Protestant “heretics.”

But even with this shared tone of openness to learning from others, I would like to supplement, and constructively critique, her reflection. I was a former worship leader and active member at Willow and am now among the papist enclave. I have maintained warm friendships at Willow, one with a worship leader there, Aaron Niequist. When my friends and I co-authored an ecumenical prayer book, we visited and spoke at Willow’s weekend services. Aaron incorporated some of the book’s songs into the worship. Aaron has even been writing his own albums titled “A New Liturgy,” where he is intentionally trying to make evangelical worship more “liturgical,” and introduce it to Willow—with mixed results.

But I do not wish to merely say that, when evangelicals do away with ritual and liturgy they will eventually reintroduce it. I would like to suggest, in a more radical reading of evangelical worship, that it is a misreading to say, as Ziliak does, that “ritual does not seem to have a presence at Willow Creek.” I can say—as one who has been in the back rooms, read the down-to-the-minute service protocol, obeyed the cue calls through the in-ear monitors, and watched the gestures and faces of those around me on stage—that ritual is intensely present there. But it has, in fact, been veiled by a certain theology of anti-ritualistic sincerity. I certainly don’t think Willow Creek is from the pit of hell (I have told my friend if I’m back in Chicago, I’ll be happy to step on stage again); but there is also something in this ostensibly ritual-less worship style that creeps in through the back door of one’s emotions, as it were, and eats away at deep, reflective, contemplation. I’ll explain:

I start by noting what Ziliak observed at length: Willow Creek’s use of live-feed images of worship leaders on enormous screens. When I attended a Willow-branded congregation in Denver this Christmas, I must state that I had to look down much of time; I was being shown close-ups of expression-loaded faced, eyes squinted and hands raised in pious communication with the deity. Seeing myself from years ago in the faces of these people, I recalled how such expressions, while in part sincere, are also part of a feedback loop of imitation. “Heart-felt expression” is the ritual here; and others are supposed to catch on to it, even if it is not “required” in the obligatory Catholic, liturgical sense. We are, as Rene Girard puts it, mimetic creatures, and we imitate the expressions and desires of those around us. I recall as a teenager, even before I joined the worship team, this magnetic pull to join the “spontaneous” worship—to stand with the wave of people standing up.

Seeing myself mirrored in those jumbotrons, of Michael-Bolton-like, enthusiastic singing, I felt like I was being shown, for lack of better words, spiritual pornography—too much and too close. But I did not want, in such harsh wording, to judge or separate myself from such apparent “sincerity”; and yet I averted my gaze to the floor because it felt like overexposure. A quote from the odd, lively philosopher Slovoj Zizek came to mind:

What if one kneels down and prays not so much to regain one’s own belief but, on the contrary, to get rid of it, to gain a minimal distance from its overproximity, a breathing space? To believe “directly”—without the externalization of a ritual—is a heavy, oppressive, traumatic burden, which, through a ritual, one has a chance of transferring onto an Other (God is In Pain, p. 190).

I can speak from personal experience that I never quite saw how my “sincere, from-the-heart worship” could be a psychological burden until, after a decade of leave, I stepped back into a Catholic liturgy. Both my wife and I were startled at what we experienced there: the pre-made form of liturgy, its obligation, was paradoxically liberating. We were no longer expected to conjure ad hoc sincere worship onto our faces. We could certainly allow the words and gestures to make their way into “internal engagement,” but by accepting the yoke and regiment of ritual we were somehow released of a burden of “over-proximity.”

The distance—I might almost say, “insincerity”—of ritual is, obviously, not the only way to worship the Silent Mystery in which we live, move and have our being. And I think it a sin to judge people’s hearts at Willow. But I will argue that “empty ritual” has a special capacity for inviting contemplation of the empty, infinite, abyss of God that the mystics express. It may be the case that “silence is the first language of God”; and thus perhaps neither ritual nor sincerity might gain us access beyond the front ranks of the angels. But I can say without hesitation that what I once thought was my boisterous sincerity (my “body language indicating I had been clearly moved” in Ziliak’s observation) was in fact my ritual-imitation of my worshipping neighbor. It was also the gesture that I, as a leader, thought I was supposed to project. Nobody escapes cultic ritual, just as nobody escapes culture, just as no one escapes the cycles of imitation. Evangelical worship can sometimes be one long attempt at such an escape.

“Being truly transformed,” shows its fruits, for better or worse, mostly outside the sanctuary. For all us sinners under the sun, the sanctuary is the place where we put on our better self in defiance of our worse self—hoping to win the latter over. Hence there is a sense of “distance” from ourselves in the ritual; this is partly why we dress up in more than pajamas. And it is outside the doors, when we take off the garment that gained us access to the temporary-eschatological-party of Sunday, that God is left with a person who has a knack for lying to, and about, his or her self—even in worship. Instead of seeing worship only as self-expression, we must also see that worship operates on us; what we do will shape us, and it is thereby worth learning from others (like Willow) and improving worship. But I am not in the least convinced that it must look like it is “coming from our heart.” I don’t disagree at all with Ziliak’s quotation of Catholic Church teaching that we are all called to “full participation.” But I fully disagree that the smoke-machines, light-shows, emotion-filled and massive faces on screens, and—most importantly—some visible shift from “empty ritual” to ad hoc sincerity will do anything to help us more fully celebrate “the Sacred Mysteries.” (Willow’s genius lies elsewhere: for one, in their immense, personal, and systematic hospitality to strangers and “seekers.”)

As noted, one of Willow’s worship leaders is already quite uncertain about all of the entertainment, and has thus been experimenting—just a bit—with liturgical forms. He concurs that there is a small but growing dis-ease among evangelicals about their whole rubric of worship; and they are not sure what is next. Indeed, Willow Creek posted a few years ago an extensive study of their congregation, stating that, for all their flare and dazzle, they had grown wide but not deep. (I admire Bill Hybels and all his staff for their humble clarity to reveal such hard lessons learned.) It is with this study that we must qualify Ziliak’s observation that “they are clearly doing something right.” They just did us all a favor and told us that is not necessarily the case: they have learned to draw a crowd (a phenomenon about which the New Testament is skeptical at best), but they are in doubt on how well they’ve drawn up disciples of Jesus.

What I would add to Willow’s lesson is that “sincere worship” is not necessarily a pure, soul-expressed liberation from the dregs of ritual and imitation, but a new ritual. As Max Weber stated a century ago: when you remove sacraments and rituals, they will be replaced by others (be it a work-ethic or “heart-felt expression” as a sign of grace). Unfortunately, however, the essence of this ritual is dubious to me—the belief that it is our “personal relationship with God, ” our “faith,” and not our crusty religion that evoke expression. To this, Catholic ritual offers a theological critique: we don’t just express the liturgy, the liturgy expresses us. Without this, “faith” is the new “works.”

I was once told that, at Vatican II, the Catholic Church became modern just as the modern world was beginning to question modernism. And though there are some techniques to appreciate in Willow (and plenty of friends to love), if the Catholic Church uncritically imitates Willow-worship it may become hyper-modern just as the Willowites start genuinely questioning their hyper-modernism.

Chris Haw is a carpenter, author, husband, and father of two. He is the author of the award-winning book From Willow Creek to Sacred Heart and co-author of Jesus for President. He is working on his PhD in theology and peace studies at Notre Dame University.