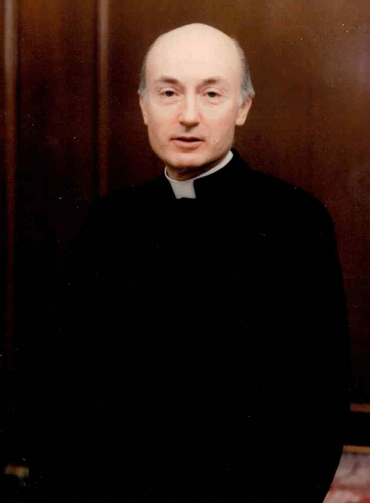 Father George Rutler, S.T.D., pastor of St. Michael’s Church in the Hell's Kitchen neighborhood of New York City, is a popular Catholic writer on historical and religious topics. He is known for his provocative interpretations of world events, often challenging popular myths from a spiritual perspective. His most recent book, “Principalities and Powers: Spiritual Combat 1942-1943,” presents the theory that World War II was a holy war fought for various mixed motivations.

On June 30, Father Rutler published a complimentary study of King George III, giving his alternative perspective on a monarch who is sometimes vilified in popular Independence Day lore as a tyrant. I conducted the following Q&A with Father Rutler by email on July 4.

Why should Americans remember King George III each year on Independence Day?

By default, he was a major player in the Revolution, a role he did not want and one he could not avoid.

How should Americans commemorate King George III on July Fourth?

Keep him in mind as one of the gifted people who distinguished that period—a benign Enlightenment—by erudition and moral balance.

What got you interested in writing about King George III?

One gets weary of the nonsensical clichés about personalities and circumstances of the Revolution. That is partly the price of a long tradition of political myth, and the current pervasive ignorance of history in general. There still are those who think that Paul Revere shouted, "The British are coming!"—Mr. Revere considered himself British, and in fact cried "The regulars are out"—and that Washington fought under a banner designed by Betsy Ross and stood up in the boat crossing the Delaware, and that the Declaration of Independence was signed on July 4, and that it was wholly original and not reliant on documents from as far back as the Scottish Declaration of Arbraoth of 1320 and the English Bill of Rights of 1689, and that the United States is constitutionally a democracy.

In your research, what was the most surprising thing you learned about George III?

Nothing surprised me, since I was pretty familiar with his life, but I became increasingly fascinated with the depth and scope of his mind and his scientific curiosity.

His defeat of France in the Seven Years' War made Britain the dominant world power, sustained by subsequent triumphs over Napoleon, while calmly laying the groundwork for a developed constitutional monarchy. Nor should we underestimate his promotion of an agricultural revolution which transformed his nation's economy. His greatest failure was the loss of thirteen colonies, but in retrospect that may have been a blessing, at least for the British.

Do you plan to write further articles or a book on King George III?

No, although each July 4 one makes some act of reparation for caricatures of King George as a "tyrant."

Any other thoughts about our nation's annual birthday?

We should reflect on the difference between independence and freedom. The former only is the potential for the latter. Misuses of independence through selfishness, greed and stupidity have given us our present government (King George was far more popular in some of the colonies even in the early days of the Revolution than Obama and Congress are today) with leaders starkly in contrast to those of 1776, family political dynasties more imperious and exploitative and costly than an enlightened monarchy, and a tax burden on individuals nearly fifty times more than that exacted from the colonists before the Revolution.

Show Comments (
1
)
Comments are automatically closed two weeks after an article's initial publication. See our comments policy for more.
Frank Gibbons
5 years 7 months ago
Great interview! Keep up the good work -- I've enjoyed all of your contributions to America.
Advertisement