A Response to 'Just Economics' 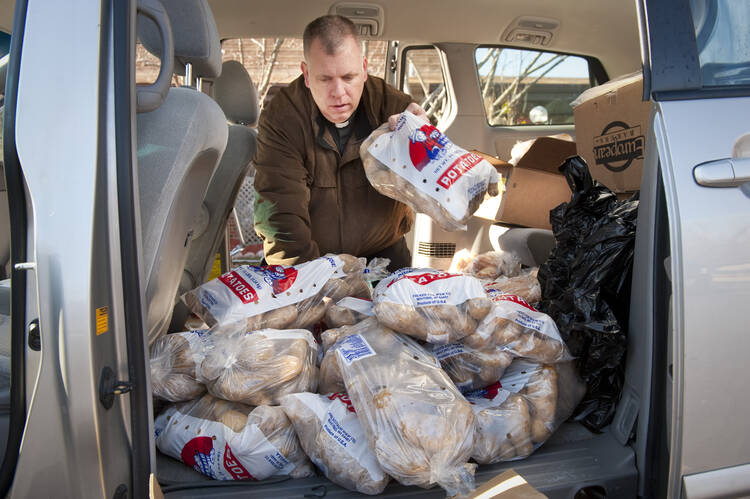 Stacie Beck’s article “Just Economics” (May 6) questions what the author sees as logical and factual inconsistencies within the “social justice agenda.” Beck claims that the expression of Catholic social teachings into which our children are being catechized is illogical, promotes irresponsible and lazy behavior, and is irrelevant to the realities of a modern market economy. But Beck misses the heart of Catholic social teaching, revealing her own logically inconsistent economic assumptions about prosperity, the market and a dislike for the idea of redistribution that drives her analysis.

This month celebrates the fiftieth anniversary of John XXIII’s landmark encyclical Pacem in Terris, which is fondly referred to as the Catholic declaration of human rights. Pacem in Terris begins, “Any well-regulated and productive association of men in society demands the acceptance of one fundamental principle: that each individual man is truly a person” (9). Thus, the very heart of Catholicism’s theological anthropology is revealed. People have value, not because they are useful to society, but because they are created in the image and likeness of God. The economy and markets exist to serve that social order, not the other way around. When the church says social justice demands access to health care and safe housing, Beck asks if that is teaching children that they are entitled to something for nothing. No, it is not. It teaches them that they have inviolable human dignity as children of God.

The goals of social justice assume a society prosperous enough to support them, says Beck. No, social justice assumes a Christian responsibility to build a social order based upon justice in which the life and dignity of every human person is respected. Grounded in the Gospel, Catholic social teaching concretely illustrates the ongoing responsibility of all Catholics and the church as an institution to actively work for the common good. What the goals of social justice do assume is that a society built upon justice can protect the dignity and encourage the participation of all its members. To evaluate the justice and morality of economic structures, we must ask what does it do to people? And how do people participate in it? In a similar vein, Pope John Paul II reiterated numerous times that markets are a means, not an end. If the modern market economy, as it exists, cannot be structured to create a social order in which this is realized—then it is the modern market economy which must be restructured, not children’s catechism books.

Rent-Seeking, which Beck notes, is the term for practices which take without contribution. Nobel Prize winning economist Joseph Stiglitz applied it to the irresponsible behavior by the financial sector before, during and after the Global Financial Crisis of 2008. Beck uses the example of “lobbying for government subsidies that redistribute income, goods, or services from one group to another” without added contribution to the common good. Her implication is that this includes social justice lobbying for redistribution through tax credits and other social protections.

From the perspective of Catholic social thought, nothing could be farther from the truth. Aside from the fact that meeting the basic needs of human persons is a contribution to the common good, these policies also are of economic benefit. Food stamps (or SNAP), unemployment insurance, and the earned income tax credit are all in some sense redistribution of wealth; however, they are also effective economic policies which spur the economy.

If Beck is right, then the entire project of Catholic social thought is faulty. Her argument begins with a particular set of economic assumptions as foundational and not with the understanding of the human person. If one begins with the dignity of the human person and the common good, then the need for justice cannot be answered by increasing charity. Benedict reminds us in Caritas In Veritate that it is not good enough to give someone charity unless the demands of justice have been met. In Catholic social thought, it is never a time of prosperity if the basic human rights of all are not respected.

Meghan Clark, an assistant professor of theology and religious studies at St. John's University, is on the board of directors of America Press, Inc.

Josh is right, Eva, please be more charitable in your comments.