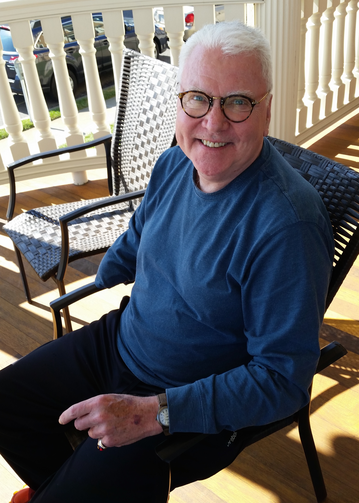 In a fond remembrance of fellow Jesuit Richard Curry, who passed away on Dec. 20 after a long illness, James Martin, S.J., wrote, “Nothing seemed to slow Rick down. He was a kind of perpetual motion machine, always with many irons in the fire: plans for new projects and new books, ideas for helping the handicapped and injured veterans, and a calendar packed with lunches and dinners and baptisms and weddings and funerals. And of course endless fundraising events … Even when his health declined, he soldiered on.”

Father Curry had little choice but to soldier on, considering the many projects and accomplishments he had crowded into his life. A professor of Catholic studies and theater at Georgetown University, Father Curry was also the founder of the National Theatre Workshop for the Handicapped. That effort in turn led to the Wounded Warriors Writers Workshop and the Academy for Veterans, a program that assists veterans returning home from Iraq and Afghanistan who have been disabled in the line of duty. Father Curry also helped open Washington's Dog Tag Bakery, which employs veterans and their spouses while teaching them business skills.

When he wasn’t acting himself, teaching students at NTWH or Georgetown, or helping out at Dog Tag or the Academy for Veterans, Father Curry was engaged in a favorite pastime, cooking and writing about cooking. He was the author of Secrets of Jesuit Breadmaking and Secrets of Jesuit Soupmaking, both of which combined real-life recipes with inspiring and often hilarious stories.

Father Curry was remarkable from the start, born without a right forearm. It would be ridiculous to say he “overcame” this “disability”; Father Curry’s physical distinctiveness was only an obstacle to others; he turned it into the guiding reality and inspiration of his life, the motivation for his work in theater and among psychologically and physically wounded veterans. His legacy will be embodied among the many students, members of the disabled community and disabled veterans he taught, inspired and loved as they continue on to their best work.

When he was a little boy, in the 1950s, the preserved right forearm of St. Francis Xavier, the Jesuit missionary, came to Philadelphia. Strange as this may seem to non-Catholics, this "relic" is particularly well known: it's the arm that the Jesuit used to baptized thousands of people during his missionary days in Africa, India and Japan.

Rick's first-grade teacher, a Catholic sister, thought it would be a good idea for Rick to see the arm—though she didn't expect there would be any sort of miraculous outcome. Neither did his mother, though she wrote a letter to have Rick excused from class to see the relic. Neither of these two women was making any connection between Rick's missing a right forearm, and the visit of the right forearm of St. Francis Xavier.

But his Catholic-school classmates did! They were praying hard for a miracle. Maybe Rick would be healed—and be like all the other children. So when Rick's mother picked him up to drive him to the cathedral downtown, his class was thrilled.

A huge line wound up and down the aisles of the cathedral. Because of the number of people, an announcement was made: visitors would be able only to touch the reliquary, the glass box that held Francis's arm. You wouldn't be able to kiss the reliquary, as some pious Catholics had hoped. But when several priests saw the boy without his right arm, they said to his mother, "Oh, no, he can kiss it!" Rick, however, wanted no such “healing.”

So he kissed the glass case, but pressed the stump of his right arm against himself--hoping that it would not grow.

On his way back home, on the trolley car, he kept checking his arm. But there wasn't any change. No miracle. And when he returned to class, his classmates told them how disappointed they were. Perhaps, they said, he wasn't worthy of a miracle.

But someone else had a very different reaction. When he returned home that night, his sister Denise, who would later become a nun, was hiding behind the drapes of the living room windows. She peeked out. When she saw that no miracle had occurred, she was delighted. "Oh great!" she said. "I'm so happy that nothing happened. Because I like you the way you are!”

Many, many others, through the course of this busy, blessed life, came to the same conclusion.