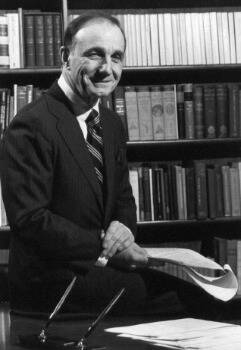 Edmund Pellegrino, M.D., internationally renowned physician and medical ethicist, died on Thursday, June 13, 2013. Often referred to as the Father of Modern Medical Ethics, he is revered among those of us who were his former students for his fatherly care and concern. Though I met Dr. Pellegrino for the first time when he was 68 and I was just beginning my graduate studies in bioethics at Georgetown University, his energy, passion and intellect were immediately obvious. What became clear shortly thereafter was the unrestricted availability and generosity he offered his students and the multitudes who came to him for guidance and wisdom. He had that all too rare combination of prodigious understanding and humility that attracted so many to his office and classroom.

Dr. Pellegrino’s ability to survey a situation quickly and precisely, and then act decisively, resulted in his constantly being called upon to undertake important roles of leadership ranging from his tenure as President of the Catholic University of America to his service as Chair of the United States President’s Council on Bioethics. In addition, these administrative skills of his combined with his unwavering focus on providing the best medical care for patients led other institutional leaders to ask him to initiate and direct several health care departments, centers and schools, such as: the founding chair of medicine, Hunterdon Medical Center in New Jersey; the founding chair of the University of Kentucky’s department of medicine; the founding vice president for the health sciences at the State University of New York at Stony Brook; the founding director of the Center for the Advanced Study of Ethics at Georgetown; and the founding director of the Center for Clinical Bioethics at Georgetown (just recently renamed the Edmund Pellegrino Center).

However, administrative success was by no means Dr. Pellegrino’s primary contribution. In the midst of all this institutional activity, Dr. Pellegrino maintained a stellar academic career that spanned decades. Not only did he author or co-author over 600 articles and 23 books, but his work is considered seminal in the areas of medical ethics, physician-patient relationships, physician responsibility and virtue ethics in healthcare. Whether he was citing cutting edge medical research or insights from the Stoics, his work always called the reader back to what he considered the focus of the profession of medicine—providing the best care possible for the vulnerable patient. In order to provide the best care, medicine itself has to be at the intersection of both cutting edge science and humanities. As Dr. Pellegrino stated:

Medicine has great, and almost unique, cultural force precisely because it is a discipline in need of both…the sciences and the humanities…. Medicine is a human science since it must examine man as person and object simultaneously. On the one hand, to understand Man the object, it uses the objective, factual, experimental language and method of the sciences, necessarily “expurgating” itself of myth; on the other hand, to understand Man the person, it must examine man in all his subjective, imaginative, purposive, self-conscious, and mythopoeic activity.”

I have been asked many times what makes a person, like Dr. Pellegrino, capable of such extensive accomplishments. For Dr. Pellegrino the answer is actually relatively straightforward. Yes, he was indeed above average in terms of being competitive, intelligent and energetic, but more substantively he was driven by his unquenchable care for all patients and his profession of medicine, as well as his unwavering faith in God and love of the Catholic Church. Also he was blessed with Clem, his wife of over 60 years, whose own intellect, determination, faith and love matched his wonderfully, resulting in a close-knit family of seven children who clearly carry on their parents’ gifts.

Bolstered by such love and faith, and motivated by a desire to follow the example of Jesus in bringing true healing to so many, Dr. Pellegrino was courageous and determined in his pursuit of providing and insuring the best care that could be given by physicians and other healthcare professionals. He recognized the need to have both great breadth and depth of understanding, including a solid foundation in classical philosophy, in order to pursue these goals successfully and lead others to do the same. His record of accomplishment, his grateful patients, and the innumerable people who cite him as an inspiration or invaluable colleague, all clearly manifest the fruits of his efforts.

In reflecting on my personal interaction with him over many years, the greatness of Dr. Pellegrino lay in his quick wit, his constant encouragement, his unshakeable faith in God and people, and in his generous sharing of himself through his wonderful family whom I have had the privilege to come to know. May God return to him a hundredfold the blessings he gave to others. That should stress the Heavenly reserves just a bit!

Kevin T. FitzGerald, S.J., Ph.D., Ph.D., is the Dr. David Lauler Chair of Catholic Health Care Ethics in the Center for Clinical Bioethics at Georgetown University and an Associate Professor in the Department of Oncology at the Georgetown University Medical Center. His research efforts focus on the investigation of abnormal gene expression in cancer and on ethical issues in biomedical research. He is a founding member of Do No Harm, a member of the ethics committee for the March of Dimes and a member of the Stem Cell Research Commission for the State of Maryland. In addition, he served until March 2009 as a member of the DHHS Secretary’s Advisory Committee on Genetics, Health, and Society.