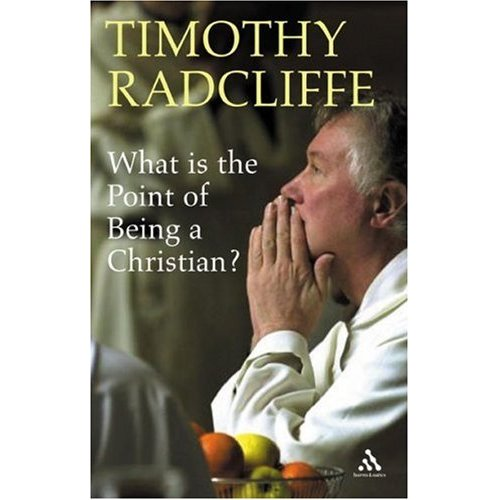 I am frequently asked by spiritual directees or parishioners to recommend a good spiritual reading book. For some time now, my first initial response was to point them to Gerard Hughes S.J.'s excellent book, God of Surprises (Darton-Longman-Todd, 2003). Most who follow that suggestion tell me how helpful that great book on spiritual guidance was for them. Now I have a second excellent book to recommend. I took it with me to read on my recent annual retreat: Timothy Radcliffe O.P.'s, What is the Point of Being Christian? (Burns and Oates, 2005).

A winner of the Runcie award for best theological book of 2005, Radcliffe's title turned me off at first. It struck me as being too apologetic in tone. But as he notes: "The church is home for everyone, especially those whose lives are a mess. It is fitting that the first Christian to make it to paradise was the thief who was crucified beside Jesus. According to an early Syriac poem, when he arrived at the gates of heaven, the angel who looked after such things tried not to let him in because he was not the sort of person who belonged there. Anyway, a community which founded its existence on the claim to moral superiority would not only be repulsive but would inevitably invite people to search for our failures and expose them with glee. If the churches are so often attacked in the press and our every sin given banner headlines, then this is because it is generally but wrongly assumed that the point of being a Christian is to be better than other people."

In fact, the point of being a Christian is to find a place of evident freedom, courage, joy and hope. For a Christian life is a pilgrimage. We journey forward with deep conviction but, like every pilgrim, there is space for uncertainty and for the unsure. Radcliffe says: "We must walk with people, as Jesus walked with the disciples to Emmaus, even if, like those disciples, they sometimes seem to us to start off by walking in the wrong direction." As Radcliffe elsewhere notes: "We too are pilgrims who do not know all the answers in advance."

The best apologetic for the church would be that it is a place where people find a freedom and joy that make no sense if God did not exist. Yes, the church teaches rules and commandments but they are there to foster genuine freedom. Samuel Beckett once wrote: "To find form that accommodates the mess, that is the task of the artist." Radcliffe adds that this is also the task of the pastor. "In whatever mess we may be living, a story can be told that will make some sense of it and a story that leads to the kingdom." "Orthodoxy," Radcliffe insists "does not mean being rigid but finding ways to speak about our faith in ways that keep open the pilgrimage towards mystery."

Our God must be roomy. Radcliffe evokes "the mystery of God whose center is nowhere and whose circumference is everywhere and for whom no one is on the edge." Two of the chapters in the book I found especially illuminating was one called "The Body Electric" which dealt with chastity and another "Root Shock" which treats of healing divisions in the church. Radcliffe knows well we are bodies, with sex and the experience of place encoded in our muscles. He cites Thomas Aquinas: "To think sex is repulsive is a failure of true chastity and a moral defect." ( S.T., II, II, 142). He notes also, with Herbert Mc Cabe, that "chastity which is not a manifestation of love is merely a corpse of true chastity." Chastity is about getting real and becoming liberated from mere fantasies. It faces the dangers ingredient in infatuation and lust. The latter depersonalizes sex and, often, involves domination of the other. Casual sex is a kind of lie. We say something with our bodies but deny it in our lives. As a kind of aesthetic discipline, chastity asks us to look at the faces and bodies of others as a great painter would.

In the chapter on "Root Shock," Radcliffe contrasts what he calls "communio Catholics," strong identity Catholics whose watchword is "ubi ecclesia, ibi Christus"—where the church is, there is Christ. For communio Catholics, the cross is central. In contrast, Kingdom Catholics insist that "ubi Christus, ibi ecclesia" must go. Christ is incarnate and found not just in Christians or within the church. Kingdom Catholics insist that there is no revelation without liberation and the the Holy Spirit is found in all human beings. They insist that we should not fear that the truth will harm truth and they see the church as a sanctuary (both in the sense of being a kind of temple but in the other sense as a place where weary, weak and fumbling people can find a respite and a home). The root condition for any church reform must be found in a commitment to truth, truth telling and deep charity or love of the other. Evoking Saint Ambrose, Radcliffe remarks that God's rest is in humanity. God finds her comfort there!

For me, a sign of a good spiritual book is that it causes me to linger over and return to passages. It feeds my mind but my heart as well. Radcliffe is a gifted writer. The book is replete with references to movies, novels, poetry. As someone who, at times, likes to just sit quietly before icons, I was taken with Radcliffe's remark that the icons, the eyes of the saints, look at us. As he notes: "The skill of looking at icons, the discipline of reading them, is the strange skill of letting yourself be seen, be read." Letting yourself be seen, be read, is not a bad way to describe the kind of freedom, joy, truth-telling, courage of pilgrims which the church is meant to foster. I came away from reading the book with a genuine desire for such greater freedom, encounter with truth, joy and courage.