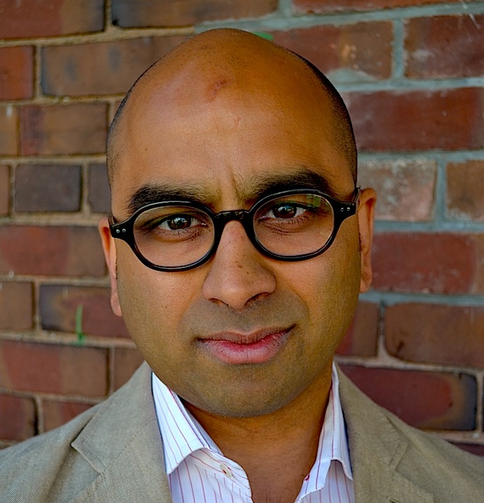 Randy Boyagoda is a Canadian writer-critic and Associate Professor of American Studies in the English Department at Ryerson University, where he serves as Director of Zone Learning. He holds a BA (1999) from the University of Toronto as well as an MA (2001) and PhD (2005) from Boston University. He held a postdoctoral fellowship at the University of Notre Dame. He lives in Toronto with his wife and four daughters.

As an author, Mr. Boyagoda is best known for his novels Governor of the Northern Province (2006) and Beggar's Feast (2011), but also for contributing to a series of publications which include The New York Times, Wall Street Journal, Financial Times, New Statesman, First Things, National Review, and Harper’s.

His new book, "Richard John Neuhaus: A Life in the Public Square" is due from Image Books on February 10. A biography of Father Richard John Neuhaus (1936-2009), founder of the ecumenical journal First Things, the book was supported by the Social Sciences and Humanities Research Council of Canada. On Jan. 15, I interviewed Mr. Boyagoda by email about this new work.

Your past works included literary fiction and studies of modern American literature, culture and immigration. What inspired you to write a biography about Father Richard John Neuhaus?

Shortly after Fr. Neuhaus died, I wrote an essay about his life and work for The Walrus, a Canadian magazine of politics and cultural affairs. The premise of the piece was to introduce Canadian readers to arguably the most influential Canadian-born U.S. intellectual of the past fifty years, mindful that very few would know about him, while many of Fr. Neuhaus’ American readers and admirers might not know he was born and raised in small-town Canada.

To be honest, that was the beginning and end of it, or so I thought. About a year later, I wrote an informal note to Fr. Neuhaus’s close friend and longtime collaborator, George Weigel (whom I’d briefly met, coincidentally, thanks to my wife’s going to college with one of his daughters). I asked him if anyone was writing a biography and expected the answer to be yes. When I learned otherwise, I pursued the work—with welcome cooperation from many in Fr. Neuhaus’ circle (and likewise from many of his critics) but, importantly, I wrote this on my own terms. Five years later, the book’s completed and coming out, in February.

How did you come to know Father Neuhaus?

Like most people, I knew him primarily through his writing for First Things magazine. When I was in graduate school, I learned of the journal and found it of great interest at the time, not least because it demonstrated that you could be a person of faith with wide and cosmopolitan intellectual interests informed by your faith. During graduate school, in fact, I wrote a few pieces for the magazine and met him, once, after attending a Mass he celebrated at his parish in New York, Immaculate Conception. Afterwards, I introduced myself to him and mentioned I’d written something for the magazine. He was very, very impressed that a mere graduate student had made it into the discriminating pages of First Things, and very quickly, his compliment to me became a compliment to himself and his magazine. My brief encounter with him ended when in his booming, sonorous voice, he encouraged me to keep writing if I wanted to be a writer, and sent me on my way.

Who is your audience for this book?

I think there are many audiences for this book, not least Fr. Neuhaus’ sizeable readership from First Things, and also people interested in religion and public life from all vantages, including Catholics and Protestants who read magazines like America and others, and also secular readers and intellectuals interested in the questions Fr. Neuhaus explored through his life and work. Also, and this is purely a shout-out for the production team at Image Books, but this is a beautifully-made book, which—whether you’re an Ultramontanist, ultra atheist, or anyone in between—will look very good on any coffee table or bookshelf!

What do you hope readers will take away from the book?

I hope they’ll appreciate that for all the political controversies that Fr. Neuhaus was involved in over his years in public life, and these were many, he really understood his work in vocational terms, which means, he understood his work foremost as the work of a man of God. In other words, it’s too simple to dismiss him as a Republican in a Roman collar, as many of his later critics did.

Moreover, I hope readers from all spectrums, in learning the full story of Fr. Neuhaus’ life, will appreciate that his moving from Lutheran to Catholic, and from Left to Right, isn’t as straightforward, triumphant or disappointing (depending on your own religious and intellectual politics) as these markers imply.

Father Neuhaus, a former Lutheran pastor, converted to Catholicism and founded the ecumenical journal First Things in 1990. But his influence as a public intellectual extended to the White House under George W. Bush, leading Time to dub him one of The 25 Most Influential Evangelicals in America in 2005. Given his strong public presence, what surprises did you learn while researching the man, if any?

Well, this really continues on from my points above, and I’ll offer one surprise. You’ll have to read the book to get the rest.

Fr. Neuhaus often observed that he had little interest in Left/Right diagnoses of his views. That said, obviously he became more conservative in many ways over his years, but his formation in the Missouri Synod, in the 1940s and 1950s especially, was such that what might seem crypto-conservative now (his lifelong interest in Catholicism, for instance) actually marked him out as a dangerous liberal, in certain 1960s Lutheran circles. In other words, our now-standard Left/Right divisions, for understanding church politics and politics proper, really fail to capture the complexity of the religious and political formation that Neuhaus experienced.

On a personal level, what resonated most strongly for you in the life of Father Neuhaus?

I think it’s the joyfulness, ambition and unstinting energy that he brought to the fulfillment of his vocation, throughout his life. Whether you agree with his particular positions on this issue or that, his is an example of Christian witness in public life that you can learn from, in any number of ways.

Father Neuhaus died of cancer at 72, a relatively young age. How do you assess his legacy today?

What’s your favorite scripture passage and why?

The opening of John’s Gospel, because I can think of no fuller or finer expression of how human existence itself was transformed by the transformation of the Word into flesh; the concluding lines of John’s Gospel stir almost as much, with a different kind of mystical fullness.

Pope Francis recently visited Sri Lanka, the land of your parents who immigrated to Canada in 1967. What is your personal impression of Pope Francis?

I actually wrote about Sri Lanka’s public life and recent political developments in context of the pope’s visit for the New York Times, just this past week. As for the pope himself, I’m more interested in making sense of the impression Pope Francis has made on the world at large. That he’s become so intensely observed and admired suggests the great moral vacuum of global public life today, and the papacy’s ability to fill that vacuum like no other.

What’s your next project?

I’m writing a new novel at present, set in Toronto, Sri Lanka, and the Middle East, about the efforts of a middle-aged man—a husband, father, and professor—to make sense of his life and faith when the world around him threatens these, in both dramatic and everyday ways. You could say, in some ways, it’s an autobiographical novel. Perhaps having written so much about someone else’s life, I’d like to write a little about my own now!

Do you have any hopes for the future?

Indeed, and Fr. Neuhaus was especially eloquent on this point. He always counseled against optimism, which was merely a condition of the eye. Instead, he persuasively recommended we try for hope, a deeper and more structuring sensibility and ordering virtue. Hope is always in abundant need and never more so these days, when either global crises or easy materialistic enjoyments can encourage us to abandon it. So my hope, for the future, is to cultivate, evermore, a hope for the right ordering of public life in the U.S., Canada, and around the world and try to contribute to this as best I can through my own vocation, not least with my new book on the life and times of Richard John Neuhaus.