Putting Out Into the Deep: 6 Questions for Colleen Carroll Campbell 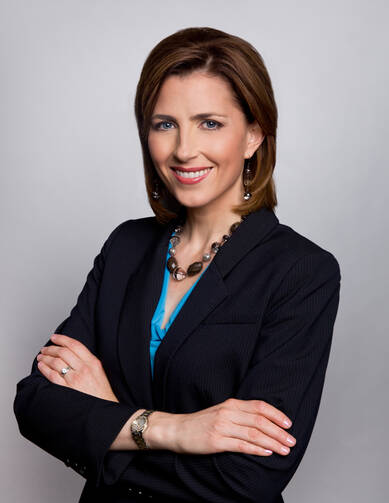 Last year, Ms. Campbell served as the founding executive producer and anchor of EWTN News Nightly, a television newscast airing worldwide on EWTN, before going on maternity leave. She was also the creator and host of EWTN’s Faith & Culture television and radio interview show. In 2013, she anchored EWTN’s live television coverage of the historic election and installation of Pope Francis in Rome.

The paperback edition of her Christopher Award-winning spiritual memoir, My Sisters the Saints, will be published by Image Doubleday on Sept. 28. On July 28, I interviewed Ms. Campbell by email about her book and her work. The following text is unabridged.

You went on maternity leave from your Catholic television news program several months ago. How are you and your family doing?

We’re doing wonderfully. It’s a crazy, busy, exhausting time–but life is full, and full of joy. God is so good.

Can we expect you back on television soon?

I’m sure I’ll always keep a hand in the print and broadcast media, especially the secular media where I’ve spent most of my career. These days, though, longer-form writing and commentary suit my life more than slavishly following the news cycle or adding more decibels to our national shouting matches. Even thoughtful television barely scratches the surface of the big issues. It’s the nature of the beast. I feel called to use the limited work time I have now to “put out into the deep” – to explore the deeper questions you can’t tackle on daily deadlines or in a medium designed to distract. I want to touch hearts and change lives. I know a lot of books that have done that. I don’t know too many TV shows that have.

I also feel called, partly due to the response I’ve received on My Sisters the Saints, to move more in the direction of storytelling. In a society marked by so much division and rancor, and a church too often sidetracked by intramural squabbling, I think stories are a way for people of faith to cut through the clutter and make a genuine impact. Jesus operated this way—the parable principle. I think it’s as relevant now as ever.

I’ve always loved that quote from Flannery O’Connor: “A story is a way to say something that can’t be said any other way… You tell a story because a statement would be inadequate.” I discovered that in writing My Sisters the Saints, a book that didn’t begin as a memoir. It only became one when I realized that I could not convey the truths that had transformed my faith and my life without sharing the context in which I had learned them, which is to say, in the midst of my own messy, surprising and sometimes painful personal story.

The paperback edition of My Sisters the Saints is due on Sept. 23. How did the 2012 hardcover edition of the book do with readers?

The hardcover did very well, thanks be to God. I worked six years in secret and solitude on this memoir, unsure that I would have the courage to put something this revealing out there when the time came to publish it. Unlike my first book, The New Faithful, this one isn’t a journalistic study or the sort of book that attracts headlines or provokes cable news debates. It’s much more intimate and it caught on more slowly and steadily, with one reader recommending it to another. I’m grateful that it’s now in its seventh hardcover printing and has won several awards. But the most gratifying part of writing My Sisters the Saints has been the direct feedback I’ve received from readers: hundreds of poignant, personal emails and letters telling me how the book moved them or helped them through a trial or awakened them to the possibility of genuine friendship with saints. I guess readers feel that if I’m willing to put my story out there, warts and all, they can do the same. I appreciate that, because in sharing how my story strengthened their faith, they’ve strengthened mine. That’s fitting, I suppose, given the underlying message of My Sisters the Saints: that we’re never alone on our journey toward God.

Who is your audience for this book?

Based on the feedback I’ve received, it’s very broad. I’ve heard from men and women, cradle Catholics and converts, priests and nuns as well as lay people, non-Catholics and even some non-Christians. I’ve received emails from grandfathers and teenage girls and everyone in between. Some relate to my struggle to navigate the hook-up culture on campus. Others resonate with my battle with infertility or my father’s journey through Alzheimer’s. Still others connect with my skepticism that the saints could really speak to my modern problems—and my surprising discovery that they could become some of my dearest friends and wisest guides.

The book has a strong appeal to women, of course. Our sound-bite culture tends to pit women against each other and there’s not much nuance in the way our views are represented. We’re either feminists as NOW defines a feminist or we’re anti-feminists. We either want liberation NARAL-style or we want a return to the 1950s. Most women I know don’t think in those terms. They cherish marriage, motherhood and a rich family life, but they wrestle with the demands of their roles as wives, mothers and daughters caring for aging parents. They want to use their gifts fully in professional and public life, but they don’t want to sacrifice their personal happiness at the altar of the all-consuming career. They agree that we need a woman’s perspective, as Pope Francis put it last year, “wherever we make important decisions” in the church and society. And they’re not blind to the flaws of church leaders, their fellow Catholics or themselves. But they see faith as a liberating force in their lives, not an oppressive one. So I think they can relate to my story of discovering the liberating power of the Catholic faith in the midst of contemporary questions and trials.

My Sisters the Saints isn’t just a “women’s book,” though—as many male readers have reminded me. Some write specifically to tell me how the book affirmed them as men, that reading about my relationships with my father and husband gave them insight into their own roles as husbands and fathers. And of course, though the saints I profiled in My Sisters the Saints are women, I also wrote at length about the impact of holy men such as John of the Cross and Pope John Paul II on my journey. Male or female, the saints are powerful guides. And sometimes it’s the very saint you never expected who winds up changing your life.

In the book, you talk about six women saints who have influenced your faith life. Is there one woman in particular who is your “go-to saint” when you need inspiration or help nowadays?

Each of the holy women I wrote about in My Sisters the Saints had a profound impact on me, and their support at crucial points in my journey made them friends for life—and, I hope, for eternity. Teresa of Avila and her decades-long struggle to overcome worldliness and status-seeking spoke to me during my frenetic college years and jump-started my spiritual quest. Therese of Lisieux helped me grapple with my father’s journey through Alzheimer’s disease, a trial she knew from her own father’s descent into dementia. Faustina of Poland guided me as I struggled to choose between continuing my work as a presidential speechwriter in the White House and marrying a man who was smack in the middle of medical school in a city 800 miles away. Edith Stein offered me insight and consolation in the midst of my battle with infertility. Mother Teresa did the same at a time in my life when I was feeling shades of the same abandonment by God that she described so poignantly in her private writings. And Mary, the Mother of God, was with me all along, but in a special way in my quest for motherhood.

To answer your question, though, Mary is my “go-to saint.” I can admire and relate to elements of each of the women I profile in My Sisters the Saints, but those elements unite most fully in Mary. She is a mother to me in a very real way, a way that feels more palpable with each passing year.

It’s funny, because when I was younger, I found Mary embarrassing. I had a certain fondness for her, but I also had the sense that Marian devotion was too kitschy and “pre-Vatican II” for a serious Catholic focused on Christ.

After studying the documents of Vatican II, I realized how mistaken I was. Mary truly is the premier Christian disciple and the most liberated woman who ever lived. She’s not liberated by the world’s standards, but she’s as courageous as they come: a woman who said “yes” to God every single moment of her life—even long after He first asked for her cooperation, when doing His will led to suffering and apparent defeat. Her inner strength was astounding, precisely because she opened herself so completely to God’s grace.

Drawing closer to Mary has only deepened my intimacy with Jesus. And through the challenges and trials I relate in My Sisters the Saints, I’ve discovered that the words of my favorite Marian prayer from childhood really are true: “Never was it known that anyone who fled to your protection, implored your help or sought your intercession was left unaided.” She’s never let me down.

I hope the book leads readers to Jesus. That’s my bottom line. The saints were instrumental in doing that for me, so I hope that my story of coming to know and love the saints will inspire readers to do the same—and in doing so, to grow closer to Jesus and His church. And in fact, many readers have told me that My Sisters the Saints made them take a second look at saints they never knew before, whose writings they now want to read for themselves. I can’t think of a better takeaway than that.