Can a spotlight on all archives of abuse help ‘restore the faith’? 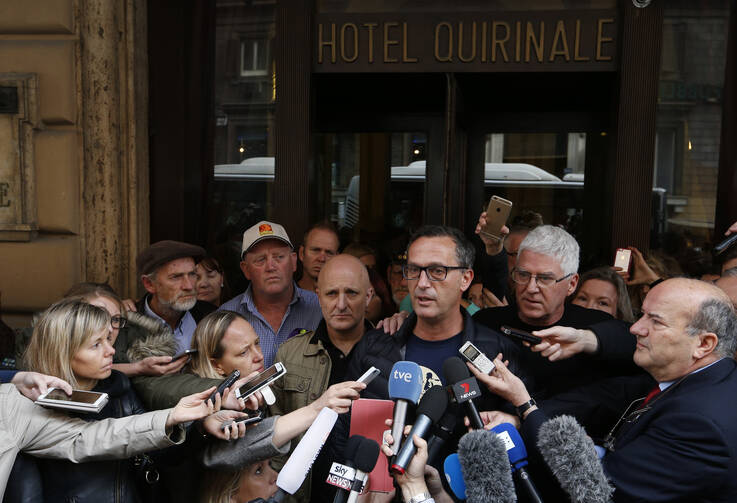 It has been a grim couple of days reading about and listening to testimony related to past abuse of children by Catholic priests, revelations from reports and documents that have been moldering in diocesan archives for decades. On March 1, as Cardinal Pell began his extraordinary testimony in Rome regarding acts of sexual assault over decades in Australia that led to scores of suicides, Pennsylvania Attorney General Kathleen G. Kane, who had forced open the files of the Diocese of Altoona-Johnstown, released yet another grand jury report on clerical abuse. Though elements of the story of abuse in Altoona-Johnstown were already known because of press reports, this grand jury report marked the first, detailed and gruesome accounting of decades of criminal acts by at least 50 priests or religious leaders and attempts to obscure those crimes and hide away those offenders by diocesan officials.

Today, Altoona-Johnstown’s current leader Bishop Mark Bartchak, acknowledging the report and its indictment of past episcopal leadership in the diocese, made a renewed commitment to respond to past clerical abuse of children and to efforts to prevent such acts in the present.

After extending his “heartfelt and sincere apology… to the victims, to their families, to the faithful people of our diocese, to the good priests of our Diocese, and to the public,” Bartchak pledged “to do more” to protect the children of Altoona-Johnstown. “Let me start with a significant commitment to transparency, past and future.”

A list of “all priests who have been the subject of credible allegations, along with each priest’s current status” will be posted to the diocesan website, he said.

“In addition, I will undertake a full review of our diocesan policies and procedures regarding child protection and will make all changes that should be made. This review will be comprehensive and will include our training and background check programs, the diocesan review board, and communication on reporting requirements.”

The bishop’s public apology included the Attorney General’s hotline, 888-538-8541, for reporting suspected abuse and the number for the diocesan victim assistance coordinator, Jean Johnstone, who can be contacted at 814-944-9388.

The commitment to transparency in Altoona-Johnstown is welcome now. It’s unfortunate that it took the full investigatory powers of the attorney general’s office to make it so.

That transparency would have been equally welcome 10, 20 or 30 years ago. The same can be said for dioceses all around the country and indeed throughout the rest of the Catholic world where archives and reports are still awaiting court orders before they will be reviewed and released. Accepting the Oscar for Best Picture a few days ago, “Spotlight” producer Michael Sugar said he hoped the film’s message would reach the pope. “This film gave a voice to survivors, and this Oscar amplifies that voice, which we hope will become a choir that will resonate all the way to the Vatican,” he said in his acceptance speech. “Pope Francis, it’s time to protect the children and restore the faith.”

Indeed it is far past time for church officials to come clean on what and on all that they know about priest abusers and misguided efforts to protect the church from scandal by keeping these offenders from prosecution. Pope Francis should put an end to this soul-crushing grind of scattered archives opened only under juridical duress and require bishops around the world to release what they know, now. Let’s get this over with, so we can restore the victims and begin to, as Mr. Sugar put it, “restore the faith.” The church should bring everything it knows out in to the light of day from whatever musty corners its dossiers and documents are hidden; that way fewer bishops will have to be drawn out into media spotlights in compelled testimony that only forces us to relive the horror over and over again.

As another penance for continued efforts to keep the whole story from the people of God and the general public, the church in the United States should reverse institutional resistance to efforts to extend or eliminate the statute of limitations of acts of child sexual assault, acknowledging how long and painful the process is for many victims to understand what has been done to them and to come forward to seek restoration and justice.

Kevin Clarke
@ClarkeAtAmericaclarke@americamedia.org
Show Comments (
4
)
Comments are automatically closed two weeks after an article's initial publication. See our comments policy for more.
Carolyn Disco
6 years 9 months ago
Here's the text of the grand jury report for a much fuller understanding of the bishops' conduct in enabling abuse. Important reading. Details matter. http://www.bishop-accountability.org/reports/2016_03_01_Pennsylvania_Grand_Jury_Report_on_Diocese_of_Altoona_Johnstown.pdf See eight other grand jury/attorney general investigations at http://www.bishop-accountability.org/AtAGlance/reports.htm 1) New York NY - Westchester County Grand Jury Report, June 19, 2002 2) Rockville Centre NY - Suffolk County Grand Jury Report, February 10, 2003 3) Manchester NH - Attorney General’s Report with investigative archive, March 3, 2003 4) Boston MA - Reilly Report and Executive Summary, July 23, 2003 5) Philadelphia PA - Report of the Grand Jury, September 25, 2003 (unsealed September 15, 2005; made public March 29, 2011) 6 ) Portland ME - Attorney General’s Report, February 24, 2004. See also the attorney general's investigative materials released on May 27, 2005 and July 8, 2005. 7) Philadelphia PA - Grand Jury Report, September 15, 2005 8) Philadelphia PA - Report of the Grand Jury, dated January 21, 2011, released February 10, 2011; see also criminal charges Also the long list of dioceses at the end of the movie, Spotlight, gives a sense of the breadth of abuse worldwide. I believe every diocese has the same type of record, whether unearthed by government investigations or not. The playbook was and is the same. Report to local law enforcement is required in the Charter only where there is a mandatory reporting law. Bp Bartchak promises more. Let's see. BTW, the Charter is full of holes, and there is no auditing of the attached essential norms, which is what constitutes particular law in the church. Auditors have no right of access to personnel files and receive only those accusations the bishop chooses to pass on. Audit reports typically stipulate their decisions are dependent on the information made available to them by the bishop. A courageous retired priest and canon lawyer, Rev. James Connell, sent a blistering audit critique to Rome in January. See http://www.bishop-accountability.org/news2016/01_02/2016_01_04_Whistleblowers_Re_the_1.pdf Excerpt: "the USCCB prevents the auditors from verifying that all sexual abuse cases that should be sent to the CDF actually are sent. Some diocesan bishops or major superiors might not send cases to the CDF and this would go undetected. Another example is that some diocesan bishops forbid the auditors from conducting onsite parish reviews – and they get away with it. The minors and vulnerable adults who need protection are in the parishes, not in the diocesan offices. These bishops are able to discard onsite parish audits, a step that would help to provide protection." The beat goes on...I must say this is among the better reports I've seen in America over the years, Kevin Clarke. I usually expect to find probing material elsewhere. Bp Bartchak's words are fine, but it's actions that matter. The list of credible allegations he says he will release should include not only the present assignments of (alleged) perpetrators, but their full service records, dates, and photos. Parishioners deserve to know where these priests have been in ministry. Some dioceses leave the information online for a certain period and then remove it. Check www.bishopaccountability.org for a full database of public information, including what has been removed. It's an indispensable archive.
Kevin Clarke
6 years 8 months ago

You may find this article of interest:

William Rydberg
6 years 9 months ago
Can't say that the idea of suspending the statute of limitations act narrowly for just Religious Institutions in America is a good idea in my opinion. One would think that suspending general immunity for government related institutions like schools would needs be included in any proposal (some have said the number and level of abuse in other area are greater in number, but I am no expert because those stats are confidential under the law, or at least very hard to obtain).. Otherwise one would perforce be introducing a special status for all persons working in government, subjecting employees and ultimately all taxpayers to virtually unlimited liability. And if I am not mistaken, the reason why there is so much ink in the founding documents of the Republic about Church and State, was TO PROTECT RELIGION from government interference. What the Author is proposing is the opposite TO PROTECT GOVERNMENT in my opinion. In my opinion, the author may have his heart in the right place. But in my opinion the result would perversion of justice. In my opinion, a healthy Republic requires blind justice, not vengeful justice. To start fiddling with the law, retroactively rewriting past laws, is a recipe for societal breakdown.
MICHAEL SKIENDZIELEWSKI
6 years 9 months ago
The Diocese of Altoona-Johnstown released a statement indicating that they are cooperating with the authorities and will continue to do so. “This is a painful and difficult time in our Diocesan Church,” Bishop Mark L. Bartchak said in a statement released Tuesday. “I deeply regret any harm that has come to children, and I urge the faithful to join me in praying for the victims of abuse.” The “RESPONSE” from USA RCC leadership is always the same. The USCCB must provide this template (canned response) when the latest controversy re clergy sexual abuse hits the media. It’s always a “painful and difficult time” FOR THE CHURCH. What about the painful, horrific, tormented, anxiety and depression-filled LIVES OF THE VICTIMS? The USA RCC leadership is always “regretting the harm that has come to children”. Why the hell didn’t the leadership act to protect the children when they had the opportunity and moral responsibility to do so at the time of the sexual assaults? Well, of course EVERYONE needs prayers, including the victims. What the victims and potential, future victims need more than anything is ACTION, HONOR, COMPASSION, and INTEGRITY AND ACCOUNTABILITY on the part of USA RCC leadership when they become aware of credible allegations of clergy sexual abuse. Bartchak and all of your colleagues, remember this……..NOTHING is more important than the innocence and protection of the mind, body, spirit and soul of the children and young adults in your parishes from sexual abuse and predation. Michael Skiendzielewski Captain (retired) Philadelphia Police Dept