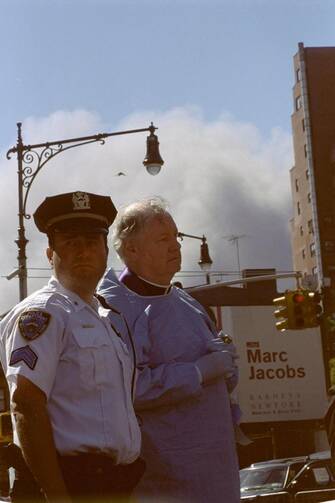 Cardinal Edward Michael Egan, who died March 5 at the age of 82, may have had one of his greater moments as a churchman during 9-11 at Ground Zero. In response to New York’s Mayor Rudy Giuliani, who needed to comfort and console his people before they even knew what had happened at 9-11 when passenger jets took down the iconic Twin Towers, Cardinal Egan went to the scene. On that September morning Cardinal Egan began days of ministry to workers, injured and deceased, that went on day after day. On the scene he risked contamination to the point that each night he had to get rid of all the clothes he wore—even his shoes. His was a practical ministry.

He drew some controversy for his actions before 9-11, especially the handling of cases of sexual abuse of minors by clergy, especially when he called clerics individual contractors when it came to arguments in cases of pedophilia. After 9-11, Cardinal Egan came more beloved.

On day one he met with workers awaiting victims at a nearby hospital, including a young student doctor whom he comforted as the physician in training awaited the crash victims, knowing his father was in the falling towers in the distance. Cardinal Egan sought to draw the distraught young man aside, but the student would not leave because he said his duty was to be with the sick, no matter his personal involvement in the crisis.

Days later Cardinal Egan reported this to Pope John Paul II, who asked him to arrange for the young man to receive money from the pope to help pay medical school expenses now that the student’s father was gone. (Cardinal Egan received some criticism for leaving for Rome to attend a Synod after September 11, but he was eager to return home.)

Cardinal Egan had no worries for his own health amid the smoldering rubble. He saw that the breadth of his ministry extended well beyond leading prayers and funerals at St. Patrick’s Cathedral for those who worked at the Twin Towers and the firefighters who tried to rescue them. He worked with rescuers, one who said he had offered the last rites—actually offered prayers with a dying man—to a victim. The cardinal felt no need to give the man a theology briefing on last rites, but only to thank the rescuer for his care.

Cardinal Egan did not get much praise for what he did. By nature, he was not gregarious like his predecessor Cardinal John O’Connor, who kissed women reporters and playfully punched in the arm the men on the church media beat. Nor was he like Cardinal Timothy Dolan, who succeeded him, another gregarious Irishman who was never camera shy.

Cardinal Egan was a canon lawyer who had spent most of his years in Rome. He had a personal friendship with Pope John Paul II from his work with him on revising the church’s Code of Canon Law. He loved the church and its institution from his days studying in Rome and later working there. He loved his role leading the Diocese of Bridgeport, Connecticut and the Archdiocese of New York and the people there. He excelled as a church businessman. He was aware that, as one Catholic hospital official has said, without margin there is no mission. That’s a financial reality that Cardinal Egan knew, but he also will pray for all of us from the boardroom seat he assumes now in heaven.

Mary Ann Walsh, R.S.M., is a member of the Northeast Community of the Sisters of Mercy of the Americas and the U.S. Church Correspondence for America.