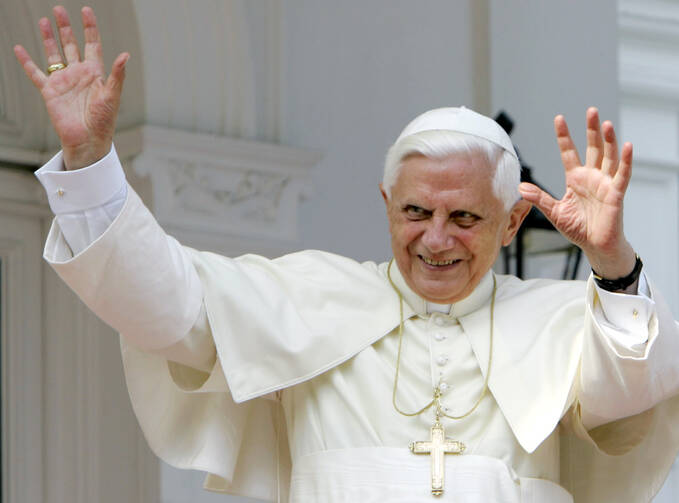 The Holy Father’s resignation is a selfless and noble act done for the good of the church that he has loved and served for decades.  The resignation, announced this morning and set to take effect on Feb. 28, while surprising to almost everyone, is not completely unprecedented.  Several popes have resigned, including Gregory XII in the 15th century, in the midst of the Western schism; and, most famously, Celestine V who was "litterarily" consigned to hell in Dante’s Inferno for his resignation in 1294.  More recently, there had been speculation around the time of Blessed John Paul’s declining health as a result of his Parkinson’s disease, but John Paul opted to continue in his job, providing a sign of human suffering for all to witness.  The pope is old and sick, John Paul would say frequently, but his suffering is part of the human condition.  For me, it was a moving testimony to John Paul’s desire to serve even during a time of struggles.

Pope Benedict sees things a different way.  In his statement, he explicitly pointed to his declining health as a reason for his resignation.  “I have come to the certainty that my strengths, due to an advanced age, are no longer suited to an adequate exercise.”  He continued: “In today’s world, subject to so many rapid changes and shaken by questions of deep relevance for the life of faith, in order to govern the bark of St. Peter and proclaim the gospel, both strength of mind and body are necessary, strength which in the last few months has deteriorated in me to the extent that I have had to recognize my incapacity to adequately fulfill the ministry entrusted to me.”

“For this reason,” he continued, “and well aware of the seriousness of this act, with full freedom, I declare that I renounce the ministry of bishop of Rome, successor of St. Peter.”

The pope’s dramatic resignation seemed to shock many in the Vatican, including the papal spokesman, Federico Lombardi, SJ. “The pope took us by surprise,” he said.  To find a similarly surprising event one can look to Pope John XXIII, who served as pope between 1958 and 1963.  John XIII caught the Vatican, and his cardinals, by complete surprise when he announced the convening of the Second Vatican Council, which he said, came upon him after much deliberation, but rather, as he said, something that “came forth like the flower of an unexpected spring.”  For all the bureaucracy in the Vatican, the pope is still his own man.

In the past year or so there has been increased speculation as to Benedict’s ability to do his job, and carry it out the way that he would like to.  Trips have been curtailed and shortened on various occasions, and even his appearances in the Vatican have included his moving around on portable devices, as an aid his walking.  Like anyone of his advanced age, he had to ask himself whether or not he could do the job.

(A few years ago the Jesuit superior general, Peter-Hans Kolvenbach, SJ, became the first Jesuit superior general to resign.  Interestingly, Father Kolvenbach, who was also aging and in declining health,  once confided to his Jesuit advisers that it would be difficult to tender his resignation to John Paul II, who had decided against resigning as pope.  Tendering it to Benedict, who accepted it, should have been seen as a sign of Benedict’s acceptance of this path.)

Thus, Pope Benedict XVI and Pope John Paul II reached entirely different conclusions to the same question: Should an ailing pope resign?  For John Paul, the image of the suffering, sick pope was of spiritual value to his flock; for Benedict, the job needed to be done.  Discernment is always very personal; and it is important to see how two holy men reached two entirely different decisions.  God speaks differently to different people facing the same question.  In the lives of the saints, for example, we often see how the same situation is handled differently by different saints.  When St. Francis of Assisi was facing a painful malady of the eyes, brought on, doctors thought, by excessive tears during Mass, St. Francis decided that he would continue as he had with attending Mass.  When St. Ignatius faced similar problems with his eyes, the physicians warned him, he decided to curtail his devotions, in order to have sufficient health to do his work. Both were responding to what they felt were God’s promptings in their lives.   The pope also shows great spiritual freedom in his resignation, what St. Ignatius calls a freedom from "disordered attachments."  Rare is the person today who can relinquish such power, voluntarily.

Pope Benedict XVI may likely remembered as a pope who in his relatively short pontificate, sought primarily to strengthen the orthodoxy of the church in a variety of means, who authored several important encyclicals, notable for their theological depth and appeal, and who continued a full set of public appearances, and who, despite his full schedule, published three well-received books on the life of Jesus.  Never the media superstar that his predecessor was, Pope Benedict XVI, a lifelong scholar, exuded his own brand of charisma, which came from his profound theological acumen and his personal relationship with Jesus.  Perhaps his most often neglected talent was his series of superb Angelus messages, delivered every Sunday during his public appearances in St. Peter’s square.

His most lasting legacy, I would suggest, will not be in the various “newsworthy” acts of his papacy that were highlighted in the media so often (his long negotiations with the breakaway Society of St. Pius X, his strong actions against the sexual abuse accusations made against the powerful founder of the Legion of Christ, the revised English translation of the Mass, his own response to the sexual abuse crisis, or the controversy over the comments that angered the Muslims, and so on) but something far more personal: his books on Jesus.  Far more people will most likely read those moving testaments to the person who is at the center of his life—Jesus of Nazareth—than may read all of his encyclicals combined. Others may disagree about this aspect of his pontificate, but in these books, the pope brought to bear decades of scholarship and prayer to the most important question that a Christian can ask: Who is Jesus?  This is the pope’s primary job--to introduce people to Jesus--and Pope Benedict did that exceedingly well.