Pope to Venerate the Relics of Pope St. Celestine V 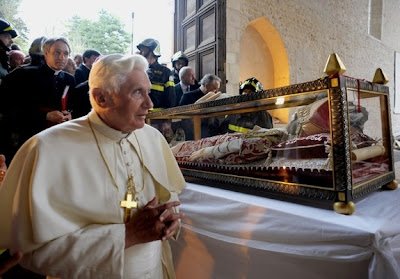 Now on the Fourth of July, he is making a second visit to  the Abruzzi region of Italy and will venerate the relics of St. Celestine V. The April 2009 earthquake devastated the region and the pope visited soon after. During that visit he not only venerated the remains of Celestine, but left there the pallium he received at the beginning of his pontificate.

Pope St. Celestine V was elected pope in 1294 after a two year conclave. He resigned after five months, was imprisoned by his successor and died 10 months later.

In accord with canon law, a pope can resign (Canon 333.2). No one expects Pope Benedict to offer his resignation at this tomb of a  pope who did resign. But a major problem still remains untouched by canon law. What happens if the pope becomes enfeebled or comatose, suffering from advanced Alzheimer’s and unable to carry out his office?

A report in this magazine entitled “Power Vacuum?” of October 12, 2009 discussed this dilemma or gap, and the need for some regulation which would enable an enfeebled pope to be replaced. Such “special laws” have been promised (Canon 335) but have never been set forth. So perhaps this would be a good occasion for the Holy Father to set forth  the regulations or procedures on what would happen if a pope were to become comatose.

Peter Schineller
Show Comments (
1
)
Comments are automatically closed two weeks after an article's initial publication. See our comments policy for more.
James Lindsay
11 years 3 months ago
I read about Celestine in a church history book "The Cardinals." He is an inspiring and holy figure. I suspect that the issue of papal incapacitation need not come up. Unlike a President, the Pope has no divisions to command. His brother bishops can do nicely in a pinch. Additionally, given the prophesies of St. Malachy and the Secret of Fatima, after this pope - who is in excellent health, there is one more and he will be killed.

I suspect it is more likely that Benedict will lessen the scope of the papacy, create more western partriarchies and seek unification with Constantinople (rather than insisting the ancient churches unify with Rome). After doing that, the "head of state" nature of the papacy will be finished.