Pope Tells Synod Fathers: Let Us Not Thwart "God's Dream" For His People 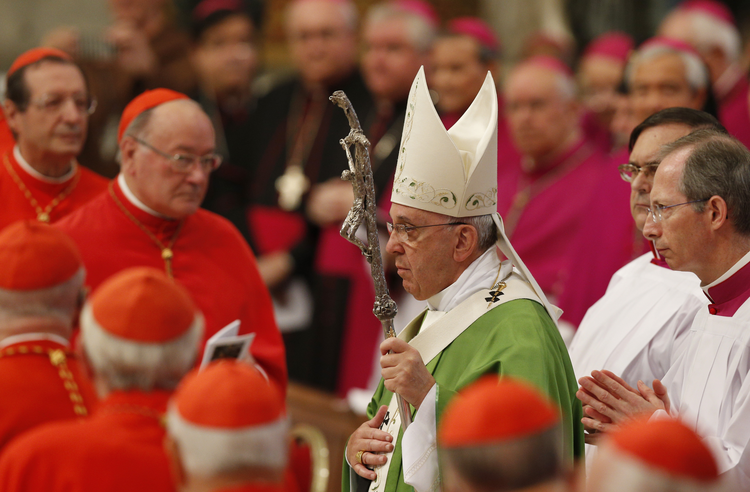 “Synod Assemblies are not meant to discuss beautiful and clever ideas; or to see who is more intelligent,” Pope Francis told the 191 synod fathers from all continents gathered with him in St Peter’s Basilica as they concelebrated mass on Sunday morning, October 5, for the opening of this crucially important synod on the family.

Synod assemblies “are meant... to help God realize his dream, his loving plan for his people,” he said.

The first Jesuit pope underlined the particular importance of this extraordinary synod on the family, which has the potential to be a major turning point for the Church, when he told them that “the Lord is asking us to care for the family, which has been from the beginning an integral part of his loving plan for humanity.”

He made clear to them that over the next two weeks, as they participate in the synod’s discussions, they could help realize “God’s dream” for his people or “thwart that dream.”

Drawing on the Scripture readings of the day, he recalled that God’s ‘dream’ is his people” which he planted in a vineyard “and nurtured with patient and faithful love, so that it can become a holy people, a people which brings forth abundant fruits of justice.”

At various stages in history, he said, “God’s dream is thwarted” by those very people to whom it has been entrusted. It has been thwarted in particular by the managerial or “ruling class,” the religious leaders, whose job is “to nurture the vineyard with freedom, creativity and hard work” and “protect it from the animals in the field.” But they fail to do their job “and think only of their own interests” and “took over the vineyard.”

Driven by “greed and pride they want to do with it as they will,” the pope remarked, “and so they prevent God from realizing his dream for the people he has chosen.”

Moving from biblical times to the present day, Pope Francis said “the temptation to greed is ever present.... greed for money and power,” and “to satisfy this greed, bad pastors lay intolerable burdens on the shoulders of others, which they themselves do not lift a finger to move.”

He reminded the synod fathers, who share very different perspectives on some of the several complex questions on the synod’s agenda,  that they too, together with him, are called to work for the Lord’s vineyard, to help realize God’s dream for his people. But he reminded them, “We are all sinners and can also be tempted to ‘take over’ the vineyard, because of that greed which is always present in us human beings.”

“God’s dream always clashes with the hypocrisy of some of his servants,” the pope stated.

Looking at the synod fathers from the lectern where he stood, Francis told them frankly, “We can ‘thwart’ God’s dream if we fail to let ourselves be guided by the Holy Spirit.”

He concluded by reminding them that it is the Holy Spirit who “gives us that wisdom which surpasses knowledge, and enables us to work generously with authentic freedom and humble creativity.”

His homily was brief, but forceful. It revealed yet again the openness of hearts and minds that Pope Francis hopes the synod fathers will have as they discuss the questions of major importance regarding the family, and how the Church is to respond to them today.