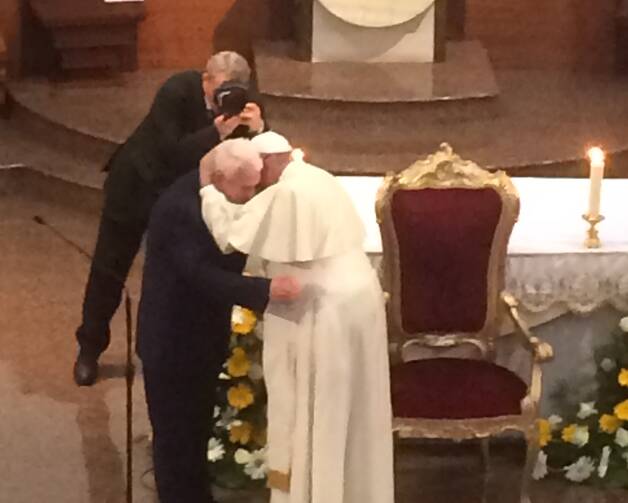 I have been on many papal trips to foreign countries over the past thirty years and have experienced some profoundly moving and faith-filled moments on several of them but I had never before seen a Pope so overcome with emotion that he wept. But that is what I witnessed on Sunday evening, September 21, in the cathedral of Tirana.

It all happened when Don Ernest Simoni, an 84 year old Franciscan priest from Albania told the story of his personal martyrdom under the brutal communist regime of Enver Hoxha. He told it in the presence of Pope Francis and a church packed with cardinals, bishops, priests, women and men religious, seminarians and members of lay Catholic movements.

Reading from a prepared text and speaking without any emotion, the elderly grey haired priest told how he was arrested on 24 December 1963, immediately after celebrating the mass of the vigil of Christmas, and how he spent the next 27 years in prison, during which he experienced all kind of suffering and torture.

He recalled that he was interrogated some months after his arrest and an officer told him, “You will be hanged as an enemy because you have told the people that we will all die for Christ if necessary.” They tortured him because they wanted him to speak out against the Church and the hierarchy, “but I would not do so,” he said with great humility. He recalled how they tied his wrists so tightly with irons that his heart stopped beating and he nearly died, “but the Lord wanted me to continue living.” They condemned him to death but the sentence was never carried out.

There was total silence in the church as he continued to recount the heroic story of his personal martyrdom, until the day he finally gained his freedom.

Don Ernest finished speaking and then turning to the Pope told him, “I pray through the Most Holy Mother of Christ that the Lord will give you life, health and strength in guiding the great flock that is the Church of Christ.”

He then went towards the Pope to kiss his hand, but as Francis got up to embrace him the old priest went down on one knee before him. Francis pulled him up, kissed his hand and embraced him for a long time, and then put his head against his and wept. The Pope turned to the altar, took off his glasses and wiped his eyes with a handkerchief.

Then, as scheduled, a second witness to the faith came forward: an 85 year old nun, Sr. Marije Kaleta, of the Stigmatine Order. She too told the story of her life and sufferings in that same era under the communists, and with the same detachment as the priest. When she finished speaking the Pope got up and embraced her too and blessed her.

Pope Francis had intended to deliver a talk from a prepared text, but having heard the life-histories of these two modern-day martyrs he decided to put is aside. Instead, he spoke off the cuff for some minutes, offering a spiritual reflection on what he had heard from these two heroic followers of Christ, and told his audience, “God is merciful and gives us consolation.”

Three hours later on the flight back to Rome, when a reporter asked what he had felt as he listened to those extraordinary testimonies, Pope Francis admitted that he had totally unprepared for all this, he had not expected it. “We were all deeply moved,” he said in a voice that still conveyed emotion.

He revealed that he was particularly touched as he listened to the old priest speaking of his own martyrdom in such a humble, detached way as if all that had happened to someone else and not to him.

The Jesuit Pope went onto reveal that before going to Tirana he had spent two months studying the history of the persecution in Albania (under the communists), “but I had not realized that this people had suffered so, so much. It was a surprise for me,” he confessed.

He recalled that when he drove from the airport to the city center that morning he was particularly impressed at seeing the portraits of forty of Albania’s martyrs, whose cause for beatification is now being examined, hanging along the main street of Tirana. “I saw that these people honor their martyrs,” he remarked with admiration. Then referring to the two martyrs who had given there testimonies, Francis said, “To listen to a martyr speak about his (her) own martyrdom is powerful indeed.”

Pope Francis came to Albania was to honor the martyrs, but he had not calculated on experiencing anything like this. Nor had I.