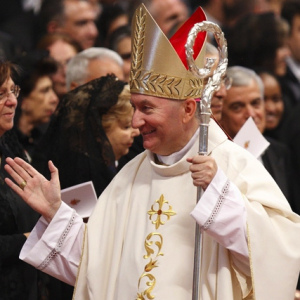 Ever since the election of Pope Francis, I’ve been eagerly waiting to hear who would be named as the Vatican Secretary of State, a position in the church that manages the internal workings of the Vatican, the appointment of new bishops, and the church’s diplomatic relations. In my previous post as president of the International Movement of Catholic Students (IMCS-Pax Romana), I had the chance to meet and work with many of the rumored candidates.

Today, I am overjoyed to hear the strong rumors that Pope Francis will name Pietro Parolin, someone who I consider to be one of the best men to work in the Vatican as the Secretary of State. I had the chance to work with the Italian Archbishop Pietro Parolin for several years on the coordination committee to plan the Forum of Catholic Inspired NGOs and was honored to be invited to attend his episcopal ordination  by Pope Benedict XVI in St. Peter’s before he was sent to serve as the Vatican Ambassador (nuncio) to Venezuela, an important and very difficult post....  Read the rest here.