Is Pope Francis a failure? Not so fast. 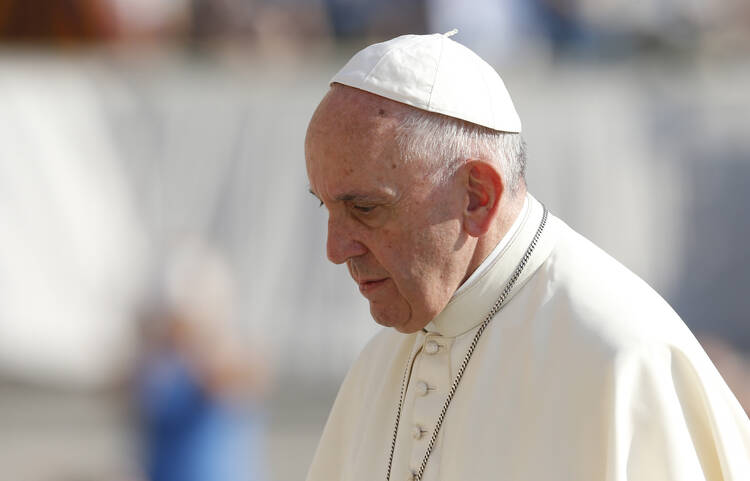 “Has Pope Francis Failed?” asked First Things literary editor Matthew Schmitz in a recent New York Times op-ed. The numbers he cites from Georgetown University’s Center for Applied Research in the Apostolate seemed to suggest “yes.” Since 2008, when Pope Benedict XVI occupied the chair of St. Peter, there has been a 10 percentage point drop in the number of American millennials that receive ashes on Ash Wednesday and a similar decline in those who make a Lenten sacrifice above and beyond giving up meat on Fridays.

There is nothing good to say about those trends; Mr. Schmitz is right that skipping the corporeal parts of worship makes us weaker. But, as a statistician, I cannot be as sure that these kinds of numbers are evidence of the weakness of Francis’ papacy.

Here’s the problem: Take a second and make a guess about how much participation in Lenten rituals has diminished for American Episcopalian or Lutheran millennials over the same period covered by CARA’s research. Ten percentage points? More? Less?

I don’t know the answer, but I would be surprised if it is only Catholics that are falling away at these rates. Millennials are secularizing rapidly. Whether Francis is doing well or poorly, relative to Benedict, a drop in religious practice is not too surprising. Any “Francis effect” winds up drowned out by the larger demographic shift away from organized religion.

What would be a better measurement of the success of a particular papacy? I needed to find an answer to that question three years ago when an atheist friend of mine bet me that Pope Francis would be bad for the American church. We needed to work out some objective way of settling the bet and we wound up agreeing to use the American Episcopalian church as a control group.

Instead of just looking at good or bad trends for Catholics, which could be the result of general trends in religiosity that have nothing to do with Pope Francis, we would score the Catholics relative to the Episcopalians, who should be subject to some of the same pressures to secularize but are less influenced by the pope. I would win the bet even if the number of Catholics were declining, as long as the decline was less dramatic than that of the Episcopalians. (We will be running the numbers next year).

I will not feel so great, though, even if I win $10 and bragging rights from my friend. Declining less rapidly is still declining. The Roman Catholic Church does not exist to be relatively more successful than other faiths, but to offer us God’s grace in the sacraments, and to prepare us to receive them. The numbers that Mr. Schmitz cites can only give us ambiguous evidence about Pope Francis, but they are definitely sobering news for the church.

Is three years of Francis’ papacy enough time to judge whether or not his approach is effective? That depends both on how effectiveness is defined and also on to what and with whom Francis is being compared.

In his recent op-ed, Matthew Schmitz acknowledges that asking whether or not Pope Francis has failed may be premature, saying, “We probably won’t have a full measure of any Francis effect until the church is run by bishops appointed by Francis and priests who adopt his pastoral approach.” Yet instead of imagining what that pastoral approach would look like writ large across the life of the church, Mr. Schmitz castigates Francis for what he sees as his disregard for the institutional church and its “settled ways,” which he attributes to Francis’ Jesuit formation and focus on “internal spiritual states over ritual observance.”

This approach is almost guaranteed to conclude that Francis has failed because it imagines his effectiveness—and the effectiveness of the church and the Gospel—too narrowly. It assumes a model of confrontation for Catholics engaging with a rapidly secularizing world and imagines success in terms of victory on that front. What a pope is supposed to be doing, in this model, is convincing more people that the church is right and that secularism is wrong, and that is how the effectiveness of both his personal witness and pastoral approach is to be judged.

But there are other ways to think about engagement with the secular world without assuming a battle in which only one side emerges as the winner. Since the first days of Francis’ papacy, he has been pursuing a course that privileges encounter and the transformation of the imagination over apologetics and explanations. Whether or not we can measure that kind of engagement—I made some suggestions in a conversation about the Francis effect that Leah Libresco convened at fivethirtyeight.com—it at least deserves to be evaluated on its own terms. While the wisdom of Francis’ approach can be debated, it should not be declared a failure because it has not been winning the arguments that it has actually been trying to avoid.

The terms of engagement Francis has opted for are exactly what he described in his speech to the cardinals before the conclave in which he was elected: a church which “evangelizes and comes out of herself” rather than “living within herself, of herself, for herself.” Mr. Schmitz thinks that those “who wish to see a stronger church may have to wait for a different kind of pope…[who] would need to speak of the way hard disciplines can lead to freedom.” He seems to be willing to give that kind of pope as much time as necessary to be effective. Indeed, his hope is a good description of how St. John Paul II and Pope Benedict XVI strengthened the church, for which we ought to remain deeply grateful. Yet even across the combined 35 years of their papacies religious practice declined at much the same rate as during the first three years of Francis’.

There is more than one way for the church to grow strong, and the disciplines that lead to engaging the world with compassion and mercy are no less challenging than the ones required to confront it and correct it. Instead of wishing for a different kind of pope, maybe we would be better off trying to look for a different kind of strength, even in that divine weakness which “is stronger than human strength” (1 Cor 1:25).