Pope Francis and the Delinquents 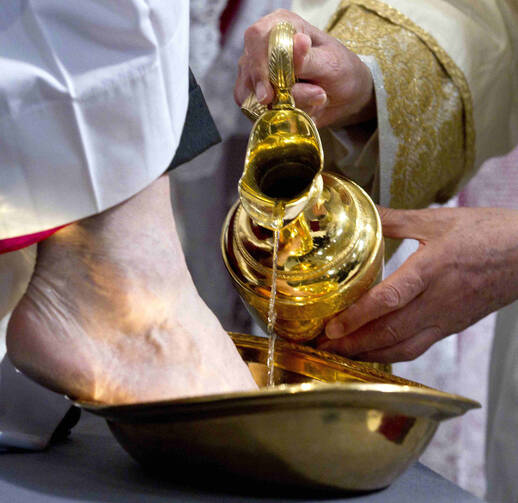 The announcement that Pope Francis will celebrate the Mass of the Last Supper in a private ceremony with youthful offenders in the Casal del Marmo Youth Jail is the latest act of exemplary leadership in his new pontificate. He and the 50 delinquents, 10 girls and 40 boys, will be joined only by his vicar for Rome and the prison chaplain.

During the mandatum, the footwashing, he will wash the feet of 12 youth. According to La Stampa’s Vatican Insider, the 12 will include participants from various nationalities and diverse religious confessions.

This continues a tradition Cardinal Bergoglio began in Buenos Aires where he was archbishop, celebrating the feast in hospitals and prisons. While the video cameras will not be there, the pope’s example will echo far louder than any sound bite or video clip. He is demonstrating that the church is for and of the poor, and that the Christian life consists in service.

The Holy Thursday ritual of footwashing has its roots in the example of Jesus as recorded in the Gospel of John (Jn 13: 1-16). It has been practiced throughout Christian history and across the Christian world among Catholic, Orthodox, Oriental, Anglican, Protestants and Anabaptist Christians. Its present place in the Catholic liturgy, following the gospel reading and replacing the homily, dates only to the Holy Week reforms of Pope Pius XII in 1955.

Holy Thursday is a feast overlaid with meaning. Especially under John Paul II, who insisted on celebrating the institution of the priesthood on this day, the three themes of the day seemed to become a tangle of meanings. Integrating the footwashing into the liturgy of the day in Pius XII’s reforms made clear the unity of a life of service with the celebration of the Eucharist. Until then, what we celebrated with processions, flowers and visits to neighboring churches was Christ present in the Eucharist. What we celebrate now is the unity of the one Body of Christ joined in mutual service and worshipped in the Eucharist. (For that reason, dropping or truncating the footwashing seems liturgically unmusical.)

The inclusiveness of the simple liturgy at Casal del Marmo—women and men, different nationalities, different religions--also shows how deeply in touch Pope Francis is with the heart of the gospel message, the all-embracing love of God. At once, all those traditionalist inhibitions about washing the feet of men or, worse, clerics only are wiped away. God in Christ embraces all.

I love chanting the Taize Ubi Caritas during the mandatum, but I still am moved to hear the English version “Where Charity and Love Prevail” and especially its quintessentially modern sixth verse:

No race or creed can love exclude,
if honored be God’s name;
Our family embraces all
whose Father is the same.

Like Jesus who gave us an example (Jn. 13: 14-15), Pope Francis among the delinquents is giving us an example of how to be church, the Body of Christ.

Drew Christiansen
Show Comments (
6
)
Comments are automatically closed two weeks after an article's initial publication. See our comments policy for more.
Bill Mazzella
9 years 8 months ago
Doce nos.!!!
Beth Cioffoletti
9 years 8 months ago
Not only does this set an example for us, it also sends a powerful message to the incarcerated: that they matter, that they are not forgotten, that the world's spiritual father chooses to honor them on this holy day. Thank you Pope Francis.
David McDonald
9 years 8 months ago
I am deeply moved by the Pope's humble and loving act of service and by his clear and visible devotion to the least of our brethren. It has been said that the moral character of a country can be reckoned quite accurately by observing how they treat their prisoners. Our Holy Father uses actions to show us the correct path, rather than a multiplicity of words or edicts or remonstrations.
Bob Baker
9 years 8 months ago
Despite the recent and somewhat carefree dismal of the new pope's actions, the laity continues to look for continuity of tradition and of being Catholic. If it was the fault of the advance man in choosing who were to have their feet washed, that's one thing. Regardless of what happened, females and Muslims were not Apostles and isn't this a large part of what we are celebrating?
Father Superior
9 years 8 months ago
Response to Bob Baker, 4/1/2013, 3:31 pm. Pope Francis' action is according to the tradition and is certainly Catholic. It was not the choice of an advance man -- the Pope asked to have included in the ceremony both male and female as well as people of other faiths. He was simply following Jesus' command at the last supper in Jn 13:12-17 and his instruction to the disciples on how to understand and interpret his actions: "Do you realize what I have done for you? You call me 'teacher' and 'master' and rightly so, for indeed I am. If I, therefore, the master and teacher, have washed your feet, you ought to wash one another's feet. I have given you a model to follow, so that as I have done for you, you should also do. Amen, amen, I say to you, no slave is greater than his master nor any messenger greater than the one who sent him. If you understand this, blessed are you if you do it." Jesus' example is not restricted to his disciples nor is their following of that example.
Tim Reidy
9 years 8 months ago

Father Superior, please use your real name in future posts as per our policy.