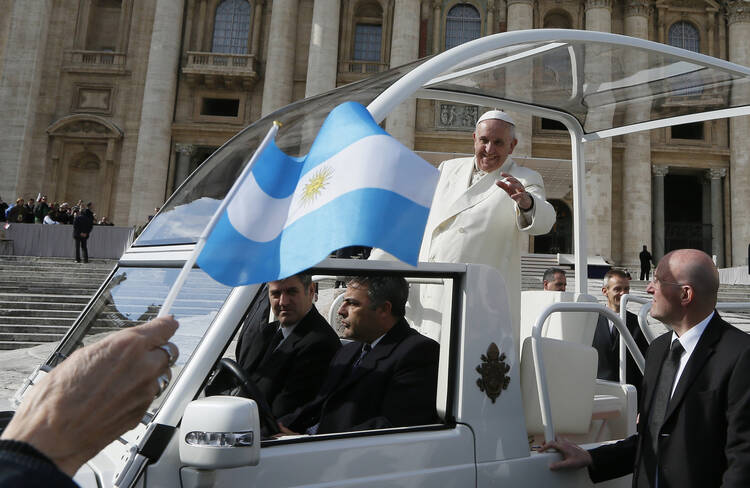 Pope Francis is well known for his early resistance to Liberation Theology. Less well known is his vocal critique of capitalism following the Argentinian debt crisis of 2002. This week, thanks to the U.S. courts, Argentina may undergo its second debt default in a decade. While its impact on the debt of nations may turn out to be less than some fear, its impact on the poor may be more damaging, undoing more than a decade of debt relief begun by Saint John Paul II in the Great Jubilee of 2000.

The structural adjustment, that is, reprioritizing public expenditures away from public services toward debt payment for international creditors, following Argentina’s first default in 2002, awakened Archbishop Jorge Bergoglio to the injustices of the international financial system. “We are tired,” he said at the time, “of systems that produce poor people so that then the Church can support them.”

The argument of the Synod of America (1997-99) and of other church documents has been that swelling debt payments impeded the development of poor nations. “It cannot be denied,” the Synod declared, “that [international debt] has contributed to creating conditions of extreme privation which constitute an urgent challenge to the conscience of humankind. . . . Relief from debt will only begin to lift the burdens of the poor. Much more will have to be done to prevent the marginalization of whole countries and regions from the global economy.”

In the current situation, more than 90% of the creditors have agreed to take “a haircut,” a reduction in the balance due them in return for payment of the interest. But a handful of “vulture” hedge funds have refused to join the settlement, and the U.S. courts have said Argentina must repay the hedge fund-speculators in full before it repays those who have agreed to the resettlement.

Debt reduction for faltering poor countries have been a policy implemented by international lenders like the International Monetary Fund as well as creditor nations in the interest of justice and the stability of the world economy. The church, with NGOs like Jubilee Justice and singer-philanthropist Bono, has persistently worked for debt relief. To date, as a result of these efforts, $30 billion of debt relief for poor countries has been achieved.

The true danger of the default forced on Argentina by the greed of the vultures and the inflexibility of the courts is that the whole fabric of debt-relief mechanisms and the climate of common-good thinking that has enabled lenders to join in this global enterprise of responsible relief for the poor will be put in question.  The greediest of speculators ought not be allowed to bring this system down nor erode the good will that made it possible.

Pope Francis told his friend Rabbi Avram Skorka, “Everyone thinks the church is against communism, and yet it is against communism as [much] as it is against the wild economic liberalism we see today . . . . No one should be dispossessed, and there is no worse dispossession—and I want to emphasize this—than not being able to earn one’s own bread, than being denied the dignity of work.” Without a retreat by the vultures or the U.S. courts, Argentina’s default is inevitable. There’s little doubt that it will invite a sharp critique from Pope Francis whose education in the failings of extreme capitalism began twelve years ago with Argentina’s first default.

Drew Christiansen, S. J., the former editor of America, is Distinguished Professor of Ethics and Global Development at Georgetown University.

Drew Christiansen
Show Comments (
3
)
Comments are automatically closed two weeks after an article's initial publication. See our comments policy for more.
John Fitzgerald
7 years 9 months ago
I am an economist by training who has spent an unusual amount of time (for a gringo) in Latin America. I also tend to favor debt relief in many circumstances. I don't know enough to comment on it's value in this situation. However, I am regularly troubled by the absence of attention or recognition to the cultural and systemic reasons underlying many countries poor economic performance. Argentina has the natural and human resources to do very well. Debt relief may be appropriate here but it will be a bandaid.
Vincent Gaitley
7 years 9 months ago
Why is it greedy to demand full payment on a debt obligation? The essence of greed is taking more than you deserve. Our courts are anything but inflexible on debt obligations, in fact, they are rather innovative and permissive--see the GM bankruptcy deal! Argentina is not poor, but it is poorly behaved. The current regime there is manipulating the situation to avoid payment, and that is different. Sovereign debt is special because the lenders can't foreclose on property and there really is not collateral held in earnest. So the word of a government is its bond. Crying poor mouth is not a repayment strategy, especially coming from a nation at peace with boundless resources. The real problem is the Argentine government and its arrogant economic claims, and its endless corruption. Please, no tears for the criminals in Argentina and don't dare condemn the banks here who bravely lent these skippers the funds to invest in their own country. Ask first, what has the Argentine government done to improve its economy? The poor (boo hoo) can not benefit if wealth is not created. Condemn the looters who took the funds. By not repaying (when they are able) they harm the poor here, too. And failing to repay or defaulting will condemn the Argentine government to isolation from capital.
Vincent Gaitley
7 years 9 months ago
As for your claim that "extreme capitalism" failed in Argentina, well, that's laughable. Argentina is only extremely corrupt, but not capitalist, not even business like. There is no rule of law there that can be counted on and the government is historically unstable. Sure, there are leeches and Peronistas, but statism rules the day, and the state is whatever junta wins at a ballot box. Bribes run the country, and personal and political ties too. I pray for the day when Argentina trusts itself enough to hold real elections, permit the loyal opposition, uphold contract law, stops blaming England over the Falklands, values its currency, and honors it own obligations. I wouldn't lend them a penny until then.