Pope Calls on Fellow Jesuits to "Row Together" With Him

Pope Calls on Fellow Jesuits to "Row Together" With Him 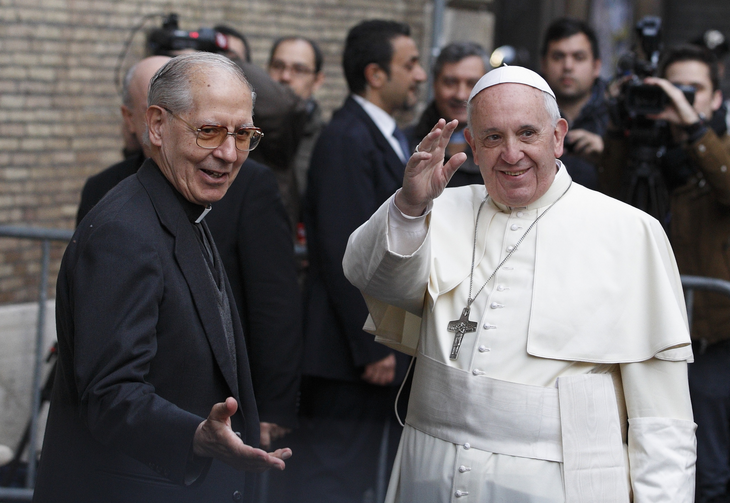 Pope Francis issued a heartfelt call to his brother Jesuits worldwide to “row together” with him, as he rows with considerable effort in ‘the barque of Peter,” and to “pray a lot,” because “the night and the powers of darkness are always close.”

He issued his call during the thanksgiving ceremony in Rome, Sept. 27, for the 200th anniversary of the restoration of the Society of Jesus (‘the Society’), as the Jesuit order is called.

“The ship of the Society has been tossed about by the waves and there’s nothing to be surprised at in this. Even the barque of Peter can be tossed about today. The night and the powers of darkness are always close. It’s tiring to row," he told the leadership of the Jesuit order, including the Father General, Adolfo Nicolas, and his council, who were present.

“The Jesuits must be expert and valiant rowers, so row!” he told them, quoting from the Bull of restoration of the Order. “Row then! Row, be strong, when there is a contrary wind. Let us row at the service of the Church. Let us row together! But as we row – everyone rowing, also the Pope in the barque of Peter – we must pray a lot: "‘Lord save us!’ ‘Lord save your people!’ The Lord will save us, even if we are men of little faith and sinners. We hope in the Lord! We hope always in the Lord!”

He was asking for their prayers and support as he strives hard to govern the universal church and reform the Roman Curia at a not very easy moment in history, on the eve of a very important synod of bishops on the family, and in a turbulent and violent world where, as he said, it seems a Third World War has already started ‘bit by bit.’

“Let us remember our history: the Society ‘was given the grace not only to believe in the Lord, but also to suffer for him,” the pope told them in his homily in the church of the Holy Name of Jesus, better known as the ‘Gesu,’ in the center of Rome where St Ignatius lived for a time and is buried.

He recalled how Father Lorenzo Ricci, the Father General of the Society “in those difficult times of persecution” in the late 1700s, had encouraged his Jesuits not to give in to a spirit of despair or victimization, or look for easy compromises. Instead, he had urged the Jesuits in those days of great suffering to “discern the will of God,” “to recognize that they were sinners and to put their trust alone in Jesus, who is their hope” and “gives them consolation,” and to know that “it is love that will judge history, and that hope, even in darkness, is greater that our expectations.”

Pope Francis recalled the suppression of the Jesuit order in Portugal, the Spanish territories, France and other places in the 17th century and how the secular powers - ‘the enemies of the Church” as John Paul II called them - succeeded in getting Pope Clement XIV to suppress the order. It only survived “under a Lutheran King” (in Prussia) and “under an Orthodox Monarch” (in Russia), he recalled.

Forty years later, on Aug. 7, 1814, Pius VII, a Benedictine pope, on his return to Rome from France where he had witnessed the French revolution and the reign of Napoleon, restored the Jesuit order “to help in an adequate way the spiritual needs of the Christian world without difference of peoples or nations.”

At the time of its suppression the Society of Jesus had 23,000 members, but when it was restored it had been reduced to a mere 600.

“During the suppression, our brother Jesuits remained fervent in the Spirit and in the service of the Lord, joyful in hope, constant in tribulation, persevering in prayer” and “this honored the Society,” the pope said in his homily at this simple, beautiful, deeply spiritual evening service of sung vespers.

The Argentine Jesuit pope recalled that when Pius VII re-established the order it was made up of “courageous and humble” filled with hope, love and apostolic creativity, and immediately became “missionary” and placed itself at the disposition of the Apostolic See. He said it began again its work of “preaching, teaching, spiritual direction, scientific research and social action, the missions and care of the poor, the suffering and the marginalized.”

Moving from the past to the present, Pope Francis praised the Jesuit order today because it is “facing with intelligence and dedication the tragic problem of the refugees and displaced persons” and “making an effort with discernment to integrate the service of faith and the promotion of justice.”

He recalled “the prophetic words” that he had heard “with my own ears” from Paul VI when he told the 32nd General Congregation of the Jesuits (1974-75): ‘Wherever in the Church, even in the most difficult and extreme situations, in the crossroads of ideologies, in the social trenches, where there has been and there is confrontation between the deepest desires of man and the perennial message of the Gospel, there you have been and there are Jesuits."

“I confirm today what he said then,” Pope Francis stated, indicating that he wanted them to continue on that road.

He recalled that in 1814, when the order was restored, they were “a small flock” but after enduring the cross they knew how to invest in the great mission of “bringing the light of the Gospel to the ends of the earth.”

“This is how we must feel today therefore: outbound, in mission,” he told those in the Gesu church in a message that was clearly destined for the more than 17,000 fellow-Jesuits worldwide. It is how he is conducting his ministry as Successor of St Peter, it is how he wants them to live too.

He concluded his homily by reminding them that “The Jesuit identity is that of a man who loves God and loves and serves his brothers, showing by example not only that in which he believes, but also that in which he hopes, and who is the One in whom he has put his trust.”

After he had finished speaking, all the Jesuits, led by the Father General, renewed their promise of commitment to the mission and to the Successor of Peter. Fr. Nicolas then brought an urn with incense and their commitment to the pope who placed it in front of the image of the Madonna della Strada (Our Lady of the Way), the patroness of the Society. Then all present sang the Te Deum, the church’s solemn hymn of thanksgiving to God.

At the end of the service, Father Nicolàs thanked the Pope – whom he called “Brother Francis” – for being with them for this milestone celebration and then the two men, who have known each other for many decades, warmly embraced.

Show Comments (
1
)
Comments are automatically closed two weeks after an article's initial publication. See our comments policy for more.
John Fitzgerald
5 years 11 months ago
This is the greatest opportunity in its history for the Society, as a united force, to carry the Gospel. I hope you guys really take it.
Advertisement