On the Plane from Tel Aviv, Pope Reveals He Will Soon Meet with Victims of Abuse 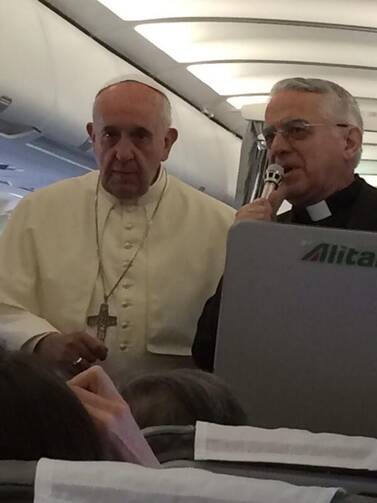 Francis, the tireless Pope, responding to questions from reporters on the flight back to Rome from Tel Aviv, May 26, announced that he will meet 8 victims of abuse by clergy in early June, and revealed that three bishops are currently under investigation for this crime.

He clarified that the early June meeting between Israeli and Palestinian Presidents is an encounter for prayer, and said Benedict XVI’s resignation has made it possible for his successors to follow suit. He announced that he will visit Sri Lanka and the Philippines in January 2015. He also spoke about recent financial scandals in the Vatican, the possibility of the Catholic Church changing the law on celibacy, and the question of communion for the divorced and remarried. And he said he talked with Patriarch Bartholomew about producing together a text on ecology.

It was an amazing tour de force after three action-packed days in the Holy Land. He answered questions for 46 minutes on the El Al plane, and in the end had to be prevailed upon to stop so as to allow the flight attendants to serve dinner to those accompanying him from the Vatican as well as to the 73 reporters aboard the El Al flight.

On the question of abuse, Francis confirmed that he would pursue “a zero tolerance” approach here, and stated clearly that there would be no “privileged persons” when it comes to dealing with those who had committed this most grave crime. “There will not be any Daddy’s boys.” Three bishops are now being investigated, he said. He revealed that he will celebrate mass, June 6 or 7, in the chapel of the Santa Marta Vatican guest house where he lives, for 8 victims from different countries who were abused by clergy. He said he will meet with them afterwards. Cardinal Sean O’Malley is involved in this initiative, he said.

Asked about countries that deny religious freedom and freedom of expression to their people, Pope Francis said “some states exercise control while others adopt measures that end up in real persecution.” Some countries do not allow believers to wear a cross, carry a bible, or teach catechism to children. He said there are more Christian martyrs today than in the early period of the Church.

Speaking about his invitation to the Presidents of Israel and Palestine to join him in the Vatican to pray for peace, Francis clarified that it will be a meeting for prayer not for mediation. He would join the two Presidents for prayer because “I believe prayer is important, prayer can help.” A Rabbi and a Muslim will join them too, he said, and the Custodian of the Holy Land would help organize the event.

Queried about the future status of Jerusalem, Francis restated the Holy See’s position regarding its religious importance for the three monotheistic religions (and the right of access to the Holy places), and said “there are many proposals” including the city, including that one part could be the capital for one state, and the other for another state. He made clear however that the status of Jerusalem is a matter that has to be resolved in the peace negotiations. He declared himself incompetent to say what should happen, except to insist that this issue should be addressed in the peace negotiations in a spirit of “brotherhood and mutual trust.” It requires courage, he added. “I pray the Lord that these two Presidents will have the courage to go forward. I only say that Jerusalem may be a city of peace of the three religions.”

Questioned about his relationship with the Orthodox, Francis revealed that he had discussed the upcoming Pan-Orthodox Council with the ecumenical Patriarch, Bartholomew 1, and the possibility of agreeing with them a common date for Easter. He confided that he and Bartholomew “speak together as brothers; we wish each other well.” He revealed that they shared their problems in governing, and “We talked a lot about ecology and of doing something together on this problem.” It is known that Francis is working on what may become an encyclical on the environment, following his discussion with the Patriarch, could it be that they will write this together?

When asked whether the Catholic Church might change the law on celibacy, Francis said “I appreciate it very much and believe that it is a gift for the Church. But it is not a dogma, and the door is always open.” He drew attention to the fact that there are already married priests in the Catholic Church, in Eastern rite Churches.

One reporter asked him whether he might resign like Benedict XVI if he found that he no longer had the strength to do the job, Francis responded: “I would do what the Lord tells me I should do: I would pray and seek the will of God.” He does not consider Benedict XVI’s resignation as a unique case: “I believe that he is an institution. Seventy years ago we did not have emeritus bishops, today we have many....I believe we should see Benedict as an institution, he opened a door, that of the emeritus popes. God knows if we will have more.”

Among the many questions posed to Francis, one related to a number of recent ‘scandals in the Vatican’ involving money. Three were mentioned: a 15 million euro (US$ 20 million) loan given through the IOR (The Institute for the Works of Religion, misnamed ‘The Vatican Bank’) involving Cardinal Bertone; a costly banquet held on Vatican territory on the day of the canonization of the two Popes; and the former Secretary of State’s controversial new, very large apartment.

Francis began by recalling that Jesus had told us that we will always have scandals. The problem is to avoid that other scandals can happen. For this reason, he said, he has established the new Secretariat for the Economy, headed by Cardinal Pell. “This will help to carry forward the reform. But the reforms have to be ongoing. The Church has always to be reformed. We have to be attentive in carrying out the reforms.” Significantly he never mentioned Bertone’s name, but he did reveal that an investigation is under way regarding the loan, and even suggested the charge might be true, but there is nothing definite yet. He pointed out, however, that 1,600 accounts at the IOR have been closed over the past year.

Commenting on the high rate of youth unemployment, Francis said we’re in a world economy where money is at the center, not the human person. We have a throwaway culture, so couples don't have children. The birthrate is very low in several European countries. Today young people are being discarded he said, and pointed to high unemployment rates for young people in Italy -around 40%, and Spain -50%. “This means a whole generation doesn't study and doesn't work. This is most serious.” This economy kills, he stated, and referred to what he had said in the Apostolic Exhortation, “The Joy of the Gospel,” which is the programmatic document of his papacy.

In response to a question regarding the synod and the divorced and remarried, the Argentinean Pope explained that “the synod is about the family, the problems of the family and its riches, and the actual situation.” The family is in crisis, he stated. He recalled that Cardinal Kasper’s presentation to the Consistory of cardinals on this topic last February “contained five chapters, four of which focused on the beautiful things about the family and their theological foundation, while the fifth was on the pastoral problem of separations, the nullity of marriages and here the theme of communion for the divorced in second marriages arose.” Francis said he did not like the fact that many people, also church people, have said that the synod is being held so as to give communion to the divorced and remarried, “as if everything were reduced to casuistry.”

Asked whether he would beatify Pope Pius XII, Francis declared that there is not yet the required miracle for that to happen.

As for the Reform of the Roman Curia, he said “we are at a good point.” The entire Curia has been consulted, studies are under way with a view to having a lighter organization, for example, through a process of merging Vatican offices, and cost saving. He gave no details as to what structural changes might accord, although rumors abound. He announced that his Council of Cardinal Advisors will meet again at the end of September. He concluded by saying, “The path of persuasion is very important. Some people do not see things clearly. But I am happy.”

Throughout the press conference, Francis responded with candor and considerable humor, while navigating the pitfalls with considerable skill. The journalists applauded warmly when he finished speaking, as they had done earlier when he insisted on continuing his conversation with them after the scheduled 30 minutes had passed. Reporters greatly appreciate his generosity in allocating so much time to them, particularly after a grueling three days visit in the Holy Land, under a burning sun, that tested their resilience and sapped their energies.

Note: The full text of the Pope’s interview will be published by the Vatican in the coming days.