In Kenya, joining Pope Francis on a pilgrimage of hope 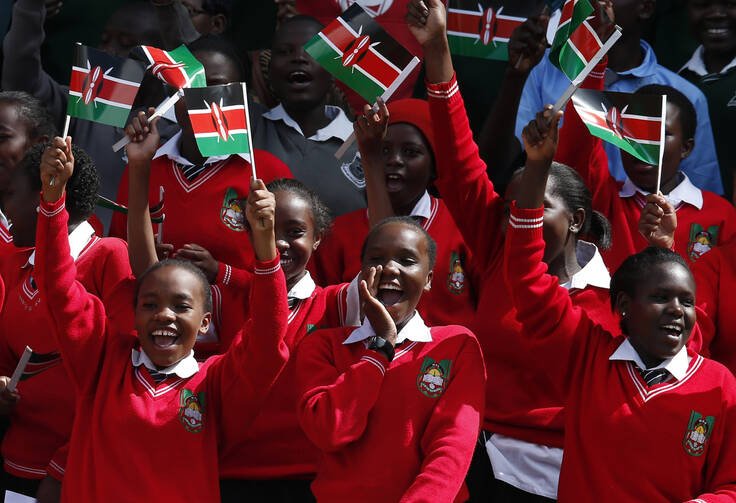 From the moment his plane landed in Nairobi, Pope Francis was greeted by thousands of pilgrims everywhere he went. Men, women and children traveled from all over Kenya as well as from neighboring countries to participate in this historic papal visit. Personally, I had the privilege of attending the meeting with youth at Kasarani Stadium on Nov. 27. It is difficult to capture the experience in words—the overwhelming energy of the crowd, tens of thousands of young people of faith singing, dancing, cheering and praying. Joy poured out and was contagious as many Kenyan bishops and even President Kenyatta joined in celebratory dancing as we anticipated the pope’s arrival. When his popemobile entered the stadium, there was a combination of awe and intimacy that is difficult to articulate. For me, it was a glimpse at the pilgrim church and the acceptance of a deeply personal invitation to join Papa Francesco on this, his pilgrimage of hope.

Anyone who attended a papal event began the journey long before sunrise. My own journey to Kasarani stadium began at 3 a.m., and by 4:30 a.m. we were already there anxiously awaiting the Holy Father, who would not arrive until 10:44. The process, the preparation and even the wait are all key components for pilgrimage. The many hours of anticipation may have been necessary for crowd control and security; but perhaps they served a greater purpose for those of us there. In the prayer and waiting, the pilgrim finds the space to reflect upon why we were there and where we, as a people, are going. We were a people on pilgrimage but it was not really a pilgrimage to see the pope. It was instead an invitation, an opportunity to participate in his pilgrimage and witness of a pilgrim church.

Responding to the young woman and man who spoke, Pope Francis began by singling out tribalism as a source of conflict, division and violence. As everyone joined hands to symbolize that we are one people, Pope Francis explained, “it’s an expression of our desire, our hearts, and this tribalism is a work we must carry out every day.... You have to listen to others, it’s a work of opening your heart.”

In August, I arrived at Hekima University College’s Institute for Peace Studies and International Relations here in Nairobi as a Fulbright scholar. As a moral theologian, I came to lecture on religion and peace building, but I have learned as much from my students as I can hope to have taught them. My students inspire me through their hope, determination and deep commitment to peace. Catholic, Christian and Muslim, we come together each week in openness and humility determined to ask hard questions and realistically examine the possibilities and challenges of building a just peace.

Humility, openness and listening are necessary to be a pilgrim. Theologian William Cavanaugh explains, “the pilgrim seeks to transgress all artificial borders that impede the quest for communion with God and other people.” Breaking down barriers and building a culture of solidarity is a recurring theme for the Holy Father. It links together his words to the United Nations in Nairobi, to the people of Kangemi and to the youth. This same message of unity and love is the bedrock of his message in Uganda and the Central African Republic. In the CAR, he identified himself as a pilgrim of peace; but he is also a pilgrim of hope.

Hope was both the gift and challenge in Kasarani stadium. Nothing can separate us from the love of God. This is the promise and the joy of the Gospel. This is the good news. The young men and women of Kenya, like their counterparts in every nation, face significant challenges and burdens. Corruption, environmental degradation, poverty and violence are all overwhelming and complex. It is easy to look upon them and despair. His answer: “When you don’t understand something, when desperation hits you then look at the cross. That is the great failure of God, that is the destruction of God, and it’s a challenge to our faith. And this is hope, because history did not end in that failure. Rather it’s in the resurrection of Christ that renewed all of us.” It is for this reason, he shared that he always carries with him the way of the cross.

For me, it is most fitting that this visit occurred as Christians begin Advent, the season of preparation for and anticipation of God becoming human, God entering into the chaos of humanity. The beauty of this visit culminated in Pope Francis’ inaugurating the year of mercy not from a position of triumph and power in Rome, but in the CAR, amidst the chaos of conflict, poverty and humility. At Kasarani, I watched as Pope Francis blessed countless seedlings that will be planted all over Kenya to commemorate his visit and as a concrete reflection upon “Laudato Si’.” I was lucky enough to bring one seedling back to Hekima to serve as a constant reminder of the hope and challenge of Pope Francis’ visit.

Planting trees is not only a practical step in fighting climate change, as Pope Francis explained at the United Nations in Nairobi: “Planting a tree is also an incentive to keep trusting, hoping and above all working in practice to reverse all those situations of injustice and deterioration which we currently experience.” Ultimately, as a pilgrim people, especially during Advent, we prepare ourselves to keep trusting, hoping and working to bring about greater justice and peace in our world. Christmas reminds us that we are not alone. God is with us in our deepest vulnerability and reminds us that as things come full circle—from Christmas to Easter—that mercy wins.

Meghan J. Clark is currently a Fulbright Scholar and Visiting Lecturer at Hekima Institute for Peace Studies and International Relations in Nairobi and an assistant professor of moral theology at St. John’s University, Queens, N.Y.