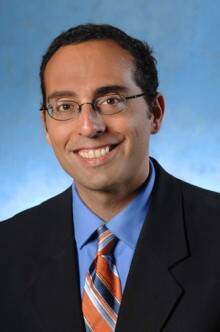 NEW YORK, NY – The boards of trustees of America Media and of the Saint Thomas More Chapel and Center at Yale University are pleased to announce that Philip J. Metres III has been selected as the inaugural recipient of the George W. Hunt, S.J. Prize for Excellence in Journalism, Arts & Letters.

Dr. Metres is a professor of English at John Carroll University in Cleveland, Ohio. A poet and essayist, his writing – which has appeared widely, including in Best American Poetry – has been called “beautiful, powerful, magnetically original.” Lawrence Joseph, professor at Saint John’s University, has written that “Philip Metres’s poetry speaks to us all, in ways critical, vital, profound, and brilliant.” His poems have been translated into Arabic, Polish, Russian and Tamil.

Dr. Metres graduated from Holy Cross College in 1992, and spent the following year in Russia on a Thomas J. Watson Fellowship, pursuing an independent project called “Contemporary Russian Poetry and Its Response to Historical Change.” Since receiving a Ph.D. in English and an M.F.A. in creative writing from Indiana University in 2001, Metres has written a number of books, including Sand Opera (2015), A Concordance of Leaves (2013), abu ghraib arias (2011), Ode to Oil (2011), To See the Earth  (Cleveland State 2008), Behind the Lines: War Resistance Poetry on the American Homefront since 1941 (University of Iowa Press, 2007), Instants (a chapbook, Ugly Duckling Presse, 2006), Primer for Non-Native Speakers (a chapbook, Kent State 2004), Catalogue of Comedic Novelties: Selected Poems of Lev Rubinstein (Ugly Duckling 2004) and A Kindred Orphanhood: Selected Poems of Sergey Gandlevsky (Zephyr 2003).

“Philip Metres’ work encapsulates both the breadth and spirit of the Hunt Prize,” said Father Matt Malone, S.J., President and Editor in Chief of America Media. “His poetry, literature and translations are infused with a deep sense of justice and concern for others, the kind of graceful sympathy that characterized George Hunt’s writing.”

Dr. Metres will be awarded a $25,000 prize at a reception to be held at the Saint Thomas More Chapel and Center in September, where Professor Metres will also deliver an original lecture that will be published as the cover story in a subsequent issue of America. “We are very pleased with the decision of the selection committee,” said Father Robert Beloin, chaplain of the Thomas More Chapel and Center. “Professor Metres is a shining example of the power of good writing to change minds and hearts.”

The George W. Hunt, S.J. Prize for Excellence in Journalism, Arts & Letters, was established in 2014. The Hunt Prize was made possible through the generous gift of Mr. Fay Vincent, Jr., a long-time and cherished friend of the late Fr. George Hunt, S.J., the longest-tenured Editor-in-Chief of America magazine. Mr. Vincent currently serves as a trustee on the Board of Trustees of the St. Thomas More Chapel and Center and Yale University. The Hunt Prize seeks to encourage writers under the age of 45 who employ a Catholic imagination in their writing.

About The Saint Thomas More Chapel and Center: Saint Thomas More Chapel and Center at Yale University serves the Catholic community at Yale by creating a vibrant and welcoming community through worship and service; cultivating informed faith and spirituality; engaging in reflective discourse on faith and culture; advancing the Church's mission of promoting social justice; and participating in the global Church's life and witness.

About America Media: America Media, publisher of America magazine,is the leading producer of multimedia content for thinking Catholics and those who want to know what Catholics are thinking. It provides a smart Catholic take on religion, politics and culture. Founded in 1909 by the Jesuit order as America magazine, it now offers content on multiple print and digital platforms including –America Digital, America Radio, America Films and America P2P (events). http://www.americamedia.org

The Editors
Show Comments (
1
)
Comments are automatically closed two weeks after an article's initial publication. See our comments policy for more.
Donald Sprague
6 years 6 months ago
What a marvelous choice. Phil's talent, exceptional insight, and scholarly nature were very much evident when he was a high school student at Loyola Academy in Wilmette, Illinois. Phil was a member of the inaugural group of Dumbach Scholars in whose summer reading discussions his insights set him apart. Bravo, Phil!