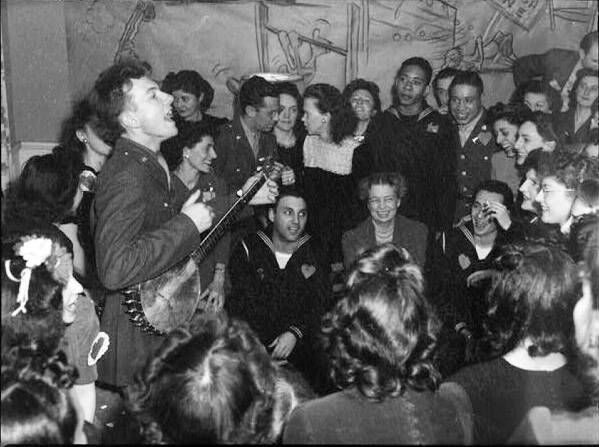 But beyond his social and cultural influence, what I’ve always admired about Seeger was his gentle, sincere presence. In person he came across as a calm, kindly grandfather, friendly and welcoming to just about everyone who approached him. He had a grace and lightness about him that served him well in moments of extreme duress, whether that was testifying—or more to the point—refusing to testify during the House Un-American Activities Committee or dealing with an unruly crowd at Newport when Dylan “went electric.” (Ok, I guess he did threaten to take an axe to the power line during Dylan’s performance. That just proves he was human—and he couldn’t make out the lyrics to a distorted “Maggie’s Farm.”)

Despite all the troubles he witnessed, the struggles he personally faced—having the temerity to fall in love and marry Toshi Ohta, a Japanese-American woman, during the war; dodging taunts and rocks in Peekskill; the blacklist; fighting for civil rights; crossing the big muddy of Vietnam—he never succumbed to cynicism or despair. I guess there is no dark side to a banjo. Perhaps 70 years of marriage and family life—mostly kept out of the limelight--helped too.

Seeger, of course, will be remembered as a songwriter and folk-singer, but I think one of his best performances had nothing to do with music, though he threatened to break into song once or twice. Called before HUAC in 1955, Seeger didn’t “take the Fifth,” as many had before him, he merely emphasized the relevance of the First when he declined to discuss his beliefs, his past, his friends or his associations with inquiring members of Congress.

Here is a remarkable, memorable exchange from his testimony before HUAC:

[Frank S. Tavenner, Jr., HUAC Counsel]: What is your profession or occupation?

MR. SEEGER: Well, I have worked at many things, and my main profession is a student of American folklore, and I make my living as a banjo picker--sort of damning, in some people's opinion.

MR. TAVENNER: The Committee has information obtained in part from the Daily Worker indicating that, over a period of time, especially since December of 1945, you took part in numerous entertainment features. I have before me a photostatic copy of the June 20, 1947, issue of the Daily Worker. In a column entitled "What's On" appears this advertisement: "Tonight-Bronx, hear Peter Seeger and his guitar, at Allerton Section housewarming." May I ask you whether or not the Allerton Section was a section of the Communist Party?

MR. SEEGER: Sir, I refuse to answer that question whether it was a quote from the New York Times or the Vegetarian Journal.

MR. TAVENNER: I don't believe there is any more authoritative document in regard to the Communist Party than its official organ, the Daily Worker.

MR. [Gordon] SCHERER: He hasn't answered the question, and he merely said he wouldn't answer whether the article appeared in the New York Times or some other magazine. I ask you to direct the witness to answer the question.

CHAIRMAN [Francis] WALTER: I direct you to answer.

CHAIRMAN WALTER: You have only been asked one question, so far.

MR. SEEGER: I am not going to answer any questions as to my association, my philosophical or religious beliefs or my political beliefs, or how I voted in any election, or any of these private affairs. I think these are very improper questions for any American to be asked, especially under such compulsion as this. I would be very glad to tell you my life if you want to hear of it.

MR. TAVENNER: Has the witness declined to answer this specific question?

CHAIRMAN WALTER: He said that he is not going to answer any questions, any names or things.

MR. SCHERER: He was directed to answer the question.

MR. TAVENNER: I have before me a photostatic copy of the April 30, 1948, issue of the Daily Worker which carries under the same title of "What's On," an advertisement of a "May Day Rally: For Peace, Security and Democracy." The advertisement states: "Are you in a fighting mood? Then attend the May Day rally." Expert speakers are stated to be slated for the program, and then follows a statement, "Entertainment by Pete Seeger." At the bottom appears this: "Auspices Essex County Communist Party," and at the top, "Tonight, Newark, N.J." Did you lend your talent to the Essex County Communist Party on the occasion indicated by this article from the Daily Worker?

MR. SEEGER: Mr. Walter, I believe I have already answered this question, and the same answer.

CHAIRMAN WALTER: The same answer. In other words, you mean that you decline to answer because of the reasons stated before?

CHAIRMAN WALTER: What is your answer?

CHAIRMAN WALTER: What is your answer?

MR. SEEGER: I will tell you what my answer is.

I feel that in my whole life I have never done anything of any conspiratorial nature and I resent very much and very deeply the implication of being called before this Committee that in some way because my opinions may be different from yours, or yours, Mr. Willis, or yours, Mr. Scherer, that I am any less of an American than anybody else. I love my country very deeply, sir.

CHAIRMAN WALTER: Why don't you make a little contribution toward preserving its institutions?

MR. SEEGER: I feel that my whole life is a contribution. That is why I would like to tell you about it.

CHAIRMAN WALTER: I don't want to hear about it….

Mr. TAVENNER: It is a fact that he so testified. I want to know whether or not you were engaged in a similar type of service to the Communist Party in entertaining at these features.

Seeger would be indicted and convicted for contempt of Congress because of his refusal to cooperate. The case was dismissed on a technicality in 1962. As the questions continued about his music and his performances, Seeger offered to sing some of his songs, even though he didn’t have his banjo with him (!), to the committee since they seemed so interested in discerning their “intent.” Seeger thought hearing them out loud would be the only way to do the job right. They did not take him up on the offer. Their loss.

Kevin Clarke
@clarkeatamericaclarke@americamagazine.org
Show Comments (
2
)
Comments are automatically closed two weeks after an article's initial publication. See our comments policy for more.
Stanley Kopacz
7 years 10 months ago
The man's music, voice and performances were a part of the American cosmos. I would imagine he would get into trouble, no matter the country or political system in which he found himself, except maybe the Kingdom of God. Having him around my whole life will only make me miss him more.
Vince Killoran
7 years 10 months ago
Stanley's right. I wish Pete had made it to 100 years old!