Peekskill to Paris: A sister's local perspective on the global climate change conference 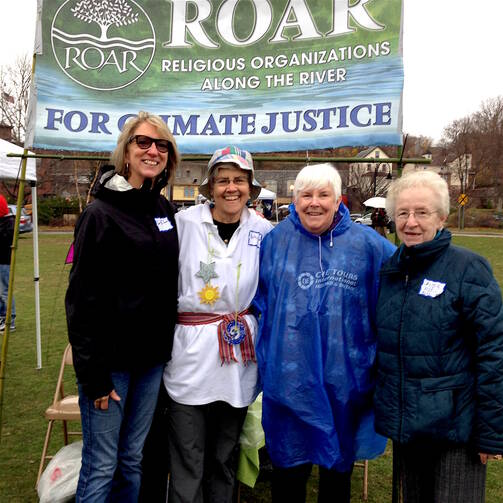 The 2015 United Nations Climate Change Conference ends tomorrow, and I am fixed on Paris and all it holds, both in peril and in promise.

In anticipation of the climate conference, or COP 21, I, along with my fellow Dominican Sisters of Hope, participated in a countywide climate rally, “Peekskill to Paris,” which our community co-sponsored. On the Saturday after Thanksgiving, we—the residents of Westchester County, parents, grandparents, nuns, writers, artists, environmentalists, high school students and octogenarians—gathered to answer the call that was left lingering after last year’s People’s Climate March in New York City: “What can we do?”

In the months of planning leading up to the rally, organizer Lisa Moir insisted that even though the facts about climate justice are grim, we couldn't be all “gloom and doom.”

“This has to be a fun celebration,” she told us. “We’re celebrating working together for the sake of the planet.” Her words gave us a resiliency we might not have had otherwise.

After educating ourselves about the dangers of a carbon-addicted world and awakening to a related local issue—the construction of the Algonquin natural gas pipeline—our work became urgent. The pipeline is to be built a mere 100 feet from Indian Point Nuclear Facility. It poses major threats by sending pressurized gas through at high pressure points only 400 feet from an elementary school. The natural gas is brought to us from fracking states and is headed for Boston and Rhode Island, neither of which will use the fuel; it is earmarked for export.

Our rally was intended to draw attention to the pipeline while supporting the international climate change summit, taking place from Nov. 30 to Dec. 11. As we gathered in Peekskill to speak the truth, share support and call for attention to the threat of a warming planet, our hopes rested on the gathered delegates from many countries gathered in Paris pledging to limit carbon emissions.

Part of the Dominican Sisters of Hope mission is our stance “in communion with all creation.” Too long have we as a people and nation treated our earth as an object to be used and abused. Through prayer, contemplation, readings, workshops and everyday life, we Dominican Sisters of Hope and others have grown in awareness and deep understanding that Earth is not an object but, rather, a sacred subject, worth relating to as a teacher, mentor and healer. So, too, Earth’s inhabitants, all of us, are sacred subjects—from bees to buffalos, soil to sun, and out to the universe, stars and constellations. As women of hope, we are called to be in relationship with the natural world and all her inhabitants. So, when one suffers, we suffer.

The poet John Soos writes, “to be of the Earth, is to know the love of being food for someone.”We ask ourselves, “How can we be food for a warming planet?” It is by living the Gospel, by daring to lend our presence and our voice of hope among all creatures, supporting the effort to protect our common home in every way we can.

This sentiment culminated at the “Peekskill to Paris” rally. The Dominican Sisters of Hope were among a long list of sponsors of the event, which included speakers ranging from politicians to filmmakers, who took the stage to voice their support. Musicians played sets in between the speakers, starting with a 16-year-old girl who began the rally with a song.

Yet, my most touching memories of the rally does not only focus on the center stage, but on what I call “icons,” or snapshots, of hope in the crowd. Throughout the program, a couple, friends I know from our Mariandale Retreat and Conference Center, stood on the sidelines: the woman was on time to the rally but her husband arrived late because he had gone to Long Island to pick up his siblings, both of whom have special needs. As he stood with them, holding a pink umbrella overhead to shield them from the rain, all three wore big smiles. Looking toward them, I captured a snapshot of hope.

When I was introduced to this friend’s siblings, I reflected on how the whole rally was for them. Though they might not understand it, our standing in solidarity for climate justice is for them.

The following evening, we held a climate and pipeline prayer vigil at the riverside. Participants carried candles, an Earth flag and glass bowls of soil, water and fresh vegetables. In the cold we prayed, sang and imagined what it is to be one with the world. I read the John Soos poem, “To Be of Earth”:

It was appropriate for these weeks of Advent that the rally focused on hope. Here we were, not gathered to spread bad news or appoint blame, but to seek the light of awareness together. And now, while offering prayers for everyone at the summit in Paris, we move forward in awareness. It is time for all of us everywhere to wake up from false security that someone else is taking care of things. In “Laudato Si’,” Pope Francis invites us to recognize Earth as our common home. It is up to every one of us to love our Earth and to recognize that She is us, all of us.

Earth and all of her inhabitants, not only women, children and men from every culture, religion and economic background, but also all the animals, organisms, the water, soil and air we breathe and the sun, moon, stars and constellations. We are all here through the grace of the Holy One, gracious God of the Universe, Creator, Redeemer and Sanctifier who set in motion this wondrous mystery; we are called to be one with one another and all creation.

We were one rally in a small town recognizing issues both global and local. We take heart from victories elsewhere and realize that a victory in this part of our common home is also possible.

In this light, it is only natural for hope to abound. We are not waiting silently for change; we are making it, together. We are the ones we have been waiting for.

Bette Ann Jaster, O.P., is a Dominican Sister of Hope. The Dominican Sisters were one of the co-sponsors of the Peeskill to Paris Rally. Find more of Sister Jaster's writing at www.ophope.org