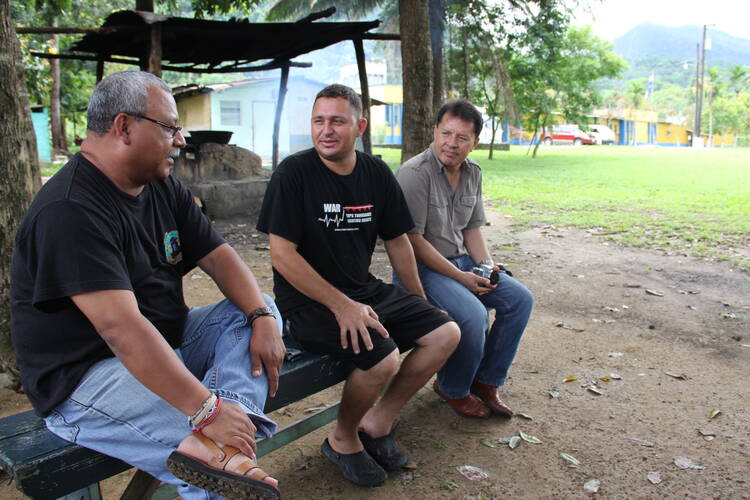 The setting was informal: Ismael Moreno Coto, S.J., known as “Padre Melo,” wore shorts and sandals and sat on a couch in the living room of his Jesuit community. Surrounded by friends, coworkers and visitors from two U.S. delegations, he spoke into his laptop computer. Yet the impact was undeniable: Padre Melo was broadcasting his nightly radio program, “America Libre”; his voice and message were reaching 1.5 million Hondurans through the airwaves of Radio Progreso, a Jesuit-sponsored communications apostolate.

During this broadcast, Padre Melo told the story Inti-Illimani, a Chilean folk music group who were essentially exiled from their country and whose music was banned under the military rule of Augusto Pinochet. He interviewed Rafael García, S.J., a member of a visiting delegation (of which I also took part) and pastor of Immaculate Conception Parish in Albuquerque, N.M. Padre Melo urged community members to attend the march, Mass and celebration of the life of Jim (Padre Guadalupe) Carney, S.J, which I wrote about here. To the untrained eye, Padre Melo might have been simply enjoying food and kinship with the diverse group gathered in his home. But, in fact, this evening broadcast captured Padre Melo’s unique brand of pastoral care that he seemingly offers to every person he encounters.

Padre Melo is the director of ERIC (Equipo de Reflexión, Investigación y Comunicación), a social analysis and action center, and the aforementioned Radio Progreso. But these responsibilities do not keep him from building relationships with and offering support to a wide range of members of Honduran society. As quick with a quip or an affectionate pat on the back, Padre Melo’s pastoral ministry has helped him develop relationships with a far-reaching and varied cross section of people that at once keep him grounded in the struggles of people but also connected to leaders in Honduran society. During the delegation I experienced the work of Padre Melo in many different capacities and settings. Here are some examples:

Honduras is in dire need of strong civil society groups and organizations to counteract political and police corruption, rampant gang and drug trafficking violence, and subversion of laws and judicial systems to the interests of wealthy and powerful individuals and companies. By offering far-reaching and inclusive pastoral care to a wide range of communities, Padre Melo is sowing the seeds to grow a community of committed people capable of transforming what is often a fragmented and polarized country.

Nicholas Napolitano is provincial assistant for social ministries for the Maryland, New England and New York Provinces of the Society of Jesus.

Additional coverage of Honduras from ‘America’

Photo album from the delegation to Honduras (Sept. 8-15)