No, No, No...The Short Life and Tragic Death of Amy Winehouse

No, No, No...The Short Life and Tragic Death of Amy Winehouse 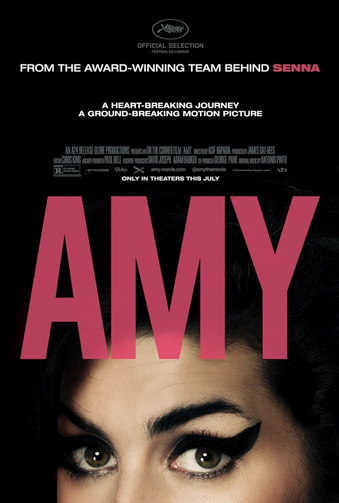 It was early March in 2007 when I first heard it. I was driving a rented car from the L.A. Religious Education Congress in Anaheim to visit friends in Los Angeles and a song came on the radio that sounded like a long lost gem from a mysterious 60s girl group. The sound and feel were as familiar as a classic Motown record but the vibe and lyric were definitely 21st Century. The song was Amy Winehouse's "Rehab" and I was so floored by it that I immediately called a friend to ask if she knew anything about it.

When the London-born singer/songwriter died four years later at age 27 from alcohol poisoning, "Rehab" went from being an attitude-drenched, retro R&B anthem to a musical cautionary tale. With the release of the new documentary "Amy" this past weekend the details and characters behind that tale are on full display.

While the film's poster declares it "A Heart-Breaking Journey" and "A Ground-Breaking Motion Picture" that is only partially true; unfortunately, the phrase "Tragically All-Too-Common" also applies. Of course there was nothing remotely common about Winehouse's talent—she may have only produced two albums but she had a voice for the ages (Tony Bennett puts her in a league with Billie Holiday and Etta James)—but her story of addiction is numbingly familiar.

"Amy" is ground breaking in the sense that Winehouse came of age during an information and technology revolution in which we incessantly record our private moments. As a result, we are the beneficiaries of footage—taken by childhood friends—of a 14-year-old Amy eating a lollipop and singing "Happy Birthday" with a couple of girlfriends. We see them around the kitchen table with a big bottle of soda laughing and joking while Amy picks out a song on guitar.

As the story continues, we see a young, unknown Amy get a recording contract and begin living on her own. We see her struggle with bulimia and drug/alcohol abuse. We see her father, Mitch, trying to shoehorn his famous daughter into his reality TV program. We also see Amy with her boyfriend/husband looking like a latter-day Sid and Nancy, dissheveled and high as they stumble through London.

Those latter images are not taken by her friends but by swarming papparazi. By that time her close childhood friends had distanced themselves due to her prodigious drug and alcohol use. Toward the end of her life, Winehouse apologized to them and tried to beat her demons—by far the most powerful moments in "Amy" are when her oldest friends talk about her addictions and how they'd been robbed of their sweet friend for so long.

Much has been made of her father disavowing the documentary director's choices but upon viewing it, Mitch Winehouse just appears to be one of many vultures looking to capitalize on his daughter's fame. He doesn't come across as the only villian by a long shot—though he is perhaps the most shameless.

Pinning her tragic death on one person is far too easy. For much of the film, Amy herself is doing her level best to court oblivion and disappear...sadly for all of us she finally succeeded.

Check out the film's trailer here: