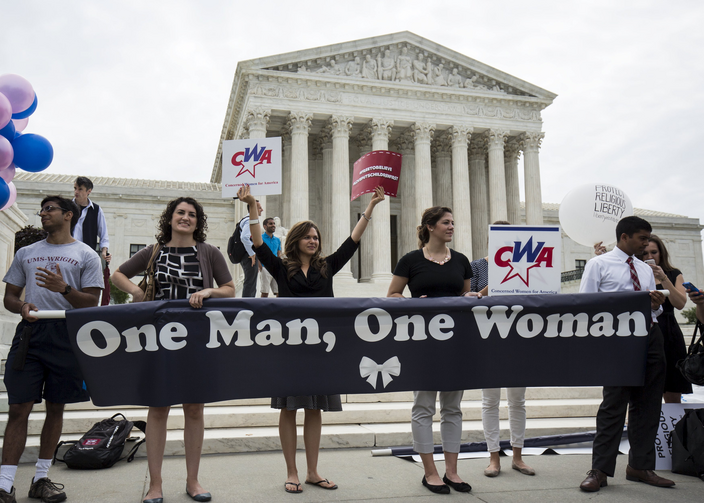 Kim Davis, a county clerk in Kentucky who is refusing to issue marriage licenses because she has religiously based objections to same-sex marriage, is learning that the First Amendment is a double-edged sword. It can be wielded to cut down both intrusions on the free exercise of religion and attempts by the government to establish religious practices.

Ms. Davis relied on the free exercise clause of the First Amendment when she stopped issuing marriage licenses after the U.S. Supreme Court ruled on June 26, 2015, that same-sex couples have a constitutionally protected right to marry. Ms. Davis and officials in other locales around the country, most notably Alabama, contend that the free exercise clause takes precedence over the Supreme Court ruling and permits them to dispense with one of their official duties, the issuance of marriage licenses to all eligible couples, if to do so conflicts with their religious beliefs.

As the federal court judge who ruled against Ms. Davis held, however, this argument simply does not comply with the U.S. constitution. “Davis is certainly free to disagree with the Court's opinion, as many Americans likely do, but that does not excuse her from complying with it.” Government employees simply may not use their official positions to impose their own religious beliefs on members of the public seeking a government service.  Ms. Davis will be in contempt of court if she persists in her refusal to issue marriage licenses to qualified couples. She could be fined, jailed, or removed from office.

Many, including some of the marriage license applicants who sued her, respect Ms. Davis for her strong beliefs. The free exercise clause protects her right to live by those beliefs and advocate for them in her private life, but the establishment clause prevents her from using her government position, and accepting a publicly funded salary, to impose her religious values on others. Ms. Davis and other similarly minded county clerks are free to resign their posts, as several of their counterparts throughout the country already have done, and avoid issuing marriage licenses against their beliefs, but the cost of taking an oath of office and cashing a government paycheck is compliance with the law.

Ellen K. Boegel
Show Comments (
2
)
Comments are automatically closed two weeks after an article's initial publication. See our comments policy for more.
Richard Booth
5 years 8 months ago
The defendant works in a civil job, which has a job description. Her religious beliefs are just that - not certainties, but beliefs and assumptions. If she wants to keep a civil job, she needs to abide by its mandates. If she does not, she should be removed, if possible, from her position, or voluntarily resign. She wants her cake and eat it, too!! She is now being discussed as a soldier for her faith; give me a break. She is merely placing what she personally (perhaps egotistically and narcissistically, we don't know that) believes and accepts as true before her sworn duty to do her job. As stated in the film "Inherit the Wind," in a different context -- "The Bible is a book, a good book, but it is not the only book."
alan macdonald
5 years 8 months ago
It seems there are only two classes of people today, the majority and the oppressed. for years, the homosexuals were discriminated against, victims of homophobia and pariahs of society, the oppressed. Now, they have full rights, can marry, enjoy sodomy, and aren't oppressed anymore. They have made Christians the new oppressed. They have become Christianphobic, and are joyous one is actually in jail. I never thought I would see a Christian put in jail in the US for exercising her beliefs. This is a very sad moment in the history of western civilization.