A New Vision for the Church 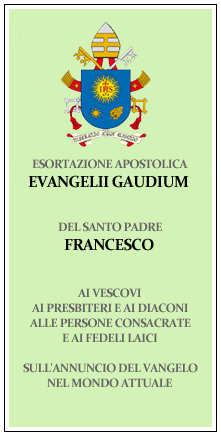 Today Pope Francis issued a bold new document—in Vatican parlance an “apostolic exhortation”—called "Evangelii Gaudium" or “The Joy of the Gospel.” In this new document, he sets out an exciting new vision of how to be a church.  In all my years as a Catholic, I cannot remember a papal document that was so thought-provoking, surprising and invigorating.  Frankly, reading it thrilled me.

To me, it seems that with each new homily, address, interview, general audience message and letter, Pope Francis is challenging himself—and us—with three questions, each of which flows naturally from the other:

First, Why not look at things from a new perspective? Second, Why not be open to doing things in a new way?  And third, Why not have a new vision for the church?

And what is Pope Francis’s vision for the church?

The document’s overall message is that Catholics should be unafraid of new ways of proclaiming the Gospel and new ways of thinking about the church.  In fact, such new ways are essential if we are to spread the Gospel at all. This may sound like boilerplate talk expected in a document on the “New Evangelization,” but it is not; for in the document Pope Francis identifies areas of petrification in the church, areas where he wants to see real change.

This is not to say that the "Evangelii Gaudium" seeks to overturn traditional church teachings. Instead it seeks to overturn the way that we have done things, and to be fearless in doing so.  For example, while he reaffirms the church’s inability to ordain women as priests, he also invites the church to think about their place in the church in new ways, to imagine “the possible role of women in decision-making in different areas of the Church’s life.”

Over and over, Pope Francis takes aim against such longstanding roadblocks to growth as “complacency,” “excessive clericalism,” and even Catholics who act like “sourpusses.”  (That’s the official English-language translation.)  About that last roadblock, he says that there are Christians whose lives are like “Lent without Easter.”

Nor does Pope Francis have patience for people who are “tempted to find excuses and complain.” Essentially, he contrasts this dourness and pessimism with the joy of living a life centered in Christ and focused on the hope of the resurrection. It is a hope-filled, positive and energetic view of the church actively engaged with the world.

"Evangelii Gaudium" is very difficult to summarize, so wide-ranging is it. Ironically, something that would at first appear to be a narrow topic—how to spread the Gospel today—offers Pope Francis the latitude to address many topics in his trademark open style. The exhortation moves easily from a discussion on joy as a requirement for evangelization, to how “personal dialogue” is needed for any authentic invitation into the faith, to the difficulty of being a church when Catholics are “warring” against one another, to the need for priests and deacons to give better homilies, to an overriding concern for the poor in the world—the last being a special concern of the pope.

To that end, some will be surprised that Pope Francis champions an idea that has lately been out of favor: the church’s “preferential option” for the poor. “God’s heart has a special place for the poor,” the Pope says.  But it is not enough simply to say that God loves the poor in a special way, and leave it at that. We must be also vigilant in our care and advocacy for them.  Everyone must do this, says the pope. “None of us can think we are exempt from concern for the poor and for social justice.”

And in case anyone misses the point, after a critique of the “idolatry of money” and an “economy of exclusion,” the pope says: “The Pope loves everyone, rich and poor alike, but he is obliged in the name of Christ to remind all that the rich must help, respect and promote the poor. I exhort you to generous solidarity and a return of economics and finance to an ethical approach which favors human beings.”

What’s more, this does not mean simply caring for the poor, it means addressing the structures that keep them poor: “The need to resolve the structural causes of poverty cannot be delayed.”

This joy and confidence needed to tackle these challenges—both inside and outside the church—is rooted and grounded in a deep relationship with Jesus Christ. Without that “personal encounter” with Jesus trying to spread the Gospel is useless.  We must have what he calls a “constantly renewed experience of savoring Christ’s friendship and his message.”

Most Catholics will, like me, read the letter with enthusiasm. But some Catholics have criticized the pope for trying to change too much in the church—even though no dogma has been altered. A few Catholics are not only beginning to critique him, but even worse, fear him. Change seems to be something to fear. As one of my Jesuit friends used to say, playfully, “I’m against change; even change for the better!” But the church must change if it is to grow—not in its core beliefs, but in the way that it lives out and shares those beliefs.

My advice to Catholics would be: Read the entire document. Take your time. Be generous with it. Let it excite you. Pray with it. And be open to the Holy Father’s call to “embark upon a new chapter of evangelization marked by this joy, while pointing out new paths for the Church’s journey in years to come.”

Finally, as Jesus said, “Fear not.”  We can change the way we do things in the church—the spread of the Gospel demands it. So be confident in God’s desire for the church to grow and change. Besides, as Francis says, “Nobody can go off to battle unless he is fully convinced of victory beforehand.”

At one point, Pope Francis uses a famous quote from Pope John XXIII, who noted at the opening of the Second Vatican Council that many doubted things could change for the better. Too many people at the time—1962—were predicting doom and disaster for the church and for the world. But Pope John disagreed. “We feel that we must disagree with those prophets of doom who are always forecasting disaster.”

"Evangelii Gaudium" is Francis’s own ringing response to prophets of doom.