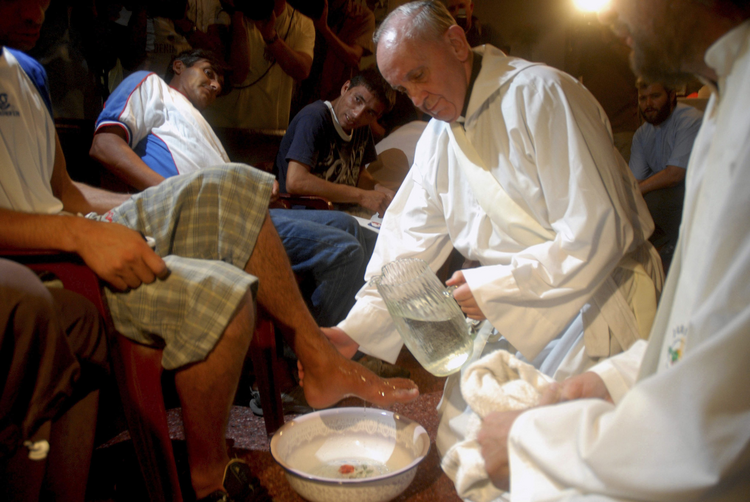 Just last week, Pope Francis decreed that the Holy Thursday foot washing ritual can include women. While his declaration is exciting and consistent with his papacy, my initial response was, “Really? We need a decree?”

I have clear childhood memories of my mother announcing the need to wear nylons on Holy Thursday so Father could not grab her for the foot washing. That was over 35 years ago.  Similar sentiments were expressed as I began work with our parish liturgy committee a decade ago. I even heard female choir members tell each other the same thing in recent years.

The question of people’s discomfort with personally participating in the foot washing ritual is a question for another day.  What these memories highlight is a clear acceptance of liturgical practice that included women. None of these women wondered about, but instead assumed the inclusion of women.  Pope Francis’s declaration simply validates and universalizes liturgical adaptation and praxis that has already been embraced in many places for many years.

Liturgical changes and adaptations are not new.  They happen for a variety of reasons.  Sometimes they are dictated by central authority, such as the standardization of the use of Latin and formulaic prayers during the 5th and 6th centuries, or our recent experience with the re-translation of the Roman Missal.  Sometimes culture drives adaptation, as evidenced in the role of dance in liturgical procession.  A desire to communicate meaning can also be a reason for change.  Recently, some couples getting married have started to include the ritual of the unity candle.  While the ritual is not part of the Rite, the symbol embodies meaning for couples who have just exchanged lifelong vows of commitment. In some places, this adaptation has been accepted as a positive development; in other places it has been discouraged, as an intrusion not fully at home in the liturgy. Overall, it illustrates the question of truly appropriate and meaningful adaptation and the importance of communal discernment. Other times, liturgical change is brought about by practical necessity.  A document such as Sunday Celebrations in the Absence of a Priest would have been unthinkable 75 years ago. In most parishes today, the lay Extraordinary Ministers of Communion significantly outnumber the ordained on any given Sunday.  Other adaptations happen to meet a clear and unique need.  Changes were made to allow parishes to offer gluten-free hosts to those who are gluten intolerant, and Children’s Liturgy of the Word, where younger members of the Parish are taken to a separate location and hear the gospel in child-friendly language, is common.

And sometimes, liturgical adaptations happen organically out of a deeper understanding of faith and the call to discipleship and service.

Vatican II did much to enrich our understanding of Church and discipleship.  As we continue to reflect on what it means to be the People of God, it should be of little surprise that our liturgical praxis reflects and embodies this more-inclusive (all-inclusive) notion of discipleship.  Liturgy is the work of the people and requires the “full, conscious and active participation” (“Sacrosanctum Concilium,” n. 14) of all the disciples. For many parishes, the call to participation necessitated changes to many liturgical practices, ensuring that all were familiar with the spoken responses, able to hear and see the presider and sing the music. Women came into the sanctuary as lectors and girls as altar servers. Lay men and women alike stepped into roles of sacristans and Extraordinary Minister of Communion.  Our physical sanctuaries changed as the communion rails came down.  The Church began to embrace the reality, however flawed and imperfectly, that we are the People of God—all of us—and liturgical praxis reflected the shift in our communal understanding of self and God.

The celebrations of the highest holy days of the liturgical year, the Triduum, are not exempt from this shift. In the Gospel that is proclaimed on Holy Thursday, Jesus tells his disciples “I have given you a model to follow, so that as I have done for you, you should also do” (Jn 13:15).    As parishes reflected on the call to discipleship and the need to empower full, conscious and active participation, it is no surprise that a powerful ritual has been adapted to be more inclusive and to embody the call to discipleship and service that is issued to all in the Gospel. Pope Francis has simply approved a reality that has already been discerned and embraced, both in the Second Vatican Council and in the local life of the church.

Laurie Ziliak is Director of Liturgy and Music for St. Mary’s Parish and a Content Passioneer for Saint Mary’s Press in Winona, MN.