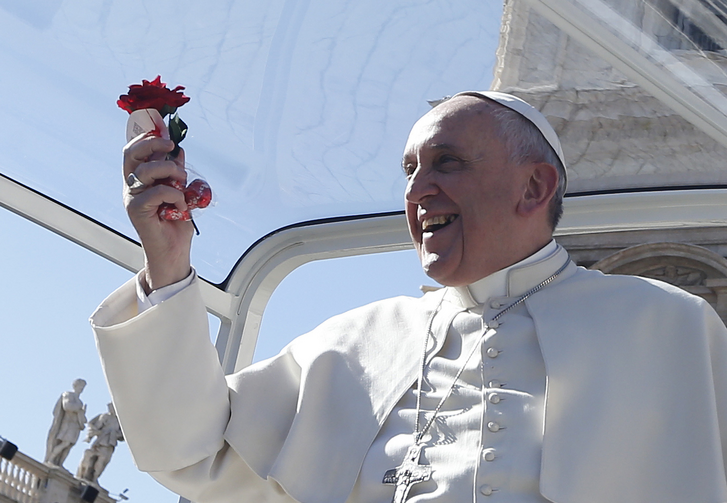 It’s time to head to Hallmark for Valentines. I’ve got my list of those to whom I want to send hearts of appreciation.

First, Pope Francis, for his constant leadership and call to clear thinking about the Gospel. Among the most recent example were his remarks on the terrorist attacks at the Paris satirical weekly, Charlie Hebdo. Pope Francis offered no defense of the violence there—there is no defense for such murderous assaults—but he also warned that provocative people should not be surprised when there is backlash. He spoke with characteristic plain talk when he noted the newspaper’s mockery of Islam and said that “in the face of an offense or a provocation … we are human.” He spoke of “prudence which is a virtue of human coexistence” and said “I cannot constantly insult, provoke a person continuously because I risk making him/her angry, and I risk receiving an unjust reaction.” He said “freedom of expression must take account of the human reality and for this reason one must be prudent.” He added that “a violent aggression is not good, it’s always bad. We all agree, but in practice let us stop a little because we are human and we risk to provoke others. For this reason freedom must be accompanied by prudence.”

A Valentine for common sense.

Valentine # 2 to Mother Clare Millea, the sister who took on the thankless job of investigating women religious in her native U.S. The assignment seemed skewed from the start but Mother Clare brought objectivity to it, won over many religious and produced a report people can work with. Those who wanted her to say the nuns were going to hell in a hand basket are disappointed, but those looking for something to work with can find satisfaction. She showed that vocation numbers are down and U.S. nuns are woefully underappreciated despite their accomplishments, even as they cope with aging members and financial crises that loom over many of them. She also forthrightly stated that religious orders need to be sure they are walking their own walk, as found in their Constitutions.

Hearts to a sister because she demonstrated that once again in the church when you want something done right, you go to a nun.

Valentine #3 to John Henry, owner of the Boston Red Sox and Boston Globe. Henry took a bold journalist step in September and established a Catholic news website, Crux that has quickly drawn readers to all that’s Catholic. The businessman saw a niche, hired the ubiquitous and knowledgeable writer John Allen to manage it and provided funds to permit insightful, global coverage of Pope Francis, the number one newsmaker in religious journalism right now. Henry moved fiercely into a once dying media beat, religion. He breathed new life into an area many believed to be on life support. Henry recognizes that coverage of the church is vital for a Catholic area such as Boston and that the church stands as a significant force in contemporary society. Covering the religion of more than 1 billion Catholics can’t be wrong.

Being a smart businessman is no reason not to get a Valentine.

Archbishop Blase Cupich of Chicago gets Valentine # 4. He’s worth the stamp to mail it and more, for setting off a spate of Good News stories when Pope Francis announced his appointment last November. Church watchers had high expectations as to who would succeed Cardinal Francis George as spiritual leader of the “Hog Butcher for the World,” as Carl Sandburg wrote in his poem “Chicago.” Archbishop Cupich has an opportunity to speak clearly on major U.S. church topics from his mid-country perch. Concerns include immigration, worker rights and respect for life. He brings both energy and realism to the task as to what is possible in a pluralistic society. He is not likely to use the Eucharist as a political campaign weapon but will not be shy in expressing Catholic teaching. He knows you have little influence over people who won’t listen to you.

The challenges before him demand Valentines.

Sister Helen Prejean, a Sister of St. Joseph and leader in opposition to the death penalty. As author of Dead Man Walking, the book turned into movie, Sister Prejean offers a strong voice in this battle. Success has come slowly in our country but nationwide the death penalty was used less frequently in 2014, with fewer states executing inmates and fewer people being sentenced to death. According to the Washington Post, in 2014 four out of five executions were carried out by just three states—Texas, Missouri and Florida—while 43 states did not execute anyone at all. Opposition to the death penalty has been a movement supported by the Catholic Church that has actually brought about change in attitudes in our country. This is no time to stand down.

Here’s a Valentine for courage.

The Irish Jesuits deserve flowers and more for establishing Sacred Space (www.sacredspace.ie), an international daily prayer website, rooted in Scriptures. It went online in 1999 and now is available in 20 languages. The contemporary liaison with God makes it easy to pause during the day for spiritual refreshment.

Here is a Valentine for promoting the love of God.

CARA, the Center for Applied Research in the Apostolate, is the Georgetown University-based research center that for 50 years, since 1964, has offered faithful and faith-filled research for the church in the United States. Their quiet, scholarly work on the numbers merits Valentines, candy and flowers and the gratitude of journalists and all others who deal with and are affected by the institutional church.

Finally, love for retiree volunteers. These may be the most important people in parishes today. Retirement to them means helping others in everything from informal parish service to formalized Meals-on-Wheels programs. They set up the altar for morning Mass, distribute Communion in hospitals, perform parish ministries and work in food pantries and used clothing centers. They are too many to count, but without them there would be a gaping hole in church social services.

Bring on the hearts and flowers.

Mary Ann Walsh
Show Comments (
1
)
Comments are automatically closed two weeks after an article's initial publication. See our comments policy for more.
Martin Connell
6 years 7 months ago
Sacred Space is now a ministry of the Chicago Detroit Province of the Jesuits (Loyola Press), so how about a Valentine for us, too!