Cambridge, MA. A comment on my last blog was memorable: “Fr. Looney seems to hold a fascination for everything but Catholicism...” Spelling is abominable these days. But more importantly, the writer seemed to juxtapose two disconnected fascinations, one for things Catholic, and one for other things. I do not believe that so sharply drawn an either-or choice is necessary, that not only can it be a very Catholic instinct to be interested in other things —and thus a way of being and acting as a good Catholic — but that when people look back on the early 21st century, they will recognize that a distinguishing mark of Catholicism in our era was a good-hearted, spiritual, Christian openness to other religions.
I’ve believed this for quite a while, but it was aptly verified for me when I recently came across Meeting God in Friend & Stranger, a document of about 100 pages described as “a teaching document of the Catholic Bishops’ Conference of England and Wales.” (Full disclosure: I read about it first in the April 24th issue of The Tablet, in a fine essay by Kevin McDonald, “In search of common ground.”) The document nicely recapitulates Catholic teaching on relations with other religions since Vatican II, and takes into account Dominus Iesus, that chilly 2000 document from the CDF, but is not dominated by it. If you have not been keeping up on the Church’s teaching on religions, this document would be a good place to start. It has six chapters:Chapter 1. What is ‘Interreligious Dialogue?’ Chapter 2: The Changing Face of Britain [note: a most interreligious and diverse society today]; Chapter 3: Dialogue in the Teaching of the Catholic Church; Chapter 4: Prayer and Worship; Chapter 5: Interreligious Marriage Chapter; 6: At the Local Level. In his foreword, Archbishop Vincent Nichols highlights two motivating principles for the document: “the belief in God, as expressed in the great religious traditions of humanity, is a force for good in our society today,” and “that the Catholic faith instructs us [my emphasis] and guides us not only in the unique pathway to God through Jesus Christ, but also in the manner in which we are to learn about and cooperate with people of other faiths.” 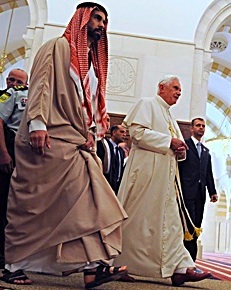 It is not necessary here to summarize the document, since you can read it for yourself, but I wish to highlight several points. First, this is no liberal document. It is mainstream and consensus Catholic teaching, and indeed it remains rather cautious in balancing the confession of Jesus as Savior with its genuinely positive gestures toward people of other faith traditions. That is to say, it adheres to the great balancing act that characterizes post-Vatican II Catholicism: a deep commitment to Jesus Christ, in the Church, and a determined, positive, and (I believe) irreversible openness to other religions. If anyone today still wants to be a loyal Catholic who thinks with the Church, what is taught here in Meeting God in Friend & Stranger is part of that distinctive thinking. But the implication of the document also cuts the other way: we can likewise respect people of other religions who believe and belong, who have strong, even exclusive faith convictions. We do not intend to attack or abuse our believing neighbors.
Second, the language is warm and sensitive. While no one reading this document would think that the Church has suddenly declared all religions to be equal, it clearly communicates that Catholics are seeking to be humble and open, welcoming of new religious neighbors, and hospitable in welcoming friendships across religious boundaries. We are this way because Jesus was this way. Third, it is a very practical document, with chapters 4-6 (interfaith prayer; interfaith marriages; local initiatives in different parts of Britain) addressing more practical points regarding how we are in fact to live with our neighbors of other faiths.
Take for example Chapter 4, “Prayer and Worship,” very much in the spirit of John Paul II’s 1986 interfaith meeting Assisi. As the Pope said shortly after the event: “We can indeed maintain that every authentic prayer is called forth by the Holy Spirit, who is mysteriously present in the heart of every person.” The chapter recognizes the value of the desire for prayer across religious boundaries, the role of the Spirit in the prayer of everyone who is praying at an interfaith event, and the value of visiting the holy sites and prayer spaces of each other’s religions. Similarly, Chapter 5 on “Interreligious Marriage” seeks to balance a commitment to the Catholic faith even in an interfaith marriage, with a recognition that the non-Christian spouse’s faith too must be honored, and that harmony in the marriage must be founded in mutual respect and love. Interfaith marriages are a fact of life, and there is no hint here that the other religion of one’s spouse is to be demeaned or merely tolerated, or that the children are territory to be fought over.

Could the document have said more? Of course. It does not explain how Christian commitment truly leaves room for truly respecting other believers without likewise respecting their religion’s beliefs, holy books, and leading figures, or how truly respecting another faith does not end up implying more equality among religions than the document acknowledges. It does not give more specific examples of how learning from another religion, such as will have been happening over the past 50 years, has changed Catholicism for the better; Muslims, Hindus, and Buddhists are still described in generalities. Isn’t there a store of good and better examples by now, 25 years after Assisi? It does not explore in much depth the fact that a more demanding form of interreligious prayer is a not infrequent practice today, whereby people of different faiths, Catholics included, share each other’s worship in ways more complex than happened at Assisi. And so on. We need more insight to go with the balancing. But no matter. This is not a theological treatise, but a (very successful) pastoral document. Perhaps we should assume that it is to be supplemented by reading not only Church documents, but the writings of theologians such as my fellow Jesuits, Jacques Dupuis, SJ (e.g., Toward a Christian Theology of Religious Pluralism) and Gerald O’Collins, SJ (e.g., Salvation for all: God’s Other Peoples), and Peter Phan's Being Religious Interreligiously.
But one need not take up those  and and other even more challenging  books, since there is quite enough in Meeting God in Friend & Stranger to satisfy most readers, and to assure us that a deep interest in the many faiths around us is a very Catholic quality indeed. Fascinating.

PS: In a comment, PJ has noted that the Indian Bishops issued, over 20 years ago, a very forward looking set of Guidelines for Dialogue — obviously, with attention to the very religiously diverse Indian context. Courtesy of PJ, you can find a pdf of those Indian guidelines here.

Francis X. Clooney, S.J.
Show Comments (
3
)
Comments are automatically closed two weeks after an article's initial publication. See our comments policy for more.
PJ Johnston
11 years 5 months ago
Thank you for linking this document - I might not have seen it otherwise.
PJ Johnston
11 years 5 months ago
This is rather disappointing (even a big step backward) compared to CBCI's Guidelines for Interreligious Dialogue, isn't it?
11 years 5 months ago
"...the writer seemed to juxtapose two disconnected fascinations, one for things Catholic, and one for other things. I do not believe that so sharply drawn an either-or choice is necessary"
Indeed, Padre...