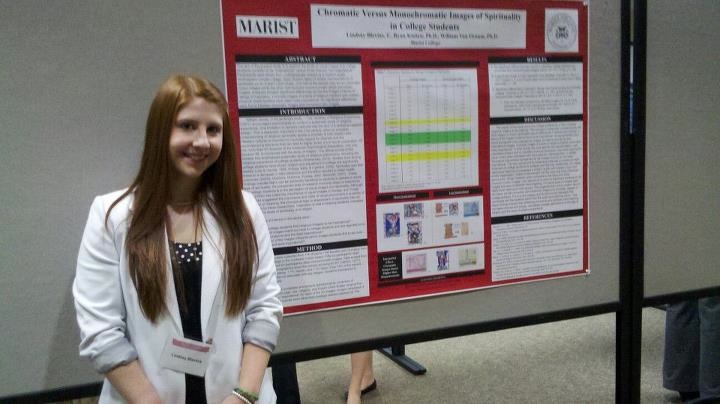 The American Psychological Association has over 50 divisions including interests such as teaching of psychology, psychotherapy, psychological testing, neuropsychology, psychology of peace and many other interesting areas. Recently Division 36—Society for the Psychology of Religion and Spirituality—held their 10th Annual Conference on Religion and Spirituality at Loyola University Maryland. One of my Marist College students, Lindsay Blevins, was first author on a presentation titled “Monocrhromatic versus Chromatic Images of Spirituality.” Lindsay conducted a study in which college students were shown different Vatican postage stamps, some containing traditional images of biblical events whereas others offered more impressionistic theological themes. Lindsay explained her research in this manner:

“The results of our study show that college students do, in fact, consider religious imagery to be inspiring. This concept is noteworthy considering the drift from religion in today’s generation due to differences in opinion and scandal. In terms of the images found to be inspirational, strong similarities were found among the more inspirational images, as well as among the less inspirational images. Concrete images of religious tradition were rated more inspirational. In other words, the more specific the representation—with characters present and an identified historical dimension—the more inspiring the visual milieu when contrasted with more abstract, impressionistic, or strictly-theological phenomena represented by the images to be the least inspirational.

Each year the Loyola Maryland Conference brings together psychologists who are interested in studying religion and spirituality. Lindsay Blevins concluded: “Personally, I especially enjoyed being able to talk to Dr. Ralph Piedmont, Director of the Mid-Year Conference, and Dr. Chris Boyatzis, President of Division 36 of the American Psychological Association. It was great to see the leaders of the organization interested in issues affecting young people.”

Show Comments (
6
)
Comments are automatically closed two weeks after an article's initial publication. See our comments policy for more.
ed gleason
8 years 9 months ago
A good conference that says .. we should use what we already have in abundance. Last Sunday one of our un-Churched granddaughters, a college fresh-woman met us at our inner city Franciscan parish for 9AM mass. She is an artist and wanted to see the ornate church. She was thrilled with the ceiling pics and stained glass which we explained. On the drive home she accepted, with enthusiasm, our invitation to enter RCIA this year and be baptized next Easter. see panorama pic of what she saw,
http://www.panoramicearth.com/2619/San_Francisco/St_Boniface_Church
8 years 9 months ago
Thanks, Bill, for sharing the work of your student with us.  It gives me hope when I read about young perple like Lindsay, who are trying to involve other young people in a study of religon and spirituality.  Art has long been a means of inspiring people to consider the immenance and transcendence of God.  In the Middle Ages, it was the means of educating people who were illiterate.  Beautiful art never fails to inspire me.  Lindsay's use of Vatican stamps was certainly creative!

This blog reminds me of the many ways God is present in our lives if we are only attentive.   As my doctor said, God still provides miracles.  So we older people  also need to continue studying our faith and the faiths of others.  This Thursday, I'll be privileged to hear a talk by the Dalai Lama on "Ethics and Compassion in a Changing World".

Ed, That is such good news about your granddaughter.  Your parish church is beautiful.
we vnornm
8 years 9 months ago
Mr. JRC:

Here is more, from an article that defines and then tries to "describe" different spiritualities, from  http://www.cashel-emly.ie/launch-of-spirituality-of-our-times/

"Spirituality, as a topic, is a difficult one to pin down. It is a vague concept.  “Voguish and vague!” It means different things to different people.  Perhaps its vagueness accounts for its popularity.  It gives great individual scope.  We have had Celtic Spirituality, New Age Spirituality and the Little Way of St. Therése of Liseaux in recent years which have all attracted much interest.  There are meditation groups who seek to progress in Contemplative Spirituality and these involve many young people.  Another form is Applied Spirituality where people seek to relate to God in their everyday experience – seeking God in “the bits and pieces” of everyday life, as Patrick Kavanagh put it...

“So, how many of the contributors to Spirituality for Our Times attempt to define their subject?  Only one, Patricia Donnellan, in her title, “Out of the Depths I have Cried”.  She quotes Sandra Schneider, who defines spirituality as it is used today as follows:
‘The experience of consciously striving to integrate one’s life in terms not of isolation and self-absorption but of self-transcendence towards the ultimate value one perceives.  Its essential elements are conscious effort, the goal of life integration, through self-transcendence, and the finalisation of the project by ultimate value’."

I suspect that you, as I, find Father Martin’s definition apt.

Great to see you posting again.  I just have a brief question for you and your student.  Just what is spirituality?  I asked this awhile ago on another thread and it seems no clear definition arose.  Do you or anyone at the conference have an operational definition of this concept.
we vnornm
8 years 9 months ago
Mr. JRC:
In the book entitled “The Jesuit Guide to (Almost) Everything (A Spirituality for Real Life),” Jesuit Father James Martin describes spirituality in the following helpful and beautiful way: “In brief, a spirituality is a way of living in relationship with God. Within the Christian tradition, all spiritualities, no matter what their origins, have the same focus—the desire for union with God, an emphasis on love and charity, and a belief in Jesus as the Son of God.” (p. 2)
I really like Father Martin's defintion. bii
JR Cosgrove
8 years 9 months ago
Dr. Van Ornum,


On a forum about six weeks ago, spirituality was discussed a little bit and I posed the same question.  Here is the thread and my question.


''I have a question.  What is spirituality?


Is is just a nonsense term or does it have some specific definition?  Is it a way of putting other people down by saying I am spiritual and you apparently are not.  Is it a flow of serotonin in the neurons or a dopamine transmission?


What are people actually seeking when they say they want spiritual experiences?  We have all had very powerful emotional experiences, sometimes bordering on the ecstatic but how does one classify something that is spiritual with something that is just emotional?  We can all concentrate on our navel have a mental experience but is that spiritual?  Are we just witnessing differences in human due to DNA differences and gene expression or are we actually describing some state that has no physical explanation?''


So from a hard core believer in Christ and the Church, I appreciate Fr. Martin's attempt to define spirituality but he limits it to Christian experience which I am sure has its limitations for a lot of people.  I could also describe a host of Catholic/Christian experiences or actions that I believe reflect belief in Christ and a desire to be in union with God, but I doubt that many would agree with each other here that they are spiritual or in fact good actions.


For example, Fr. Martin's definition includes the phrase ''love and charity'' which as a Christian is very understandable.  But what counts as love and charity?  As you know that is a contentious area.  If I commit an act that I consider is love and charitable but the end result is to harm others, does that count if I had good intentions.  I believe there are hosts of acts we as humans do that are both good intentioned and also have good results.  But often they don't mesh.


I am somewhat with the voguish and vague crowd because of the lack of specificity.  I really believe in charity and helping but often question just what helps and frequently recognize what is ostensibly helpful may in fact actually be harmful.