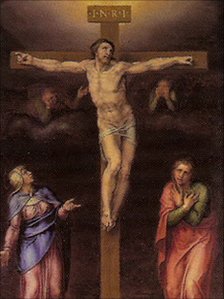 Again.  That makes (at least) three masterpieces found in Jesuit residences, including a Caravaggio in Ireland and a Tintoretto in Pennsylvania.  We really have to start paying more attention.  Here's the story from the BBC.

A lost painting by Renaissance artist Michelangelo has been hanging in a University of Oxford residence, an Italian scholar claims. The Campion Hall painting, which depicts the crucifixion, had been thought to be by Marcello Venusti. But Antonio Forcellino said infra-red technology had revealed the true creator of the masterpiece. It has been removed from a wall of the Jesuit academic community and sent to the Ashmolean Museum for safekeeping.

The master of Campion Hall, Father Brendan Callaghan, said: "It's a very beautiful piece, but far too valuable to have on our wall any more." He said he greeted the development that the work - called Crucifixion With The Madonna, St John And Two Mourning Angels - could be a Michelangelo with "a mixture of excitement and slight concern". "Simply having it hanging on our wall wasn't a good idea," he explained.

James Martin, S.J.
@jamesmartinsj
Show Comments (
3
)
Comments are automatically closed two weeks after an article's initial publication. See our comments policy for more.
Joss Heywood
10 years 3 months ago
... and the English Jesuits just sold St Cuthbert's Gospel for $14.3m!
http://www.economist.com/blogs/prospero/2011/07/early-books&fsrc=nwl
David Nickol
10 years 3 months ago
If I were you, Fr. Martin, I'd fill up a cart with everything in my residence and take it off to Antiques Roadshow.
Kang Dole
10 years 3 months ago
Not to be too sober or anything, but it's probably worth noting that no process of building consensus on who painted (or whose workshop painted) the crucifixion scene has really started. A deservedly influential scholar has pt forward the claim, but others have yet to come down on the question. As it is, there will probably never be full consensus.