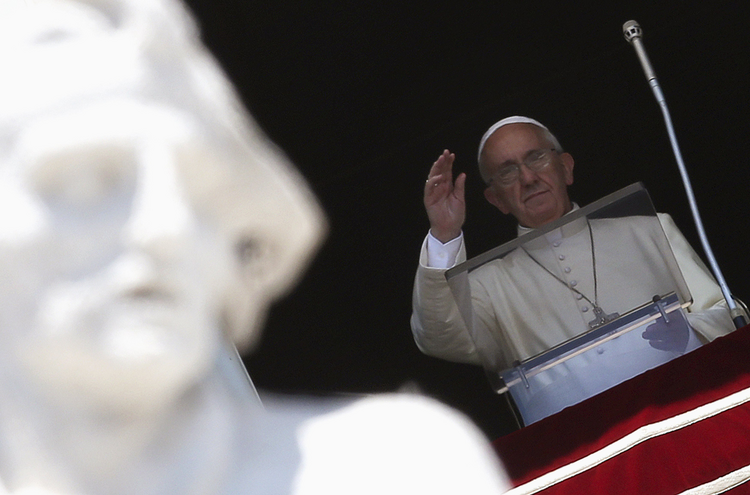 Since the first days of his pontificate, Pope Francis has spoken of his plans to renew the Synod of Bishops. In the last weeks it emerged as a centerpiece of his ministry. Three times this month he has spoken of “synodality," that is, the role of meetings of bishops in church governance. The new pope suggests that synodality may be a source of unity within the Catholic Church itself as well as with the Orthodox, for whom synodality is the primary form of church governance.

Keep alert. Listen for this word, “synodality.” It looks to be the heart of the Franciscan reform of the church.

While the advance of collegiality among bishops is regarded as one of the great ambitions of the Second Vatican Council, it was an idea still born. A Nota Praevia, a preliminary note, attached to the Dogmatic Constitution on the Church, Lumen Gentium, by Pope Paul VI, directed that none of the document’s teaching on collegiality or the Synod of Bishops should prejudice the rights and privileges of the pope and the Holy See. As a result, the Synod of Bishops has been a consultative, not a deliberative body, and its effectiveness depends on papal endorsement.

The only teaching document ever issued directly by a Synod was “Justice in the World” in 1971. Ever since the results of subsequent synods have been published by the pope as apostolic exhortations, whose release marks the conclusion of the synod. Under Pope John Paul II the church became more centralized, the teaching power of bishops was curbed, and the workings of the Synod of Bishops tightly controlled.

From the beginning Pope Francis has indicated his desire for greater representation in the running of the church. The most concrete step he has taken in that direction was the appointment of a council of cardinals from each of the continents to advise him on church renewal and the reform of the Roman curia. He has also indicated the council may be replaced in the years ahead by a council elected by the Synod.

In mid-June, when he met with bishops planning the next meeting of the Synod of Bishops, he considered with them a number of topics including ecology, a topic close to his heart, as the focus for the next general assembly of the Synod in 2014. But the one topic that received special attention was (the strengthening of) the Synod itself and the wider theological concept of synodality, suggesting exploration of a real development in Catholic ecclesiology where various deliberative bodies might have an increased role in church governance.

Francis has already made clear, for example, he favors greater autonomy for bishops’ conferences, a move consistent with a more synodal ecclesiology. In one talk this month, he indicated that as it stood the Synod of Bishops was a still “half-baked” development of Vatican II. Not “half-baked” in the derogatory sense, I think, but rather in the sense of “unfinished” like “a work in progress.” The day for the Synod and other church bodies (diocesan councils, e.g.) to come into their own is drawing close. Canonists should get ready to do a lot of new work.

On Saturday, June 30, in his homily for conferral of the pallium on new archbishops, he told them, their task, like his, is to confirm the unity (in difference) of the church. “Let us go forward,” he urged in unscripted remarks, “on the path of synodality, and grow in harmony with the service of [papal] primacy.” In effect, Pope Francis has re-founded the pallium, traditionally a symbol of unity with the pope, as symbol of both collegiality and papal primacy.

Just as important was a statement Francis made during a meeting with a delegation of Orthodox bishops who had come to join the celebration for the feast of Saints Peter and Paul. He told them he hoped to learn from them about “Episcopal collegiality, and the tradition of synodality, so typical of the Orthodox churches.” For a millennium what distinguished the Roman Catholic Church from the synodal and regionally organized Orthodox Church had been the monarchical papacy and its centralized government.

Reform of the Synod of Bishops and the growth of synodality within the western Catholic Church would greatly enhance the opportunity for union between Rome and the Churches of the East, removing two of the greatest obstacles to reunion, the monarchical papacy and Roman centralism. The Eastern Catholic Churches already have some degree of synodality, though they have made it clear that they would prefer still greater autonomy from Rome.

Two things that drew the Ecumenical Patriarch Bartholomew to Rome at the time of Pope Francis’s inauguration was Francis's reference to himself as “bishop of Rome” rather than as pope and his description of “the church of Rome [presiding]” over the other churches “in love.” Day by day, event by event, one symbol at a time, Pope Francis seems determined to make all the churches, most of all our own, understand that the true nature of primacy is a love which allows the other to be other.

Drew Christiansen, S. J., the former editor of America, is a visiting scholar this year at Boston College.

Show Comments (
6
)
Comments are automatically closed two weeks after an article's initial publication. See our comments policy for more.
ed gleason
6 years 6 months ago
This Synodality by Francis is so far, the most hopeful sign of reform. The US bishops since 1985 kept looking over their shoulders toward Rome to see if their handling of sex abuse steps would be 'approved' and that was the biggest Church failure in my long lifetime. JPII could not even see Marciel's activity in his own chambers.as Marciel brought his children to the papal apartment for a blessing. .
ron chandonia
6 years 6 months ago
If he is serious about collegiality or synodality, the pope should immediately reverse the restrictions on pronouncements from the national conferences of bishops that were included in JPII's 1998 "Apostolos Suos." While such a step might seem far removed from the concerns of the person-in-the-pew, it would signal that the bishops are being treated like adult peers instead of childish subordinates--and that would be a major step toward a wider recognition that all baptized Christians are essentially peers.
Christian Boyd
6 years 6 months ago
The reform of the Synod of Bishops and the growth of synodality within the western Catholic Church would greatly enhance not only the opportunity for union between Rome and the Churches of the East, but also with historic Protestant churches from the Reformation era. This is a point the Presbyterian Church (U.S.A.) highlighted in a discussion paper in 2000 (see http://www.pcusa.org/resource/successor-peter/).
Bruce Snowden
6 years 6 months ago
SYNODALITY offers true collegial fabric and structure to Church governance, interwoven and interlaced with love-based stability, giving the Church TWO legs to stand on, Bishop and Pope. It’s just like the two legs of a seagull, web-footed interwoven and interlaced in fabric and structure, standing on two feet, just like the seagull standing by the smoke stack as it delivered white smoke at the election of Pope Francis. Is that one of “the signs and wonders” (signs and wonders in the sense that we may also simply "wonder" about its Gospel-connected sign-value) as promised by Jesus to the Church? It certainly focuses on our accountability to the Holy Spirit’s intent at Vatican Council II saying, “At last we’re getting it right, syphoning from the Cross of San Damiano Jesus’ words now spoken to the “Little Poor Man” from Argentina, his Father's name, Ignatius, Pope Francis, “Rebuild my Church which is falling into ruin!” Not surprising really, as he did say, “Behold, I am with you all days … .”
Bill Mazzella
6 years 6 months ago
The significant thing about this trend is that the right wing has conceded that the restoration attempt by JP II and Ratzinger has been a prodigious failure. This retro group has watched (and caused) the fleeing of Catholics to the Pentecostals and other groups which cater to the Spirit. While the bishops have been part of massive cover-up, financial scandals, and mediocrity, people have flocked to movements which feature the real Jesus. Not that their intentions are necessarily right. Like Innocent III they realize they need someone like Francis to give legitimacy to the Empire while they continue to build 100 million dollar churches and cater to the rich. Francis will have to stay one step ahead of them.
HAROLD ISBELL
6 years 6 months ago
Right on. I don't think the "Ravenna Document," "Ecclesiological and Canonical Consequences of the Sacramental Nature of the Church - Ecclesial Communion, Conciliarity and Authority," as issued at Ravenna, 13 Oct 2007 by the Joint International Commission for the Theological Dialogue between the Roman Catholic Church and the Orthodox Church is cited in these comments. The document is published on the website of the Holy See using the search term, Ravenna Document. Clearly, the discussion is already far advanced but by now long overdue. In very man
Advertisement