A Letter from Pope Francis

A Letter from Pope Francis 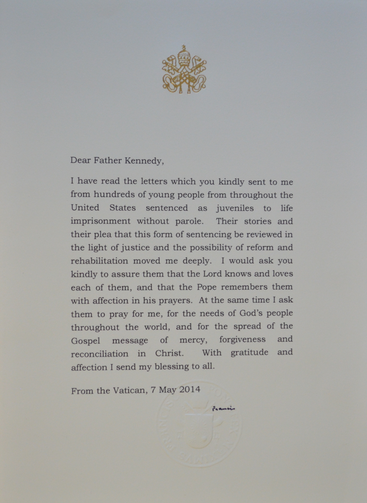 Over the years the state of California has spought to ameliorate the cruel and harsh sentencing of youth who committed their crimes between 14 to 17 years of age. Two years ago SB9 was passed. This law gives these youth the opportunity to be united to their families one day.

Since then California has become one of the leaders in passing laws to help kids that were sentenced to cruel and harsh sentences like LWOP (life without the possibility for parole). As we know, we are the only country in the world that gives LWOP to youth. In states that still give a LWOP sentence, these children face the fact that they may never be with their families again.

Jody Kent in Washington, D.C., the leader of the national campaign to end LWOP and insure that no children ever get sentenced to life in prison without possibility of parole, collected 500 letters in many states from incarcerated youth who received a sentence of LWOP. These letters were addressed to Pope Francis because they had faith that this world leader would advocate for them. Some Jesuits and I helped forward them to the pope three weeks ago.

The pope answered these letters by writing me acknowledging receipt of them and to give hope to those who now have no hope. The pope’s letter is strong and clear. He believes our youth deserve a second chance. Each prisoner who wrote a letter will be receiving a copy of the pope’s letter.

As we know, a youth’s brain has not developed to the level of an adult at the ages when they commit these crimes. They should be tried in juvenile courts not adult courts. It is very clear that Pope Francis understands this and has taken this issue of youth locked up as a personal concern.

We are grateful to the commitment of Pope Francis. His leadership should influence our political leaders to make the changes necessary so that kids can be treated differently than adults. The pope’s letter affirms we need to give to youth who have committed crimes a second chance.

Show Comments (
3
)
Comments are automatically closed two weeks after an article's initial publication. See our comments policy for more.
Beth Cioffoletti
6 years 6 months ago
Amen, amen, amen! Thank you for this action that you have taken, Fr. Kennedy. Knowing some of these "kids" and their families is so very sad and tragic. Sometimes I think that there is no solution, no way of untying this knot of hopeless despair. The prayer of Francis may indeed move this mountain.
Dave Majkowski
6 years 6 months ago
My friend Rick deserves another chance... -> Rick Wershe, better known to the public as "White Boy Rick", is currently serving a life prison sentence in the Michigan Department of Corrections for a single drug possession conviction from January 1988. When he was arrested he was only 17 years old. Newly uncovered evidence proves he was led into the life of being a teenage drug dealer by the federal government. Rick was recruited by a narcotics task force made up by the FBI, DEA, and several Detroit Police Department detectives in 1984 as a 14 year old juvenile, encouraged to drop out of high school and eventually put to work as a paid undercover operative in some of the state's most dangerous criminal organizations for the next three years. Following his conviction, he was sentenced under Michigan's ultra-tough "650-Lifer Law", a law erased from the books in 1998, allowing him to be eligible for parole.In the three times before the parole board in the last decade, he's been rejected every time. As of 2012, he was the only minor sentenced under that law in the whole Michigan prison system that remains behind bars. He is also the only person in the country convicted as a minor for a non violent crime facing the prospect of serving a life sentence. In the 25 years Rick has been incarcerated, he has cooperated with law enforcement extensively. Prosecutors have said that without his help, the largest police corruption case in Detroit's history would not have been possible. Some of the people ending up being convicted included members of Coleman Young's family. Rick's situation doesn't feel right in many ways. This site will hopefully educate people who are unfamiliar with his situation , however isn't intended for "fans" to glamorize or endorse his behavior. Once a boy who made a mistake, Rick is now simply a man in his mid-40's in search of a second chance. http://www.thefix.com/content/story-white-boy-rick-richard-wershe-detroit-corruption70041?page=all http://www.ticklethewire.com/2013/09/11/column-the-michigan-parole-boards-crime-against-white-boy-rick/ http://www.deadlinedetroit.com/articles/6448/steve_fishman_parole_board_lacks_guts_to_free_white_boy_rick http://www.detroitsports1051.com/drewlanepodcast/2014/01/15/white-boy-rick-from-oaks-correctional-facility http://www.deadlinedetroit.com/articles/466/white_boy_rick_time_to_set_him_free This is a letter from a retired Detroit police officer to the Michigan Parole Board in June, 2012. -> http://i1369.photobucket.com/albums/ag220/Dave_Majkowski/greene_zps6423a7e5.jpg This is a letter to the Michigan Parole Board from a former FBI agent who worked directly with Rick Wershe when he was working undercover for them and the Detroit Police Department. He is someone who knows the truth and is not afraid to speak up. -> http://i1369.photobucket.com/albums/ag220/Dave_Majkowski/gregg_zps8013fa8f.jpg https://www.facebook.com/freewhiteboyrickwershe http://www.change.org/petitions/free-white-boy-rick-wershe http://freerickwershe.com/Home_Page.html https://twitter.com/freerickwershe
Samantha Adams
6 years ago
I find this post very interesting. Senate Bill 9 also called SB 9 became California law in January 2013. This law gives a second chance to most people who were under the age of 18 at the time of their crime and sentenced to life without parole. They can ask the court for a new sentencing hearing. At that hearing, they will have the chance of getting a new sentence with the possibility of parole. I can really say that Pope Francis truly has a heart for the youth.