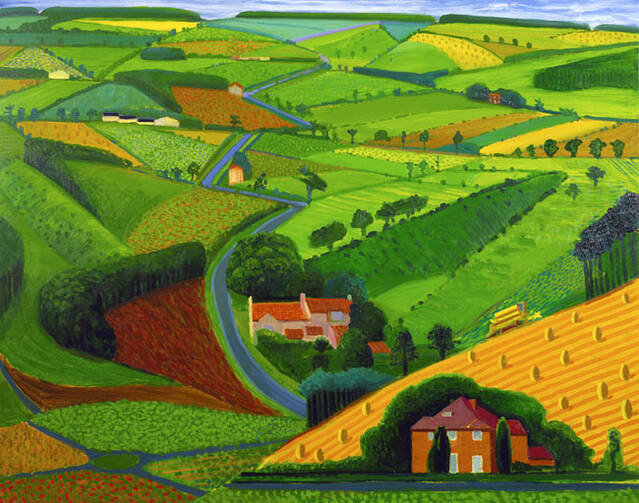 A prospective reader of this blog, noting its title, might assume that it might be about contemplation, the meditative techniques and practices which help us see ourselves and the world differently. In fact, it is about my reactions to an extraordinary and large (the largest exhibit ever held in San Francisco's De Young Museum) exhibit of paintings and drawings by David Hockney, the British artist: "David Hockney: A Bigger Exhibition." But it will also, in a sense, be about contemplation.

It had been quite some time since I last saw any Hockney art. My earliest memory of his paintings stem from his period of living in Los Angeles (1964-1999) which reflected the pellucid skies of Southern California and, often enough, showed nude friends of Hockney around a swimming pool. I thought of it then as a variant of pop art. But Hockney has shifted a great deal since his return to living in East Yorkshire. His landscapes, especially, exhibit the splendor and glory of the everyday. The exhibit is replete with radiant landscapes the size of large murals, showing fields and woods in different seasons. Synthesizing aspects of Munch, Klimt, Cezanne, Van Gogh and Picasso, these large paintings show us several perspectives at once—for an experience of space much fuller than what could ever be found in real life.

Rodin once famously said: "It is the artist who is truthful and the photograph that lies." Paradoxically, Hockney is a devotee of using photographs, video cameras, iPads and iPhones to capture the scenes he paints. In one respect, Hockney agrees with Rodin. The problem with a photograph is that it only captures one moment in time and one perspective on the scene depicted. Hockney was intrigued by Picasso and Cubism because they were able to juxtapose in one painting multiple perspectives. Hockney thinks that his use of technology to capture multiple views of a scene over time helps us find aspects of time relative to the image and presents us with vistas bigger and wider that feature multiple overlapping vanishing points pulling the viewer ever more actively into the scene. As Hockney once said: most people are fairly blind. They do not really look deeply or get beyond the surface.

In one section of the exhibit, "The Great Wall," Hockney juxtaposes a long series of postcards of paintings over time. He noticed that sometime around 1430, with Van Eyck in Flanders and roughly at the same time in paintings from Florence, a new perspective of depth beyond the surface and, indeed, of perspective itself came into being. He hypothesized that painters in the West began to rely on something like a camera lucida or a primitive form of a camera obscura or used the effect of concave mirrors to gain a single sight-angle on the scene or person they were painting. He developed this idea in a book he wrote: Secret Knowledge: Rediscovering the Lost Techniques of the Old Masters (London: Thames and Hudson, 2006). Hockney also undertook some drawings using the camera lucida. While some people took umbrage at Hockney's claim that great artists used some device to capture perspective, he notes that the device can help but it in no way captures the color, shadows, draftsmanship of a painting. Nor does it take anything away from the genius of a painter. As Hockney puts it: "optics do not make marks, only the artist's hand can do that."

The exhibit was the first large exhibition of Hockney's work in this country since 2006 and it has some overlap with a gigantic exhibition, "David Hockney: A Bigger Message," which drew some 650,000 viewers in London, Bilbao and Cologne in 2012 (cf. Martin Gayford, A Bigger Message: Conversations, London: Thames and Hudson, 2012).

I gained some perspective on the meaning of a "bigger message" from a painting of that title in the current exhibit. Hockney had been intrigued by a famous canvas of Claude Lorrain, "The Sermon on the Mount," which hangs at the Frick in New York. Noting that age and added varnishes had obscured and dimmed some of Lorrain's original colors, Hockney did several of his own versions of the Lorrain painting (they are in this show). One very large canvas called, "The Bigger Message," captures the scene from the Lorrain canvas in more vivid colors. Interestingly enough, it is hung in a gallery which mainly shows extraordinarily large mural size scenes of Yosemite.

In a sense, nature itself becomes also the bigger message if we can see it in fresh ways. As Lawrence Weschler notes in his catalogue essay, writing of videos Hockney made over a whole season past exactly the same trees, now stripped bare, gleaming against a snowdrift morn or later in spring and summer: "all that detail amidst all that profusion, the splendor of it all. It was like nothing you'd ever seen before, much as Gerald Manley Hopkins had framed a similar vision in his ecstatic poem-prayer, Pied Beauty, from 1877: 'Glory be to God for dappled things—for skies of couple-colour as a brindled cow; for rose-moles all in stipple upon trout that swim, fresh-firecoal chestnut-falls; finches' wings; Landscape plotted and pieced—fold, fallows and plough; And all trades, their gear and tackle and trim. All things counter, original, spare, strange; Whatever is fickle, freckled (who knows how?) with swift, slow; sweet, sour; adazzle, dim; He fathers forth whose beauty is past change. Praise him!"

Hockney's large landscapes (with fauvist colors which belie what a mere eye or camera can capture) and also his intricate charcoal drawings of the terrain in East Yorkshire in one sense give us that bigger message which the Sermon on the Mount paintings hold forth. He is also adept at portraits and the exhibit shows a whole range of them—often enough of friends of Hockney over time which show them aging and changing in time. Hockney has also produced what he calls cubist videos which capture multiple perspectives at one time. Essentially Hockney's great pre-occupations are, as always, space, light, time and memory. As Weschler notes, when seeing Hockney's extraordinary landscapes: "In fact it wasn't so much that you were seeing things you had never had before; rather you were seeing in a way you never had—if not infinitely, certainly quantumly more vividly." As Hockney states it, one-point perspective can be surpassed and obliterated.

The exhibit in San Francisco, alas, is not travelling elsewhere. Perhaps that is why both the New York Times and the PBS Newshour did their own reviews of this remarkable achievement. Art that leaps boundaries as Hockney's does is worth attending to as it might help us, too, find new ways to leap boundaries. Reviewing the exhibit for the San Francisco Chronicle, Ken Baker asked trenchantly: "Do you see the world differently?" He noted that leaving the exhibit he looked at and noticed the landscape, trees, multiple greens of San Francisco's Golden Gate Park in startling new and fresh ways. Do I see differently? That is the essential stuff and question of contemplation, is it not?

John A. Coleman
Show Comments (
1
)
Comments are automatically closed two weeks after an article's initial publication. See our comments policy for more.
Bruce Snowden
8 years 6 months ago
I had to look up "wolds" on the internet, to learn it comes from the Old English "weald" meaning "forest or range of trees." Then I understood better David Hockney's painting on which the blog "Learning To See Differently" focuses and which my post will try to briefly address differently. I use the word "briefly" my intention, although that's going to be difficult, as posting is, I think, like scuba diving in that it brings to light much that is unseen, unlike surface surfing which reveals pretty much the unchallenging same. I realize a gratuitous statement has been made, meaning that whatever is gratuitously asserted may be gratuitously denied. Respectfully, so be it! Maybe posting is not like scuba diving. But it does give opportunity to express views that would otherwise remain draped in silence. See, already I’m becoming something other than “brief” my personal curse! ? Whatever the case I have to admit I know nothing about art, except that I love to look at anything artistic for enjoyment and sometimes to read the soul of the artist. Jesus didn’t say, “By their art shall you know them,” but did say, “By their fruits shall you know them.” For me, the fruit of David Hockney’s “weald painting” is contemplative, as trees and hills air and sunshine usually are. Art as a soul-expression is I think, a kind of Faith experience, more precisely a kind of Eucharistic experience, a body, blood, soul and humanity/divinity thing, wherein one can look at a piece of materiality, a consecrated wafer of bread on display, or the marvel of a piece of painted canvas and in wonder and awe exclaim. “God!” As David Hockney said as recorded in the blog, there are multiple perspectives to art, to which many are sight impaired, lacking in depth and in effect surface scratchers. I tend to agree. Well, true to self I’m far from brief, but concluding I must say Gerald Manley Hopkins prayer –poem is out of this world, more than beautiful, more than profound. Another form of art in which God can be seen invisibly visible in every word! I loved “Learning To See Differently” in its entirety – it’s the way I try to live.