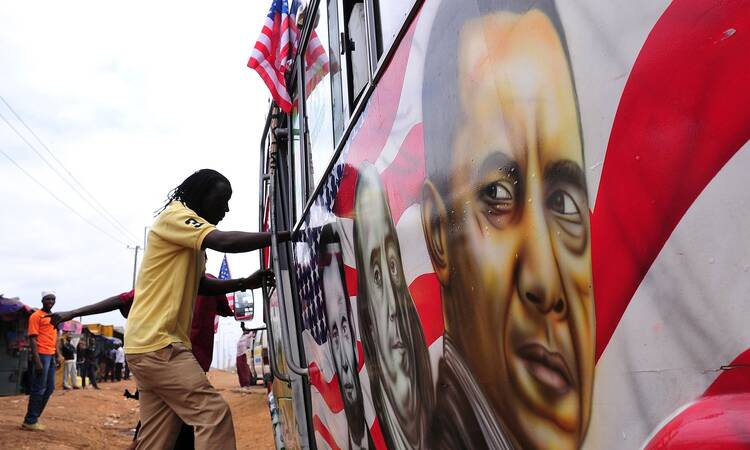 Yesterday a Kenyan Jesuit posted a delightful video to his Facebook page produced by the U.S. Embassy in Kenya, featuring a variety of Kenyans saying “Welcome” (“Karibu”) to President Obama, on the occasion of his visit to the East African country, which begins today.

It’s a superb and at times touching portrait of the faces of the Kenyan people, and includes: a women's choir singing “Jambo sana,” a popular song often heard by tourists upon their arrival; a group of Maasai men dancing and singing their traditional shukas and carrying rungas, or knobkerries; a member of the Kenyan Wildlife Service ranger standing calmly before a group of elephants, one of whom he playfully pats on the rump; fishermen and women plying their trade by either a lakeshore or seashore; a merchant who in East Africa would be call “Asian” (read: Indian); a Kenya Airways pilot and flight steward; a woman cheerfully sorting fish as she sits on the ground; a smiling group of sculptors at what appears to be the City Market in Nairobi; a Muslim merchant selling his wares; a singer strumming on a guitar; and, most marvelously, a “tout” or ticket taker, outside one of the city’s fast-moving matatus, or minibuses.

This is the Kenya I knew when I spent two years there, from 1992 to 1994, working with the Jesuit Refugee Service.  Of course it’s wrong to generalize about a people or a country, and Kenya encompasses men, women and children from a stunning variety of ethnic backgrounds speaking dozens of indigenous languages (most also speak Swahili and English), but perhaps positive generalizations are okay. Nearly to a person, the Kenyan men and women I knew were warm, welcoming, friendly, upbeat, clever, playful, helpful, and, most of all, hopeful. I adored living there, loved working and living among them, and enjoyed learning Swahili (and even a little Maasai).

While that was 20 years ago and Kenya has had significant difficulties with terrorist attacks, ethnic rivalries and violence, there is consternation among many Kenyans that the Western media is portraying their country solely as a “hotbed” of terrorism, and, essentially, a country of nothing but poverty and violence.  As with most reporting on Africa, this is unfair, and Kenyans are objecting to it.  Imagine, for example, picturing the United States only through the eyes of what happened in Ferguson, Chattanooga, or Newtown. Because many media organizations ignore Africa except during times of crisis, many Westerners understand little about the day-to-day lives of African men and women. I hope that President Obama’s visit to East Africa can illumine this for the West.

For Kenyans the visit of President Obama, a man with deep Kenyan roots, is of enormous significance and a cause for celebration. Family is of inestimable significance for Kenyans, and nearly everyone knows what tribe you're from, and the location of your family’s shamba (loosely translated as “farm” but a larger word meaning homeland).

It’s especially easy for Kenyans to figure out what ethnic group Barack Obama hails from.  He is obviously a Luo, as evidenced by the “O” that begins his last name.  Luo names are ones like Odhiambo, Omondi, Okello, Onyango, Otieno.  When I living in Kenya, the Jesuit vocation director for East Africa was a florid-faced, white-haired, Irishman named Sean O’Connor who, like me, loved his adopted country.  Sean loved to joke with the East Africans when they asked where he was from, that of course he was a Luo.  "Can't you tell from my name?" he would say.  "It's Oconnor, after all."

During the president’s trip to Kenya, I hope that the media covers the following: the way that Kenyans often make do with so little; the way that they are able to live among a welter of cultures and languages; the stunning beauty of their land; their deep pride in their heritage; their great love of country.  So with my friends (marafiki) in Kenya, I say to the President, “Karibu Kenya, Rais Obama!”

James Martin, S.J.
@jamesmartinsj
Show Comments (
2
)
Comments are automatically closed two weeks after an article's initial publication. See our comments policy for more.
John Placette
7 years 6 months ago
Dear People of Kenya, Our best wishes to you and President Obama. Please feel free to keep him as long as you wish. Sincerely, The People of the United States.
alan macdonald
7 years 6 months ago
We apologize for Mr Obama's cultural imperialism in asking you to promote homosexuality. Although this is opposed by every major religion (with the exception of some soon to be extinct Protestant divisions), Obama pushes this despite the fact that 1 in 4 Kenyan male homosexuals is HIV positive. It is irresponsible advice.