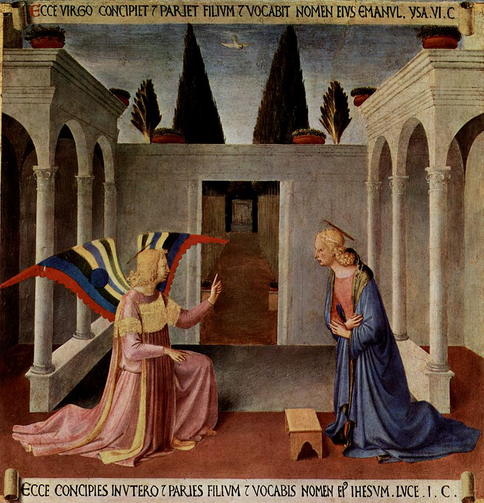 This is the story, a story I love, of how John Lennon met Yoko Ono: In 1966, he attended an exhibition of her avant-garde art in London. One of her pieces involved a ladder that he had to climb up, at the top of which seemed to be an all-black painting, until he looked through the spyglass that was attached to the canvas by a chain. The process was a bit awkward, but when he finally looked into the eyehole, he saw a tiny, single word: “yes.” And he knew he had found his soul mate.

If we believe in God, we find our true soul mate in God, who loves us beyond measure and cherishes us just the way we are. God asks only that we respond with that small word: “yes.” Often, however, we are too busy to listen for God’s voice in our lives. We have a lot to accomplish. We have stuff to do. We brush God aside. We put off our prayer life. We, in effect, say no to God.

There is such power in the word “yes”. Two of my daughters used to work for Starbucks, although for different stores at different times. As baristas, their training included the Starbucks Corporation’s “Just Say Yes” policy towards customers. The Starbucks employees were to do everything possible on the retail level to achieve a customer’s satisfaction, and to avoid ever giving a negative answer to a request. While this was not always possible, it was a worthy goal.

It occurs to me that an essential part of faith is to follow a “Just Say Yes” policy towards God. “Digo Si, Senor, en tiempos malos, en tiempos buenos,” sings Donna Pena in her bilingual hymn, and in English, “I say yes, my Lord, in all the good times, through all the bad times.”  It’s a beautiful song, and utterly true in its message, because sometimes God asks us to step far outside of our comfort zone. Sometimes that “yes” costs us dearly. The “yes” of many of the early followers of Jesus, for example, led them to martyrdom. We may not ever be called to give our lives for our faith, but we will be called to give more of ourselves than we think we can manage. And we must still say yes.

As we lovingly stumble through another Advent season, we might remember the most important “yes” of all, the answer of a young Jewish girl named Mary. Imagine her courage and her trust, to say yes to mothering the child of God, in spite of her virginity, in spite of her unmarried status, in spite of the social backlash to which she would expose herself. As Mary’s example shows us, saying yes to God requires equal parts of courage and trust. Her “yes” led her to the foot of the cross, to the unbearable sight of her son’s cruel death. It also led her to Easter’s dawn. Saying yes to the difficult as well as to the sublime is the way we live our faith.

So I am practicing saying yes. If a homeless person asks me if I can spare a dollar, I say yes. If a friend needs a favor at an inconvenient time, I say yes. If one of my daughters needs anything from me, I say yes. Yes: Absolutely! Relationships spring from our willingness to say yes to one another. Yes is fundamental, after all, to a lasting marriage: we say yes when we say “I do.” I’m trying to say yes to all that is asked of me, even if I’m tired or out-of-sorts or lazy, because I suspect that God often speaks with the voices of others. Yes is the word of faith, of trust, of affirmation, of consent. Yes is how we grow in faith and love. Saying yes to God’s invitation is a prayer in itself.