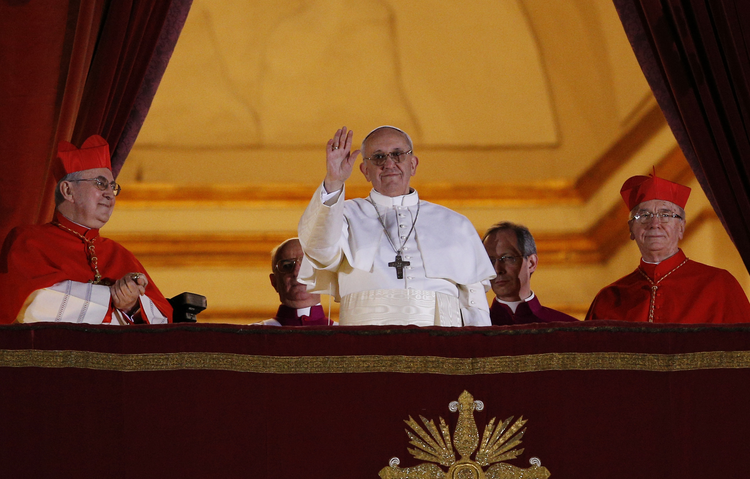 The election March 13 came on the first full day of the conclave on the conclave's fifth ballot. It was a surprisingly quick conclusion to a conclave that began with many plausible candidates and no clear favorite.

The Latin American pope, a Jesuit, was chosen by at least two-thirds of the 115 cardinals from 48 countries, who cast their ballots in secret in the Sistine Chapel.

His election was announced in Latin from the balcony of St. Peter's Basilica, to a massive crowd in the square below and millions watching around the world.

White smoke poured from the Sistine Chapel chimney at 7:05 p.m. signaling that the cardinals had chosen a successor to retired Pope Benedict XVI. At 7:07 p.m., the bells of St. Peter's Basilica began pealing continuously to confirm the election.

At 8:12 p.m., French Cardinal Jean-Louis Tauran, the senior cardinal in the order of deacons, appeared at the basilica balcony and read out in Latin: "I announce to you a great joy: We have a pope! The most eminent and most reverend lord, Lord Jorge, Cardinal of the Holy Roman Church, Bergoglio, who has taken for himself the name Francis."

The crowd in the square responded with cheers, applause and the waving of national flags.

A respected Italian journal said he was the cardinal with the second-highest number of votes on each of the four ballots in the 2005 conclave.

Cardinal Bergoglio has had a growing reputation as a very spiritual man with a talent for pastoral leadership serving in a region with the largest number of the world's Catholics.

Since 1998, he has been archbishop of Buenos Aires, where his style is low-key and close to the people.

He rides the bus, visits the poor, lives in a simple apartment and cooks his own meals. To many in Buenos Aires, he is known simply as "Father Jorge."

He also has created new parishes, restructured the administrative offices, led pro-life initiatives and started new pastoral programs, such as a commission for divorcees. He co-presided over the 2001 Synod of Bishops and was elected to the synod council, so he is well-known to the world's bishops.

The cardinal has also written books on spirituality and meditation and has been outspoken against abortion and same-sex marriages.

In 2010, when Argentina became the first Latin American country to legalize same-sex marriage, Cardinal Bergoglio encouraged clergy across the country to tell Catholics to protest against the legislation because, if enacted, it could "seriously injure the family," he said.

He also said adoption by same-sex couples would result in "depriving (children) of the human growth that God wanted them given by a father and a mother."

In 2006, he criticized an Argentine proposal to legalize abortion under certain circumstances as part of a wide-ranging legal reform. He accused the government of lacking respect for the values held by the majority of Argentines and of trying to convince the Catholic Church "to waver in our defense of the dignity of the person."

His role often forced him to speak publicly about the economic, social and political problems facing his country. His homilies and speeches are filled with references to the fact that all people are brothers and sisters and that the church and the country need to do what they can to make sure that everyone feels welcome, respected and cared for.

While not overtly political, Cardinal Bergoglio has not tried to hide the political and social impact of the Gospel message,