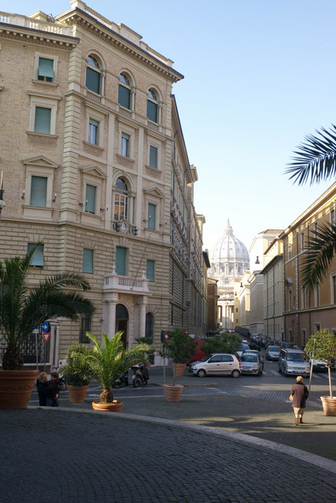 I’ve been given permission by the Jesuit Curia to reprint this story, sent around to Jesuits worldwide, written by Lisbert D’Souza, SJ, who works in our Jesuit Headquarters in Rome.

From the Jesuit General Curia, Rome

At around 10.00 a.m. this morning our receptionist, a delightful young man named Andrea, received a call.

"This is Pope Francis", said the voice. "May I speak to Fr General?"

Andrew was flabbergasted and couldn’t speak.

"This is not a joke, said the voice. I am Pope Francis. Who are you?"

"I am Andrea", Andrea finally managed to stutter.

"I am Pope Francis", said the voice. "May I speak to the General?"

Wobeto said, "Holy Father, we are praying much for you."

"Praying for what?" asked the Pope. "To go ahead or to go back?"

"To go ahead", said Wobeto and burst into the General’s office with mobile to his ear and still speaking

"The Pope!" said Wobeto, and thrust the mobile into the General’s face.

The General was totally taken aback.

He said he was so disoriented he was calling him "Pope, Your Holiness, Monsignor…."

The General said the Pope was most cordial.

"Thank you for your personal letter to me", said the Pope.

"I look forward to meeting you," said the General.

For us we are touched that of the hundreds of letters he would have received, the Pope set aside the one from our General and took the initiative to call.

It is traditional that when a new Pope is elected, the General meets him to renew the vow that links the Society with the Pope.

Here's an enjoyable video of an interview with the astonished and animated receptionist, Andrea.