It's Cuomo vs. Dolan in NY Abortion Fight 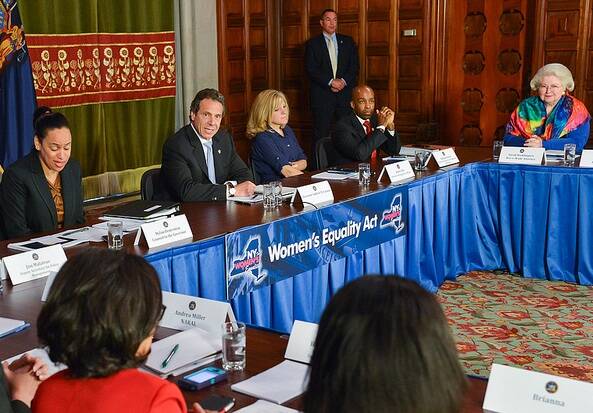 With the nation still reeling over the revelations of infanticide and assorted grotesqueries that emerged during the trial of abortionist Kermit Gosnell in Philadelphia last month and bucking a national trend of legislative encroachments against broad abortion rights, New York Governor Andrew Cuomo introduced the Women’s Equality Act on June 4, new state legislation he championed as a measure to ensure that New York remains “the equality capital of the nation.”

“We passed marriage equality,” said Cuomo. “Let’s make history again and let’s pass a women’s equality act in the state of New York.” The act’s 10-point plan toward women’s equality includes measures, among others, to equalize pay between men and women and combat sexual harassment, human trafficking and housing and pregnancy discrimination. But it also includes a measure to “protect a women’s freedom of choice” because “it’s her body, it’s her choice,” the governor repeated three times, introducing that component of the act.

The governor is now set on a course toward an epic confrontation with the state’s leading Catholic prelate, N.Y. Cardinal Timothy Dolan, who previously promised Cuomo that he would do all in his power to prevent an expansion of abortion rights in New York. Last month Dolan said the N.Y. church would be as "vociferous and rigorous as possible" in its opposition to broadened abortion rights in the state. “I am in a bit of consternation as to why in a time when there seems to be kind of a sobering up about these horrors of the unfettered access to abortion, why in New York we are talking about even expanding it further,” Dolan said

Proponents say the measure is warranted to codify existing Supreme Court law to protect a woman’s right to obtain an abortion “prior to viability, or when necessary to protect her life or health,” ensuring that “New York’s laws are consistent with the law of the land.” The changes include a guarantee of the right to an abortion up to 24 weeks gestation and beyond in the case of fetal nonviability or threats to a woman’s health, including, controversially, her “emotional health.” Right to life groups worry that extention could make New York the go-to state for late-term abortions, procedures which the Gosnell case brought to national attention. Critics of late-term abortion point out the only difference between Gosnell's infanticide and a legal late-term abortion is the location of the fetus—in-utero or ex-utero—when it is terminated by the attending physician.

In a statement issued soon after Governor Cuomo’s presentation of the act, the bishops of New York expressed their support for nine components “that enhance the true dignity of women.” But they described themselves “profoundly distressed” by the act’s 10th point on freedom of choice, a measure they charge “would ease restrictions in state law on late-term abortion and runs the serious risk of broadly expanding abortion access at all stages of gestation.”

“This legislation,” the bishops wrote, “would add a broad and undefined ‘health’ exception for late-term abortion and would repeal the portion of the penal law that governs abortion policy, opening the door for non-doctors to perform abortions and potentially decriminalizing even forced or coerced abortions. In addition, we find the conscience protection in the bill to be vague and insufficient, and we are concerned about the religious liberty of our health facilities.”

During a press conference after the act’s introduction, Cuomo said, “I understand and respect the opinion of people who disagree with this bill," but he insisted that the "codifying" of Roe v. Wade did not extend the state's abortion rights, but merely "affirms a right to an abortion."

The governor said, "I have total respect for the Catholic Church and I have total respect for their position. I’ve spoken to them about it at length. I’ve also been informed that the Catholic Church supports nine out of ten of the provisions of the Women's Equality Act, which is pretty good. When we get 90 percent on most of the initiatives, I’d be very happy. I understand the disagreement on one of the items, but I respect and appreciate the support on nine out of ten."

And that 10th point is already under attack by GOP members of the Republican-controlled state senate, who suggest that it be withdrawn and the other nine “equality” points put to vote. The act is likely to pass unaltered in the state’s assembly, which is controlled by Democrats, but even among some Democrats, the abortion measure was drawing fire.

“Governor Cuomo stated that he is looking for consensus, and we have that on the first nine points of his proposal,” said Kristen Day, the executive director of Democrats for Life of America. “The abortion language is divisive, controversial, and unnecessary. The only purpose it serves is to scuttle passage of a bill to advance women’s rights. The governor should not put the demands of the abortion industry above good legislation to promote, protect, and support women.” According to Day, the abortion clause could thwart the act's passage, just as similar pro-choice language doomed the Equal Rights Amendment in the 1970s.

Day added that there is little to suggest that New York suffers from too narrow an appreciation of abortion rights. She noted that New York rates are almost double the national average, that 33 percent of pregnancies in New York end in abortion, and that nationally, one of out of every ten abortions are performed in New York. “Further,” she writes, “93 percent of New York women already have an abortion facility in their county.”

She charged that the current abortion proposal “contains measures that are directly antithetical to the goals and values of many of the groups who have announced their support for the Women’s Equality Act.

“Supporters and clients of battered women’s shelters and other anti-violence groups may be surprised or even shocked to know that the current draft of the [Reproductive Health Act] would eliminate heightened penalties for an assault against a pregnant woman that results in the death of her unborn child,” she wrote. “Advocates against human trafficking may not be aware that the current version of the RHA virtually eliminates the possibility of requiring parental notification and regulating the transport of minors across state lines to obtain an abortion, which makes it more difficult to identify and prosecute pimps and other sex traffickers.”

Cardinal Dolan promised Cuomo months ago when the “freedom of choice” measure was initially proposed that the archdiocese would do its utmost to prevent its passage in the state legislature. In a January letter, he appealed to Cuomo to reconsider his support of that specific element of the act: “As we have discussed in the past, we obviously disagree on the question of the legality of abortion, but surely we are in equally strong agreement that the abortion rate in New York is tragically high. There was a time when abortion supporters claimed they wanted to make abortion ‘safe, legal, and rare.’ Yet this measure is specifically designed to expand access to abortion, and therefore to increase the abortion rate. I am hard pressed to think of a piece of legislation that is less needed or more harmful than this one.”

But Cuomo defended the necessity of the measure in an op-ed piece. He wrote: “In 1970, New York was one of the first states to decriminalize abortion. Three years later, in Roe v. Wade, the United States Supreme Court held that the United States Constitution protects the right of a woman to choose to terminate her pregnancy prior to fetal viability or throughout pregnancy when it is necessary to preserve her life or health. This has been the nation’s law established by the Supreme Court for the last 40 years.

“The law in New York, however, was not amended after Roe, making it outdated and inconsistent with federal law. The Women’s Equality Act codifies in state law the reproductive rights afforded by Roe….Contrary to the opposition’s assertion, this language in no way expands abortion rights but only codifies federal law. This is important because the Supreme Court could change in compositions, or opinion, and New York works to protect women’s right to choose.”

It is perhaps worth noting that while Cuomo argues that New York needs to update its laws to reflect changes that have occurred since Roe vs. Wade was issued, what he has not updated is the general understanding of fetal viability. The plan retains the 24-week cutoff included in Roe despite decades of advances in neonatal care that have lowered the viability threshold. Day, of Democrats for Life, reported in March that Cuomo was informed of such advances by physicians who visited him to lobby on behalf of the rights of “preemies.” Doctors told Cuomo then that in a politics-aside consideration of fetal viability, if a mother’s health is at risk at 24 weeks and beyond, “doctors can and should deliver her baby instead of aborting it,” wrote Day. She added that the doctors told Cuomo “after 24 weeks, nothing — and especially not terms as broadly permissive as emotional and psychological health — should justify ending a preemie’s life.”