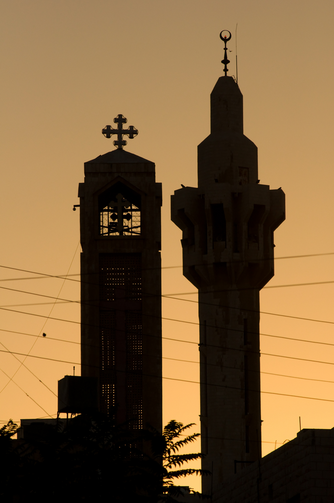 Washington, D.C. Ecumenical officers, bishops, scholars, students and interested parties from the Jewish, Muslim and Catholic communities have been meeting at the Catholic University of America to honor the fiftieth anniversary of Nostra Aetate, Vatican II’s epochal document on interreligious dialogue. From time to time, a speaker has risen above reviewing the history of the respective dialogues or spelling out the current agenda between the faiths, to ask about dialogue itself.

What have we learned about dialogue as a common undertaking? Is there an appropriate epistemology for dialogue? How does it work, especially when it works well?  These are the questions that hover around interfaith dialogue but are almost never addressed.

There were numerous asides in talks and testimonies in private sessions, however, that what carries dialogue forward and what overcomes obstacles that threaten to scuttle interfaith relationships is friendship. Indeed, intellectual and spiritual affection among those participants who have been engaged in dialogue with one another for years seemed obvious to me. (I have been a regular participant of Jewish dialogue for 24 years and had an irregular role in Muslim dialogues over the same period.)

Tuesday afternoon, Ann Garrido, a specialist in communication and peacemaking, hit the nail on the head with a quotation from Saint Augustine, “No one becomes known except through friendship.” (Nemo nisi per amicitiam cogniscitur.) Our grasp of truth, she argued, is enabled by our encounters with others. Friendship opens up knowledge to us in a way objective reason does not. Catholics and Jews, Jews and Muslims will only come to understand one another when they have achieved a degree of mature friendship with one another.

Wednesday afternoon Father Sidney Griffith, a world-renowned historian of Christian-Islamic relations, pointed to the pioneers of Catholic-Muslim dialogue, preeminently Louis Massignon, the French anthropologist and spiritual writer, as models of knowledge acquired in friendship. Massignon believed he was led back to his natal Catholicism from which he had lapsed by the intercession of the 10th-century Muslim mystic Mansur al-Hallaj. “It was a course of his inquiry that led him,” Griffith said, “to the recognition of a deep substratum of transcendental that underlay both Islam and Christianity.”

Griffith continued, “the recollection of such a strong spiritual communion with the ‘other’s’ experience of the transcendent as Massignon had is crucial for Nostra Aetate to have a life in the church beyond just that of a conciliar document.”

Several speakers also pointed to the declaration’s assertion that “The Church rejects nothing that is good and holy in those religions” as evidence of sympathetic appreciation on the part of the Council fathers for the religious experience of non-Christians. Likewise, their recognition that non-Catholics “precepts and teachings...reflect a ray of that truth which enlightens us all” also points to a knowledge received out of religious kinship.

Griffith also cited as evidence of spiritual friendship as a path to religious knowledge the seven-year correspondence between the American Trappist Thomas Merton and a Pakistani Muslim named Abd al-Aziz.  To his Pakistani correspondent Merton wrote, “As one spiritual man to another...I speak to you from my heart of obligation to study the truth in deep prayer and meditation, and bear witness to the light from the All-Holy God into this world of darkness where he is not known and not remembered.”

Faced with the disappointment at the meagre achievements of Islamic-Catholic dialogue these last decade and the violence and incomprehension that today afflicts relations between Islam and the West, the emeritus CUA professor made the case for “a longer, more intense colloquy” between Catholic and Muslim scholars. On the model of Massignon and Merton “the more intense colloquy” would rest in spiritual friendship which each party comes to recognize the Holy as the dialogue partners experiences it.

Drew Christiansen, S. J., Distinguished Professor of Ethics and Global Human Development at Georgetown University and former editor in chief of America, is a veteran of ecumenical and interfaith dialogue.